Dubai, United Arab Emirates--(Newsfile Corp. - May 26, 2022) - With many new P2E games being released, BFK Warzone is all set to launch the next big P2E shooting game this summer. Play-to-Earn gaming (P2E) has become very popular over the last few years, and during this time, the market has seen a surge in P2E games. 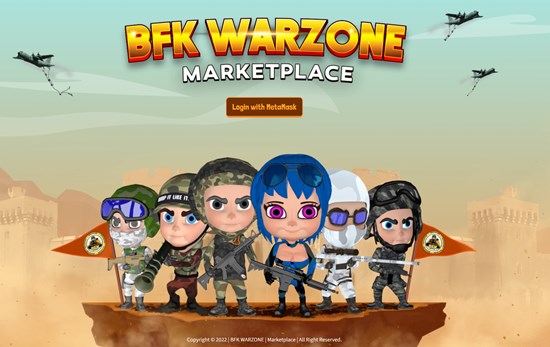 TGC International FZ-LLC, based in Dubai, announced one Play-to-Earn game in development in August 2021 and this game made its public debut on January 15th, 2022 but has been into development since Early Fall 2021.

BFK WARZONE is a Simple Hero 2D Shooter Multiplayer Matchmaking Game with a complex ecosystem built on the Binance Smart Chain and bridging to Ethereum, powered by its native token $BFK and used as the currency for the NFT Play-To-Earn (P2E) shooter game and NFT Marketplace.

The mission is to become the first 2D multiplayer shooter and blockchain gaming ecosystem worldwide to change how cryptocurrency projects should operate completely. A gaming battleground where gamers everywhere come together and immerse themselves in a AAA built environment, fast-paced 2D, P2E (play-to-earn), multiplayer, original characters gameplay, high-caliber graphics, and intense hyper engaging gameplay available and accessible from PC & Mobile.

The main goal of players is to control soldiers called Fortis ranging from Navy Seals, Paratroopers, Snipers, Medics, Machine Gunners, Special Forces & more, and use the Advanced Ranking system to level up and increase their NFT's ( Fortis, Weapons, Accessories, skins) value, reaching higher levels while collecting airdrops, experience, skills and unique power cards called Infinity Knoxs. It is the fight between the Binance SmartChain represented by the "Fort" (hence the name, Fortis) and the Aliens - the Ethereum Network called Ethereum Sentinels represented by the PVE mode where players fight the Aliens and protect the fort from earning loot and achievements.

For many players, an essential element of any Play-to-Earn game is the "earn". There are many ways to collect with BFK, and it's one of the few games where players can get started right away without having to "buy in" with a character first.

The game has many pillars under the "Earning" model. The main methods are ( Play/Trade-to-Earn, Stake-to-Earn, and Pay-to-Earn; Mine-to-Earn is planned for later release ), so the more the users play and level up users Forti, the stronger and more valuable it becomes.

Gamer's Forti characters can then be sold on the BFK marketplace at a price commensurate with its experience. Adding to this is the fact that the community controls the price of the soldiers and not the game; each NFT or soldier will be sold uniquely from the BFK Originals Market, adding a floor price. After that, the users will define the tradable price on the marketplace depending on offer and demand, which will really provide a community-controlled pricing mechanism.

There are three types of gameplay (Ranked, Team & Events) and one more coming in after the mobile release, which mimics the battle-royale mode, where players can collect a share of the pool as a reward, calculated and distributed by the number of players on the winning team. Another method is to level up Forti with experience and then auction them on the marketplace. There are also various NFT cards within the armory which can be bought, sold and traded with a limited kind of supply. Also, there is an experience point system that will allow users to rank their commander level higher, which is the user's profile, and allow users to collect airdrops while they rank themselves.

Most of the Soldiers on BFK WARZONE are purchasable NFTs from the original marketplace or from the community marketplace limited by supply and rarity also affected by the categories each one follows.

The infinity Knoxs are Elemental Powerful Energy Boosters that empower their bearer with unmatched powers over a period of time or even permanently. The Power Factor from these NFTs is applied to all Fortis without a Commander Profile, which is a pretty powerful effect. The Infinity Knoxs are limited by supply and rarity, and the available IFK's are Gold, Emerald and Platinum.

The weapons act as the power handle for the fortis. Each model has its own power attribution but the weapons are the master power dealers. These NFTs will be considered very rare as they affect totally how the game works and will allow players to mix and match soldiers with different ranked weapons to give an edge in the battle.

As part of the diversity factor in this game, BFK introduced 2 new smart contracts to add more variety to the game allowing players to access Accessories in types of NFTs and Skins that will allow the Fortis to have an extra edge of customizations and value to earn for the players, all of which will be also limited by supply and rarity.

BFK is merging physical toys with their NFTs characters, something that has never been done before. These toys will be mailed out as a companion to rare NFTs and will also come with an activation code for a surprise gift. Limited edition BFK toy soldiers will be offered to those who purchase a rare NFT, and these physical toys trigger a code for a special weapon or skin for the NFT playable character.

BFK WARZONE has designed and distributed hundreds of toys ready to bring into the Merchandise store. BFK has designed, modeled, and developed versions of the toy and partnered with overseas distributors to create. BFK aims to have a toy replica of each character in our store by the end of 2022.

The electronic NFT artifacts collectables are made from custom build units that enable its bearer access to several perks for in-game use called the IFS, these will be low powered units placed into users desk and turned on to represent also a very nice example of Tangible NFTs that expand the game even further on what BFK offers. Every player can purchase these artifacts online based on availability, which has never been seen before on a level of gaming.

There are even more types of NFTs getting into the game, but these will be announced while the system has started taking place effectively.

The highlight of these NFTs is mostly that they are showcased in the Bootcamp section of BFK WARZONE, which acts like a Learnatorium for new players. Find out more here Bootcamp

The Team at BFK warzone has shared more than seven decades of collective experience across the gaming, crypto, and entertainment sectors, the main focus is to gather every strength to put it in the right place. The Core Team is formed of 4 main members, and the technical team adds up to 20 members working around the clock into making BFK what it has become. The main operation is in Dubai, and the Company spreads connections over major parts of the world like the USA, Canada, Lebanon, Egypt, India and lately, Australia. Find out more here: Team BFK.

BFK WARZONE is Licensed by the Studio behind it TGC International FZ-LLC the Game is registered in UAE and Copyrighted there with its own certification and aims to fill its trademarks soon globally starting from UAE, which makes it legally able to sell merchandise in the respective registries. To find out more about the company and registration, please head over to their official website. Find out more here: Company.

As part of the contributed efforts by its CEO, BFK was present at the CryptoExpo in Dubai 2022 as VIP Sponsor, Blockchain World summit 2022 as Pitch Partner and CGC Gaming 2022 as Silver Sponsor and Speaker. Further partnerships and appearances have already been announced, and the closest one coming is Lbank's Crypto Mania happening in India 2022 at Bangalore. Find out more here: Media.

BFK Warzone has a dedicated team and a strong community with a solid history of development. For more information, check out their Telegram, the BFK Warzone website.

To view the source version of this press release, please visit https://www.newsfilecorp.com/release/125229