New York, New York--(Newsfile Corp. - November 21, 2021) - The SymBULL team is pleased to announce its reward-giving token. As the SymBULL token gains more traction, its billboard was sited at the Time Square, New York City, on November 13, 2021. The token has rewarded holders to the tune of $833,470.18 since it was officially launched on November 1, 2021. The SymBULL's displayed logo on the board showed "8% in BUSD rewards." 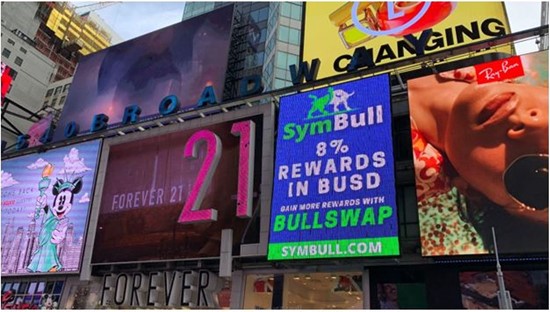 According to the team, the SymBULL token is deflationary and will gradually become scarcer with time while all holders are entitled to an 8% reward for every Buy/Sell transaction conducted on the Binance-pegged BUSD. Each investor will receive the reward automatically in their wallet.

Since its launch, the token has burned over 60% of the total supply while more supplies are burned daily. While holding the token, holders will earn BUSD per transaction. Holders can use the DAPP on the token's official website to track their rewards, the team explained.

First Ever Bull-Run Mechanism in Cryptocurrency: The Buy-Back reserve will get 3% of each transaction conducted with the token. The team explained that the collected fees will be converted into BNB after which they will be locked and stored in the token's contract.

To secure the contract and ensure that the BNB in the Strategic Reserves can't be withdrawn, the team coded it. It can only be used to buy the SymBULL tokens back from the open market so they can be completely burned.

The contract has two Buy Back Systems: Bull Run Buyback and Bull Rise System. The former is a large buyback used at specific moments for users to generate a big green card in the chart when it is most needed while the latter comes in handy at low volume. This triggers small buys to discourage holders from selling prematurely.

Users have two options to receive their rewards. They can receive them through the dAPP Dashboard on the token's website or get it credited into their wallet automatically. This implies that the SymBULL and Stable Yield work in parallel and generate a Compound Reflection effect that can have a considerable positive effect on users' holdings.

Liquidity Pool Stability: 3% of each transaction conducted through the token will be converted into liquidity to be used on PancakeSwap. The exchange is responsible for using its liquidity pool mechanism to fix a major DEXs' challenge: low liquidity.

A liquidity pool contains tradable pair of tokens and is credited by the project's smart contract with 3% of every buy/sell traction as $BNB and SymBULL.

Anti-Whale Built-In: Speaking further about the contract, the team explained that it contains a built-in anti-whale feature that deters holders from buying anything higher than 0.1% of the token's total supply at once and thus reduce to discourage big selloffs.

Buying and selling the token attracts a 14% transaction fee that is judiciously used thus:

The project is backed by a team of developers with some 30 years of banking experience looking to partner with DevTeamSix in the future.

To view the source version of this press release, please visit https://www.newsfilecorp.com/release/104566