Toronto, Ontario--(Newsfile Corp. - August 27, 2020) - FenixOro Gold Corp (CSE: FENX) (OTC Pink: FDVXF) (FSE: 8FD) is pleased to announce that it has received the results and analysis of the data from a recently completed ground magnetometry survey at its Abriaqui Project in Colombia.

The principal target at Abriaqui is a series of over 80 high grade, Buritica-style gold veins. These veins, which have been worked for over 80 years by Fenix' partner, a local mining cooperative, will be the primary focus of the Company's upcoming 6000m maiden drill program.

Additionally, the potential for porphyry-style gold mineralization was recognized earlier this year with the discovery of a small surface outcrop of magnetite-bearing potassic alteration. The outcrop sampled up to 1.1 grams per tonne gold which is representative of the grade in the better porphyry gold systems in Colombia and throughout the world. The location of this outcrop is coincident with a magnetic anomaly from a pre-existing geophysical program. This alteration type is typical of the gold-bearing portions of mineralized porphyry systems world-wide. In several gold districts along the 200+ kilometer long Cauca trend in Colombia, porphyry style mineralization has been discovered using magnetometry to map this type of magnetic rock alteration.

FenixOro recently commissioned a program of ground magnetics to define and hopefully expand the magnetic body in three dimensions. Results are summarized in Figure 1 which shows magnetic data (reduced to the pole), the contact of the diorite intrusion which hosts the majority of the mineralized gold veins, and faults interpreted from the magnetic data.

The data define a strong, near-surface magnetic anomaly of about one square kilometer. The body is centered on FenixOro ground and is open to the west, but it is not expected to continue far in that direction as the contact of the host diorite with the sedimentary package is right at the grid margin. FenixOro has recently acquired the seizure rights to the license which covers the area of this western extension from Polo Resources Limited (see Press Release dated August 25, 2020). The magnetic body is terminated on the south by a significant, northeast-trending fault. Three-dimensional analysis indicates that the body continues at approximately the same diameter to a depth of at least 700 meters below surface. The original surface outcrop area of mineralized alteration (area "A" in the figure) appears to be in a fault block at the northern end of the body. If so, the main body of the anomaly has been down dropped which explains the lack of surface exposure south of the fault.

The presence of such mineralization on surface and the comparison with other similar mineralized systems in this part of Colombia are greatly encouraging. Additionally, the development of 800+ vertical meters of high grade gold veins topographically above and lateral to the modeled porphyry horizon strengthens the analogy with the neighboring, multi-million ounce Buritica system where deep drilling beneath more than 1 km of vertical vein extent is targeting a similar magnetic anomaly (Continental Gold Press Release September 25, 2019).

The Phase 1 drill program, which is designed to test the vein sets north of the magnetic anomaly, is being modified to include at least one hole testing the magnetic body. The current level of erosion at Abriaqui is such that a porphyry body, if verified, should be fully preserved at reasonable drill depths. 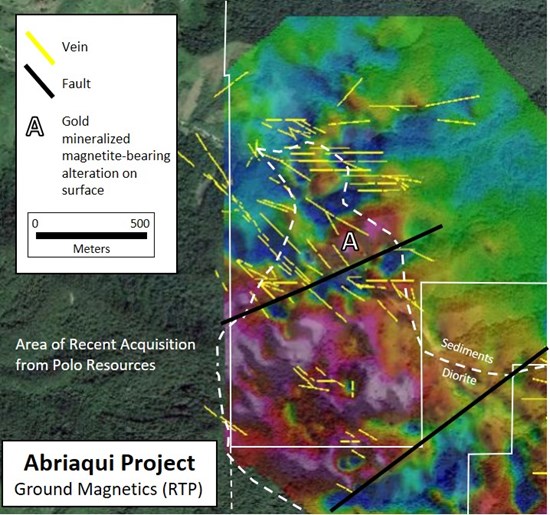 FenixOro Gold Corp is a Canadian company focused on acquiring gold projects with world class exploration potential in the most prolific gold producing regions of Colombia. FenixOro's flagship property, the Abriaqui project, is located 15 km west of Continental Gold's Buritica project in Antioquia State at the northern end of the Mid-Cauca gold belt, a geological trend which has seen multiple large gold discoveries in the past 10 years including Buritica and Anglo Gold's Nuevo Chaquiro and La Colosa. As documented in "NI 43-101 Technical Report on the Abriaqui project Antioquia State, Colombia" (December 5, 2019), the geological characteristics of Abriaqui and Buritica are very similar. The report also documents the high gold grade at Abriaqui with samples taken from 20 of the veins assaying greater than 20 g/t gold. Abriaqui has not yet been drilled but surface and underground geological mapping and sampling as well as a preliminary magnetometry survey have been completed. The property is drill-ready pending finalization of the government permitting process.

Fenix's VP of Exploration, Stuart Moller, led the discovery team at Buritica for Continental Gold in 2007-2011. The Buritica Mine currently contains measured plus indicated resources of 5.32 million ounces of gold (16.02 Mt grading 10.32 g/t) plus a 6.02 million ounce inferred resource (21.87 Mt grading 8.56 g/t) for a total of 11.34 million ounces of gold resources. Buritica is scheduled to commence production in 2020 with annual average production of 250,000 ounces at an all-in sustaining cost of approximately US$600 per ounce. Resources, cost and production data are taken from Continental Gold's "NI 43-101 Buritica Mineral Resource 2019-01, Antioquia, Colombia, 18 March, 2019"). Continental Gold was recently the subject of a takeover by Zijin Mining in an all-cash transaction valued at C$1.4 billion.

The comparison between Abriaqui and the nearby Buritica project is meant only to indicate the similarities between the two in terms of geological setting. FenixOro does not imply that exploration results and/or economic characteristics of a potential future mine at Abriaqui will be similar to those seen at Buritica. The sampling done at Abriaqui is in the form of rock chip and channel samples on surface and in shallow underground workings on vein exposures. The samples were prepared and analyzed at ALS laboratories in Medellin and Lima respectively. Samples were taken, prepared, shipped and analyzed following, industry standard QA/QC protocols and were submitted with certified reference standards.

Stuart A Moller, P. Geol. (British Colombia) Vice President of Exploration of FenixOro and a Qualified Person for the purposes of National Instrument 43-101, has reviewed and approved the technical information contained within this press release. Mr, Moller is a geologist with over 40 years of experience in world-wide mineral exploration including 10 years in Colombia.

To view the source version of this press release, please visit https://www.newsfilecorp.com/release/62644

Sign up to receive news releases by email for FenixOro Gold Corp. or all companies belonging to the Mining and Metals, Energy Metals industries.