Vancouver, British Columbia--(Newsfile Corp. - February 19, 2020) - Commander Resources Ltd. (TSXV: CMD) ("Commander") is pleased to report results from a 70 line kilometre Induced Polarization survey completed at the Company's Pedro Gold project in late 2019. The Pedro property is located 100 Km from Torreon, Mexico in the northeastern part of the State of Durango and approximately 30 km west of the town of Mapimi. The wholly owned 1,750 ha property was acquired directly by Commander in 2016 from Bearing Lithium.

The Pedro epithermal gold system was discovered by Bearing Resources Ltd. in 2012 during a regional program exploring for silver and is defined at surface by a combined gold (>20 ppb) and arsenic (> 100 ppm) soil anomaly with dimensions of 4000 metres by 1000 metres. Outcrop exposure comprises prominent hematite-stained silica-rich ridges of angular chalcedony fragments and silicified sedimentary rocks within an angular course breccia. The host rock to these breccias is mostly Ahuichila Formation conglomerate. The mineralization extends beneath post-mineral volcanic rocks, colluvium (range front fanglomerate) and alluvium to the north and east. Rock sampling of the exposed zones returned values in rock from background levels to a maximum of 2.3 gpt (197 samples with 53 greater than 0.25 gpt and 9 greater than 1 gpt). Samples were collected by previous operators, primarily Bearing Lithium and Newmont de Mexico in 2012 and 2013.

Following initial soil and rock sampling the property was briefly optioned by Newmont de Mexico, S.A de C.V who drilled 1,744m in 11 drill holes. The Newmont program was specifically designed to test for Carlin-style deposits within the Caracol Formation which underlies the Ahuichila Formation conglomerate and did not target the outcropping epithermal breccias. Their drilling did however encounter gold within epithermal breccias including in hole LP-013-R which returned a core length of 10.5 metres grading 0.51 gram per tonne gold from oxidized silicified conglomerate of the Ahuichila formation (see news release from Bearing Lithium dated July 3, 2014 and the associated QA/QC statement).

The recently completed induced polarization survey outlined the known zones and distinguished discreet deep features below the conglomerate which are interpreted to be feeders to the surface mineralisation. The IP targets show elevated resistivity with associated low to moderate chargeability. Results indicate that some surface exposed zones are stratabound along the basal contact of the Ahuichila formation while adjacent zones have a deep vertical expression reflecting possible feeder structures. In addition, the survey outlined targets within beneath post mineral cover, suggesting a much larger footprint to the system. See figure 1 and maps located on the company website at:

The Pedro epithermal gold system covers a large area with discreet linear silica breccia zones penetrating the basal contact of the Ahuichila Formation conglomerate and underlying calcareous siltstone of the Caracol Formation as well as possible lateral mineralization along the contact. Rock textures and the local presence of sinter suggest the upper levels of an epithermal system with potential for bulk mineable heap leach targets. The IP survey was important in identifying vertical zones beneath some surface exposures that are interpreted to be deep feeders in the system and where higher grades should be targeted. Commander plans to complete additional mapping and prospecting in the newly identified zones. As a Prospect Generator Commander will seek partners for the project.

Geofisica TMC from Durango Mexico was contracted to complete the seventy line-kilometre survey which was undertaken in late 2019. The survey had a line spacing of 100m and a pole-dipole array with nominal a spacing of 50 meters and ten dipoles for a model depth penetration of 250 m. Results were exported to RES2DINV for inversions in software developed by M.H. Loke. Data was interpreted by Joel Simard, P Geo./Geoph.

Historical samples mentioned in this release were prepared and analyzed by ALS Chemex at its labs in Chihuahua, Mexico, and Vancouver, Canada. Soils were analyzed as part of a multi-element inductively coupled argon plasma (ICP) package using aqua regia digestion with over-limit results being reanalyzed with assay procedures using ICP-AES. Gold analyses for rocks were performed on a 30-gram sub-sample by fire assay with an ICP-AES finish.

Robert Cameron, P. Geo. is a qualified person within the context of National Instrument 43-101 and has read and takes responsibility for the technical aspects of this release. In addition, Mr. Cameron was also the QP for the previous operator.

Commander Resources is a Canadian focused exploration company following the Prospect Generator business model that has leveraged its success in exploration through partnerships and sale of properties, while retaining equity and royalty interests. Commander has a portfolio of base and precious metal projects across Canada and significant equity positions in Maritime Resources Corp. (MAE-TSX.V) and Aston Bay Holdings (BAY-TSX.V). Commander also retains royalties from properties that have been partnered, optioned or sold. The Company has two active partnerships with Fjordland and HPX on its South Voisey's Bay Nickel project in Labrador and with Freeport McMoRan on its Burn copper/gold project in British Columbia. 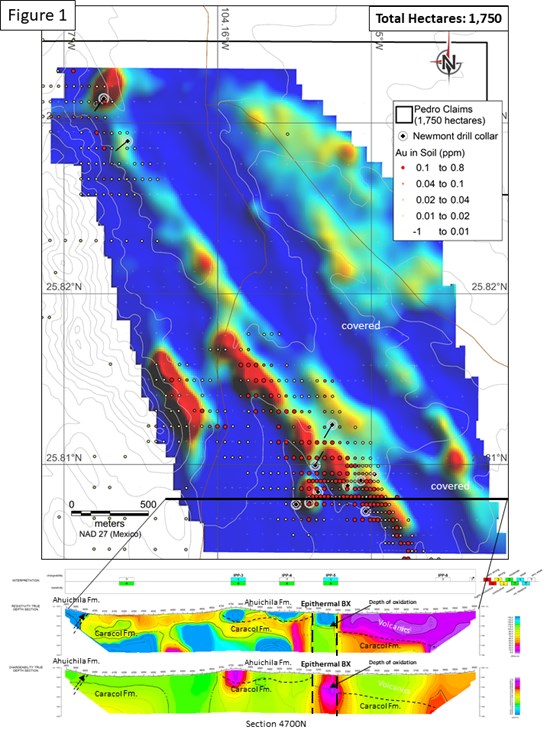 To view the source version of this press release, please visit https://www.newsfilecorp.com/release/52553