London, United Kingdom--(Newsfile Corp. - September 27, 2022) - Revolving around the strong, beautiful, and inspirational relationship between Jordi Molla' and Domingo Zapata, the documentary "The Private Lives of Jordi Molla' & Domingo Zapata," featuring Johnny Depp and Michelle Rodriguez, finally made its official worldwide premiere at the 79th Venice International Film Festival. With press conferences held starting from the 1st of September at hotel Excelsior the starting day event, before and after the Premiere on the 10th, this event marked the first international introduction to the much-awaited documentary created by Publikro London and directed by Giuseppe Ferlito and was followed from the many who came from all over the world to see the Great event! 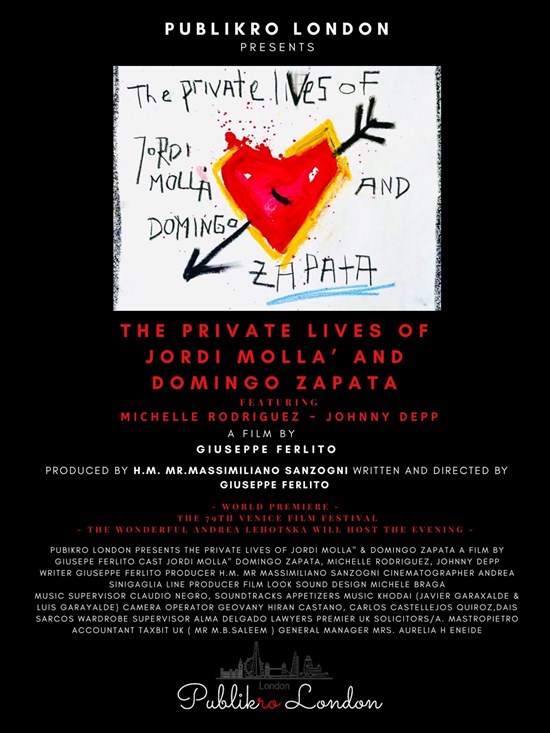 The event took place in Cinema ASTRA Via Corfù on September 10th, Saturday, and was presented by Mrs. A.H. Eneide as Executive Producer and Godmother of Excellence on Behalf of Publikro London. After the premiere of the 65-minute-long documentary, the entire Team stayed back for a press conference in the presence of La Repubblica, Corriere Della Sera, Rai, Media set and a team of three reporters.

It was followed by an insightful Q&A session.

"The Private Lives of Jordi Molla' & Domingo Zapata" brings under the limelight the friendship shared between two of the most renowned artists; Jordi Molla', known for his appearance in Bad Boys II and Blow, and Domingo Zapata, a famous wall-street businessman. It takes the viewers through the journey of how Molla and Zapata, who met 15 years ago in Los Angeles, helped bring out the passionate artists hidden within each other. When the two met, Jordi was making it big in the world of films while Domingo was establishing a name for himself on Wall Street and in the music industry. Both these individuals have grown exponentially as artists by staying in each other's company and feeding off each other's creativity. Through this documentary, the team aims to instills hope in the hearts of those stuck in life's cycle and inspire aspiring young artists to pursue their passion. 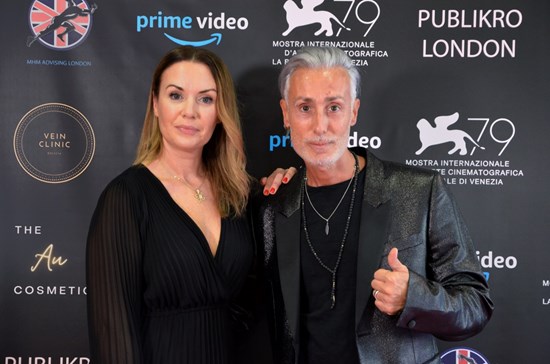 The shooting of the documentary began almost a decade ago, and the team traveled to Los Angeles, Miami, New York, Majorca, and Rome to capture the critical elements of the documentary. It features renowned actors such as Johnny Depp and Michelle Rodriguez alongside Jordi Molla' and Domingo Zapata. Released in [September 22] and presented as a "short "on a special private screening at the Faena Theatre on November 23rd in 2021, The Private Lives of Jordi Molla' & Domingo Zapata is the result of the combined efforts of H.M. Mr. Max Sanzogni (also known as Max), the President of Publikro London, and Giuseppe Ferlito, a renowned film director.

Max, is an Italian by birth but has spent a significant part of his life in London and the United States. He is known for being the Production Supervisor for Specter 007, the Justice League project, working in the Art Department for Game of Thrones, and co-producing Abstract, a Netflix Original production. Before he stepped into film production, Max was deeply immersed in the corporate world.

Not being from a filmmaking or entertainment background, he spent time working at Rebournmust Corporation in New York as the Vice President. While he was there, he founded the Mhm Advising Holding Network in London. Giuseppe Ferlito, an Italian film director, is not unknown in the world of filmmaking. Riddick, the blockbuster with Vin diesel, Colombiana with Zoe Saldana, and Presto Farà Giorno are among the few in his list of widely known and many acclaimed projects.

All individuals that have come together to bring this project to fruition share a common dream, "to create something that remains that leaves a positive idea of ​​life, of the people's dreams."

Publikro London is a UK-based production company with H.M. Mr. Max Sanzogni as its president. It is known for its projects, such as Marvel's "production services for Captain America civil War." It was founded about 18 years ago with an aim to promote emerging artists.

To view the source version of this press release, please visit https://www.newsfilecorp.com/release/138427

Sign up to receive news releases by email for VOT Sales or all companies belonging to the Banking/Financial Services, Internet Technology, Health, Advertising industries.