Portland, Oregon--(Newsfile Corp. - August 24, 2022) - Nonprofit Farm Forward has joined a consumer class action lawsuit against Whole Foods alleging that the retail giant is deceiving shoppers about beef products in its stores. Since 1981, Whole Foods has claimed that all of the animals within its supply chain are raised without antibiotics, but an independent laboratory found antibiotic residue in "antibiotic free" meat purchased from a California Whole Foods store. Antibiotic free meat can cost as much as 20 percent or more than conventional meat, and surveys show 75 percent of consumers are willing to pay more for it. The use of subtherapeutic antibiotics has implications for animal welfare and public health.

In April 2022, Farm Forward released results of a program that tested Whole Foods meat for antibiotic residues. Among other findings, Farm Forward found residue of an antibiotic that can be used to promote the growth of animals in a product labeled "Organic" and "antibiotic free." Factory farms that provide meat to retailers like Whole Foods depend on antibiotics to keep animals alive in filthy, crowded conditions. Farm Forward's findings were bolstered by a peer-reviewed study published in Science which presents empirical evidence that a significant percentage—up to 22 percent—of cattle within the Animal Welfare Certified program, which is used by Whole Foods, have come from feedyards where testing suggests antibiotics were administered routinely.

"We have hard evidence not only that meat on Whole Foods shelves could be marketed deceptively as antibiotic free, but that the problem extends to the entire industry," says Andrew deCoriolis, Executive Director of Farm Forward. "Industry insiders know that meat is being marketed deceptively as "antibiotic free." Rather than thoroughly test to ensure the accuracy of its own antibiotic claims, Whole Foods has profited while deceiving its customers."

Humanewashing by Whole Foods has succeeded in persuading shoppers that Whole Foods sells nothing but the best, and that the farms supplying meat to Whole Foods provide significantly better living conditions than they typically do. Farm Forward wants Whole Foods to verify that subtherapeutic and growth-promoting antibiotics are not used in any aspect of its meat supply chain, and to be honest with the public about which claims the retailer can, and cannot, guarantee. Additionally, Farm Forward wants retailers implicated in profiting from consumer deception to fund an independent watchdog agency that will work in consumers' interest to assist supermarkets in fighting meat industry misinformation. 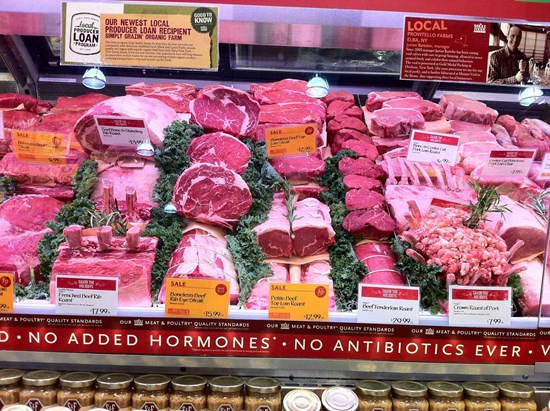 Whole Foods Market meat counter with "No Antibiotics, Ever" signage.

To view the source version of this press release, please visit https://www.newsfilecorp.com/release/134701

Sign up to receive news releases by email for Farm Forward or all companies belonging to the Food/Beverages, Retail, Agriculture industries.