Vancouver, British Columbia--(Newsfile Corp. - May 20, 2021) - Capitan Mining Inc. (TSXV: CAPT) ("Capitan" or the "Company") is pleased to report results from eight drill holes from its 2021 program on the Capitan gold zone.

The purpose of these drillholes was threefold:

Holes 21-CARC-21,22, 25 and 28 were collared in the eastern portion of Capitan Deposit area, in a region with very sparse drilling and surface exploration (see Figure 1). The holes were designed to target the down-dip and on-strike extensions of the Hanging Wall Zone, that was intersected in holes 20-CARC-15 and 18 as well as in historic core holes CDDH-08-03 and CDDH-11-10. All holes successfully intersected multiple, low grades zones of Hanging wall style mineralization, with the best intercepts including 21.3m of 0.19 g/t Au eq in hole 21-CARC-21, 25.9m of 0.19 g/t Aueq in hole 21-CARC-25 and 45.7m of 0.15 g/t Aueq in hole 21-CARC-28. Additionally, the drillholes successfully extended the on-strike extent of the Capitan Hill deposit, in this area, by 125m to the east, and the down-dip extent between 75m and 150m respectively. Based on the location and results returned from the holes above, it is interpreted that holes 21-CARC-21, 22, and 28 were drilled well below the main ore shoot that was being targeted, with hole 21-CARC-28 intersecting the zone slightly up-dip from the main ore shoot.

Drillholes 21-CARC-23 and 27 were collared within the east-central portion of the Capitan Main target area and were designed to test the down-dip extension of the main Capitan Hill zone on sections 50 and 000 respectively. Hole 21-CARC-23 ran into technical issues after intersecting the Hanging wall zone. The hole returned multiple, low grade values, including 13.7m of 0.29 g/t Aueq before being terminated prior to the Capitan Main zone. Hole 21-CARC-27 was a large (150m) step-out from hole 20-CARC-17 (see Figure 2) and returned multiple, low-grade intervals for most of its length. The most significant intersections include 45.7m of 0.21 g/t Aueq and 18.3m of 0.21 g/t Au.

Capitan's CEO, Alberto Orozco, stated: "I'm pleased to report that all of our reported drill holes to date have intersected gold mineralization, highlighting the significant scale of the mineralized system at our Peñoles project. We are well underway to expanding the mineralization from the existing inferred resource at Peñoles with mineralization remaining open in most directions and at depth. With our recently announced private placement completed, Capitan Mining is fully funded for the next year." 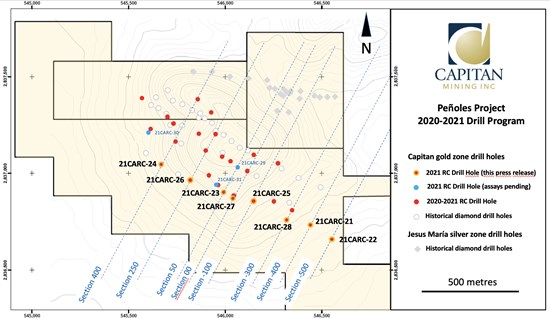 Note: Only drill intercept lengths are reported in the table. Drill holes with an angle of 70 degrees should be closest to true width of the main zone of mineralization. *gold equivalent calculated at 80:1 ratio **No significant values 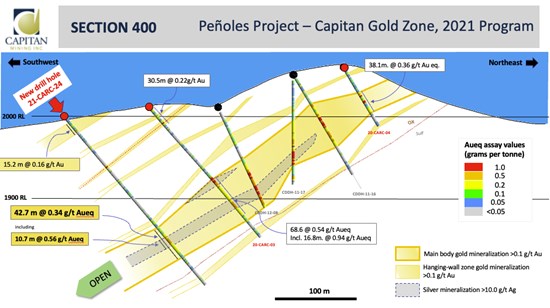 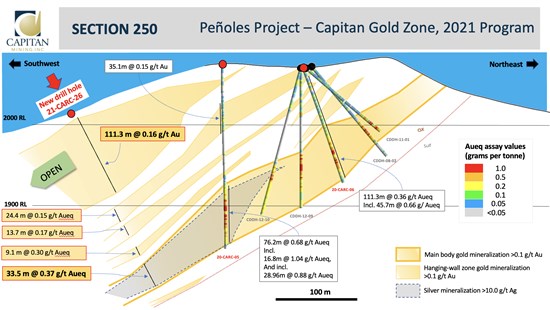 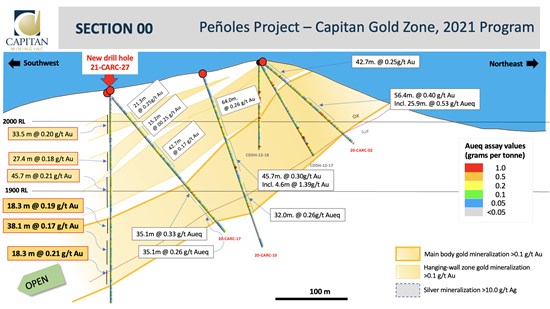 The scientific and technical data contained in this news release pertaining to the Peñoles Project was reviewed and approved by Marc Idziszek, P.Geo, a non-independent qualified person to Capitan Mining, who is responsible for ensuring that the technical information provided in this news release is accurate and who acts as a "qualified person" under National Instrument 43-101 Standards of Disclosure for Mineral Projects.

RC drill samples from the Peñoles Project are collected and split at the drill site using a Gilson Universal Splitter. The samples are stored in either plastic bags (dry) or micropore bags (wet) and secured with plastic zip-ties and then transported to the preparation laboratory of Bureau Veritas in Hermosillo, Sonora. The sample pulps are then transported to the Bureau Veritas' laboratory in Vancouver, where they are assayed for gold by fire assay with atomic absorption finish (FA430 assay method code; 0.005 to 10 ppm detection limit). Samples over 10 ppm Au are assayed with gravimetric finish (Assay code FA530). All samples are also assayed by ICP-ES (code AQ300) for a suite of 33 elements.

All summarized intervals reported in this press release were calculated using a 0.10 ppm Au cut-off grade. Intervals contain no more than 3 metres of internal dilution. High grades have not been capped.

Capitan Mining is a well-funded junior exploration company focused on its 100% owned gold and silver Peñoles Project in Durango, Mexico. The company is led by a management team that has successfully advanced and developed several heap leach operations in Mexico over the past 16 years. More information for the Company can be found at www.capitanmining.com.

ON BEHALF OF CAPITAN MINING INC.

Certain statements in this press release may be considered forward-looking information. These statements can be identified by the use of forward-looking terminology (e.g., "expect"," estimates", "intends", "anticipates", "believes", "plans"). Such information involves known and unknown risks -- including the availability of funds, the results of financing and exploration activities, the interpretation of exploration results and other geological data, or unanticipated costs and expenses and other risks identified by Capitan in its public securities filings that may cause actual events to differ materially from current expectations. Readers are cautioned not to place undue reliance on these forward-looking statements, which speak only as of the date of this press release.

To view the source version of this press release, please visit https://www.newsfilecorp.com/release/84628

Sign up to receive news releases by email for Capitan Mining Inc. or all companies belonging to the Mining and Metals, Precious Metals industries.