Mr. Friedland made the announcement in advance of his participation in a virtual fireside discussion at the 2021 Goldman Sachs Copper Day later today.

In support of the Paris Agreement on climate change, and in the spirit of the commitments at the recent virtual global climate conference by the Chinese and American governments to sharply cut emissions, Ivanhoe Mines has committed to work with its joint-venture partners and leading underground mining equipment manufacturers to ensure that Kamoa-Kakula becomes the first net-zero operational carbon emitter among the world's top-tier copper producers.

Since the Kamoa-Kakula mine and concentrator plant already are powered by clean, renewable hydro-generated electricity, the focus of the company's net-zero commitment will be on electrifying the project's mining fleet with new, state-of-the-art equipment powered by electric batteries or hydrogen fuel cells.

"Emissions from all gasoline and diesel vehicles not only harm our planet, they harm our health. Electric and fuel-cell vehicles now include cars, transit buses, trucks of all sizes, and even big-rig tractor trailers," said Mr. Friedland.

"Industrial-scale electric and fuel-cell mechanized underground mining equipment currently is being tested around the world, and it is only a matter of time until they become available for commercial use in the size that we require for our large-scale, bulk mining operations. We plan to be among the first of the early adopters of the technology."

Kamoa-Kakula is expected to soon begin producing its first copper concentrates. Kakula is projected to be the world's highest-grade major copper mine, with an initial mining rate (Phase 1) of 3.8 million tonnes per annum (Mtpa) at an estimated early average feed grade of more than 6.0% copper, ramping up to 7.6 Mtpa (Phase 2) in Q3 2022. Phases 1 and 2 combined are forecast to produce approximately 400,000 tonnes of copper per year. Based on independent benchmarking, the project's phased expansion scenario to 19 Mtpa would position Kamoa-Kakula as the world's second-largest copper mining complex, with peak annual copper production of more than 800,000 tonnes.

"Kamoa-Kakula already is powered by one of the greenest electricity grids in the world, so we have a considerable head start in achieving our net-zero goal," said Mr. Friedland.

"Once we achieve net-zero Scope 1 and 2 emissions, we will turn our focus on achieving a net-zero total emissions project, which will include Scope 3 emissions. We have the opportunity to be an industry leader in the fight against climate change, and we look forward to spearheading the drive for a future free of fossil fuels, initially at Kamoa-Kakula, but eventually at all of our mines - for a better tomorrow for our children and grandchildren. Through collaboration and creativity, we can be a positive force in addressing our industry's most pressing challenges, working together to find the right path forward.

"The carbon footprint of production will eventually be priced into finished copper, enabling buyers to better evaluate how much the metal contributes to the environmental impact of their products. This will become increasingly important to purchasers of copper-intensive products, such as electric vehicles.

Mark Farren, Kamoa Copper's CEO, remarked: "Given the extraordinarily high copper grades and access to abundant clean, renewable hydropower, Kamoa Copper is uniquely positioned to achieve the net-zero operational target much sooner than other major copper producers. We are working closely with our mining equipment suppliers to decrease the use of fossil fuels in our mining fleet, and evaluate the viability, safety and performance of new electric, hydrogen and hybrid technologies. We plan to introduce them into our mining fleet as soon as they become commercially available.

"Unlike diesel equipment, electric underground mining equipment produces zero emissions, thus making for more sustainable operations while also increasing the health and safety of those working in the mine. Ventilation costs also would be significantly reduced with electric equipment."

A 2020 independent audit of Kamoa-Kakula's greenhouse gas intensity metrics performed by Hatch Ltd. of Mississauga, Canada, confirmed that the project will be among the world's lowest greenhouse gas emitters per unit of copper produced. 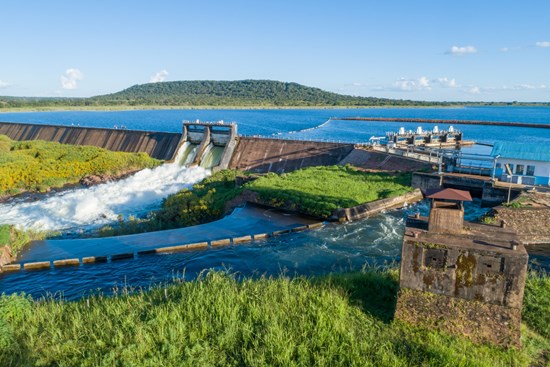 The dam at the Mwadingusha hydropower complex, one of two public-private partnerships that Kamoa Copper has with the DRC state-owned power company to provide Kamoa-Kakula with 240 megawatts of long-term, permanent renewable electricity.

The Kamoa-Kakula Copper Project is a joint venture between Ivanhoe Mines (39.6%), Zijin Mining Group (39.6%), Crystal River Global Limited (0.8%) and the Government of the Democratic Republic of Congo (20%). 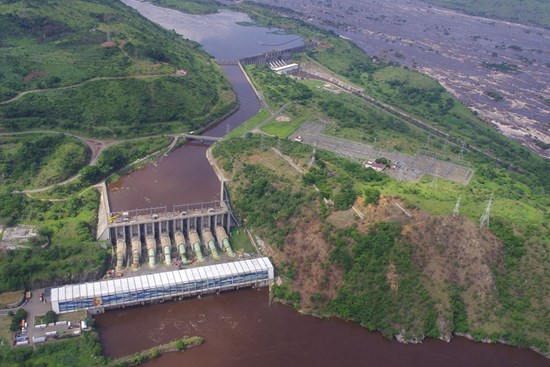 Last month, Kamoa-Kakula joint-venture's energy company signed an agreement with the DRC's state-owned power company to upgrade Turbine 5 at the Inga II hydropower complex on the Congo River. Aerial view of the Inga I (rear) and Inga II (front) hydropower plants, with the penstock funneling water to turbine 5 at Inga II circled in red 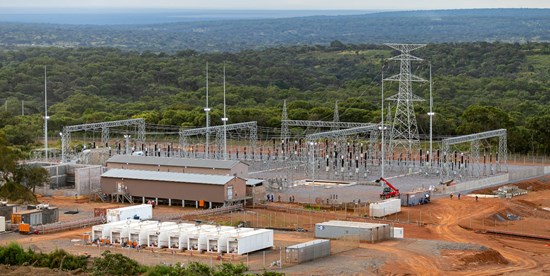 Kamoa-Kakula's new 220-kilovolt substation that is energized with hydropower from the national grid.

Ivanhoe Mines is a Canadian mining company focused on advancing its three principal joint-venture projects in Southern Africa: the development of major new, mechanized, underground mines at the Kamoa-Kakula copper discoveries in the DRC and at the Platreef palladium-platinum-nickel-copper-rhodium-gold discovery in South Africa; and the extensive redevelopment and upgrading of the historic Kipushi zinc-copper-germanium-silver mine, also in the DRC.

Kamoa-Kakula is expected to begin producing copper in late May or early June 2021 and, through phased expansions, is positioned to become one of the world's largest copper producers. Kamoa-Kakula and Kipushi will be powered by clean, renewable hydro-generated electricity and will be among the world's lowest greenhouse gas emitters per unit of metal produced. Ivanhoe also is exploring for new copper discoveries on its wholly-owned Western Foreland exploration licences in the DRC, near the Kamoa-Kakula Project.

As well, all of the results of the Kakula definitive feasibility study, the Kakula-Kansoko pre-feasibility

study and the Kamoa-Kakula preliminary economic assessment, constitute forward-looking statements or information, and include future estimates of internal rates of return, net present value, future production, estimates of cash cost, proposed mining plans and methods, mine life estimates, cash flow forecasts, metal recoveries, estimates of capital and operating costs and the size and timing of phased development of the projects. Furthermore, with respect to this specific forward-looking information concerning the development of the Kamoa-Kakula Project, the company has based its assumptions and analysis on certain factors that are inherently uncertain. Uncertainties include: (i) the adequacy of infrastructure; (ii) geological characteristics; (iii) metallurgical characteristics of the mineralization; (iv) the ability to develop adequate processing capacity; (v) the price of copper; (vi) the availability of equipment and facilities necessary to complete development; (vii) the cost of consumables and mining and processing equipment; (viii) unforeseen technological and engineering problems; (ix) accidents or acts of sabotage or terrorism; (x) currency fluctuations; (xi) changes in regulations; (xii) the compliance by joint venture partners with terms of agreements; (xiii) the availability and productivity of skilled labour; (xiv) the regulation of the mining industry by various governmental agencies; (xv) the ability to raise sufficient capital to develop such projects; (xvi) changes in project scope or design; and (xvii) political factors.

The company's actual results could differ materially from those anticipated in these forward-looking statements as a result of the factors set forth below in the "Risk Factors" section in the company's Q3 2020 MD&A and its current annual information form.

To view the source version of this press release, please visit https://www.newsfilecorp.com/release/82938