New York, New York--(Newsfile Corp. - April 15, 2021) -  Faruqi & Faruqi, LLP, a leading national securities law firm, is investigating potential claims against Range Resources Corporation ("Range Resources" or the "Company") (NYSE:RRC) and reminds investors of the May 3, 2021 deadline to seek the role of lead plaintiff in a federal securities class action that has been filed against the Company. 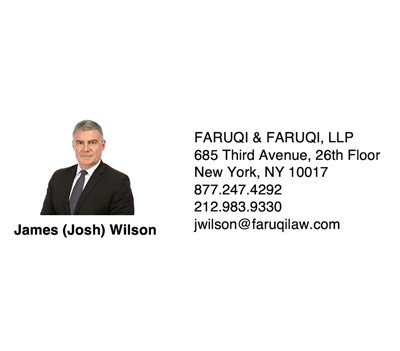 As detailed below, the lawsuit focuses on whether the Company and its executives violated federal securities laws by making false and/or misleading statements and/or failing to disclose that: (1) Range Resources had improperly designated the status of its wells in Pennsylvania since at least 2013; (2) the foregoing conduct subjected the Company to a heightened risk of regulatory investigation and enforcement, as well as artificially decreased the Company's periodically reported cost estimates to plug and abandon its wells; (3) the Company was the subject of a Department of Environmental Protection ("DEP") investigation from sometime between September 2017 to January 2021 for improperly designating the status of its wells; (4) the DEP investigation foreseeably would and ultimately did lead to the Company incurring regulatory fines; and (5) as a result, the Company's public statements were materially false and misleading at all relevant times.

On February 10, 2021, shortly before the close of the trading session, the DEP issued a press release announcing that Range Resources had paid a $294,000 civil penalty to the agency on January 8, 2021 for violating the 2012 Oil and Gas Act. The DEP had begun investigating the Company after the agency found conflicting and inaccurate information on the status of a Company well in Fayette County, Pennsylvania-specifically concerning whether the well in question was correctly designated as inactive for the purposes of DEP regulation. After subpoenaing Range Resources for information on other wells the Company had requested to designate as inactive, the DEP found that "between Tuesday, July 16, 2013, and Monday, October 11, 2017, 42 of Range Resources' conventional wells were placed on inactive status but were never used again" and that several of the Company's "wells had not been in use for 12 months at the time Range Resources submitted its applications for inactive status," even though "after 12 consecutive months of no production, the well would be classified as abandoned and must be plugged." In addition to paying the DEP's civil penalty, Range Resources was ultimately required to plug the wells the agency identified as having no viable future use to remediate the issue.

Faruqi & Faruqi, LLP also encourages anyone with information regarding Range Resources' conduct to contact the firm, including whistleblowers, former employees, shareholders and others.

To view the source version of this press release, please visit https://www.newsfilecorp.com/release/80597