Vancouver, British Columbia--(Newsfile Corp. - November 30, 2020) - Capitan Mining Inc. (TSXV: CAPT) ("Capitan" or the "Company") is pleased to report results for the first seven drill holes from the current and on-going 6,000 metre reverse circulation (RC) drill program at the Peñoles Project (the "Project") in Durango, Mexico. This initial drill campaign is focused on testing the continuity of known gold-silver zones at the Capitan Hill Deposit, both along strike and down-dip of the March 2015, 43-101 compliant, inferred resource outline, as well as infill significant gaps within the resource model. The first seven drill holes of the program are presented herein, all of which intersected Capitan Hill style mineralization that is consistent in grade and width with previous drilling.

Capitan's CEO, Alberto Orozco, stated: "We are very excited to receive the first batch of drill hole assays from our program on Capitan Hill at the Peñoles Project. This first batch of drill holes demonstrates strong continuity of gold-silver mineralization, particularly down- and up-dip; and they are also showing silver mineralization at depth to be more significant than previously thought. Drill hole 20-CARC-05 had a wider and richer intercept of silver mineralization than we had anticipated, demonstrating there is still much more to understand about the potential of the mineralization at Capitan Hill. It is important for Capitan Mining to be delivering on its program as scheduled; from the permitting stage to the commencement of our drill program, and to provide steady news flow as promised. We will continue working through the end of the year to complete the remaining of our planned 3,000 metres of drilling, which will be followed by an additional 3,000 metres of drilling in early 2021." 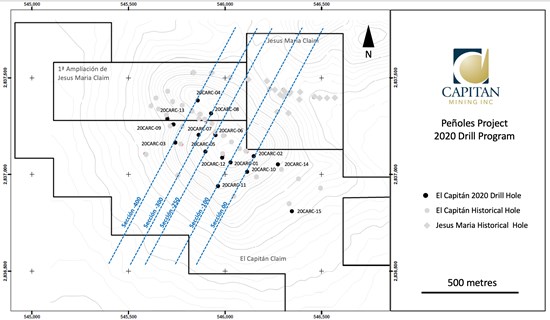 All of the expansion holes were oxidized through their entire length, with RC holes 20-CARC-01 and 03 getting into sulphide mineralization at drill hole depths of 173.7 m and 184.4 m respectively.

RC Hole 20-CARC-07 was drilled on section 300, between previously drilled diamond drill holes CDDH-08-05 and CDDH-12-12 to infill a large >100 m wide gap. The hole cut the main mineralized zone in three, narrowly separated, intercepts that are bound by anomalous gold mineralization. These include 22.9 m of 0.2 g/t gold, 35.1 m of 0.27 g/t gold and 50.3 m of 0.22 g/t gold. The hole bottomed in anomalous mineralization and could not be drilled to its completed depth due to technical issues.

RC Hole 20-CARC-02 was drilled on section 000 and designed to test a >100 m wide gap between CDDH-12-17 and surface. The hole successfully intersected the Capitan Hill Main Zone and confirmed its presence up-dip, to surface, and was mineralized almost over its entire length. Significant values include 0.284 g/t gold over 29 m and 56.4 m of 0.398 g/t gold.

Drilling prior to the March 2015 resource statement at Capitan Hill indicated the possibility of additional zones of oxidized, gold-silver mineralization located in the hanging wall to the Capitan Hill Main Zone. However, due to a lack of drilling, the significance of these zones was poorly understood and precluded from being captured in the March 2015 resource estimate. 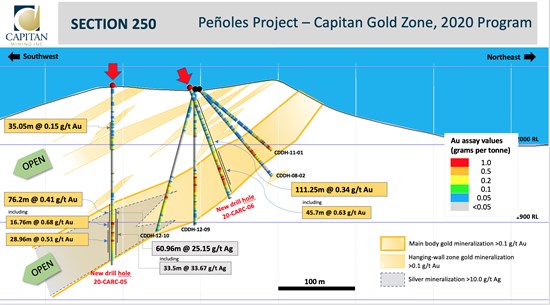 The scientific and technical data contained in this news release pertaining to the Peñoles Project was reviewed and approved by Marc Idziszek, P.Geo, a non-independent qualified person to Capitan Mining, who is responsible for ensuring that the technical information provided in this news release is accurate and who acts as a "qualified person" under National Instrument 43-101 Standards of Disclosure for Mineral Projects.

RC drill samples from the Peñoles Project are collected and split at the drill site using a Gilson Universal Splitter. The samples are stored in either plastic bags (dry) or micropore bags (wet) and secured with plastic zip-ties and then transported to the preparation laboratory of Bureau Veritas in Hermosillo, Sonora. The sample pulps are then transported to the Bureau Veritas' laboratory in Vancouver, where they are assayed for gold by fire assay with atomic absorption finish (FA430 assay method code; 0.005 to 10 ppm detection limit). Samples over 10 ppm Au are assayed with gravimetric finish (Assay code FA530). All samples are also assayed by ICP-ES (code AQ300) for a suite of 33 elements.

All summarized intervals reported in this press release were calculated using a 0.10 ppm Au cut-off grade. Intervals contain no more than 3 metres of internal dilution. High grades have not been capped.

Capitan Mining is a well-funded junior exploration company focused on its 100% owned gold and silver Peñoles Project in Durango, Mexico. The company is led by a management team that has successfully advanced and developed several heap leach operations in Mexico over the past 16 years. More information for the Company can be found at www.capitanmining.com.

ON BEHALF OF CAPITAN MINING INC.

Certain statements in this press release may be considered forward-looking information. These statements can be identified by the use of forward-looking terminology (e.g., "expect"," estimates", "intends", "anticipates", "believes", "plans"). Such information involves known and unknown risks -- including the availability of funds, the results of financing and exploration activities, the interpretation of exploration results and other geological data, or unanticipated costs and expenses and other risks identified by Capitan in its public securities filings that may cause actual events to differ materially from current expectations. Readers are cautioned not to place undue reliance on these forward-looking statements, which speak only as of the date of this press release.

To view the source version of this press release, please visit https://www.newsfilecorp.com/release/69142

Sign up to receive news releases by email for Capitan Mining Inc. or all companies belonging to the Mining and Metals, Precious Metals industries.