Big Shot has been downloaded to over 30,000 iPhone and Android devices

"Big Shot is getting big time endorsements from users, celebrities, and sports leagues," says Trevor Doerksen, CEO of ePlay. "The response has been great and we are thrilled with the early progress which surpasses previous apps and games for CBS, ESPN, and others."

The Company enabled advertising for the opening week of the 2019/20 NBA season - one of the 3 key revenue sources for Big Shot. Last month, eSports revenue is possible for the first time in Big Shot and new skins are being created and some added for Big Shot user avatars. In-app purchases of clothes, and upgrades such as a Swap are features now directly drive Big Shot revenue in the estimated USD$61.3B mobile gaming industry mobile gaming industry.

Today, ePlay is able to continue to reveal actual user data in which to monetize and focus core growth. Understanding ePlay direct-to-consumer revenue potential is a function of downloads, engagement, and Average Revenue Per Daily Active User (ARPDAU).

ePlay continues to communicate how mobile games like Big Shot earn esports and other revenue. The Company combines 3 in-app revenue sources plus ePlay is a diversified mobile sports, esports and entertainment game developer and publisher. With the official launch and early data points, the Company can clearly demonstrate revenue potential. The Company's revenue actuals are still nascent given 39 days of data available since launch. The following updated models based on ePlay monthly actuals inform revenue potential. 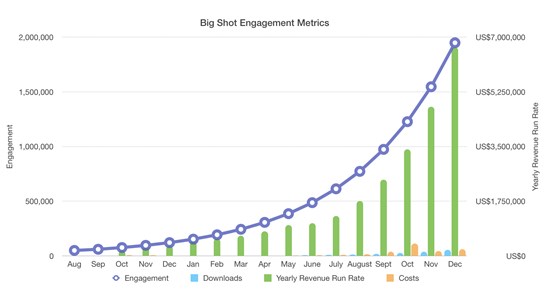 To view the source version of this press release, please visit https://www.newsfilecorp.com/release/50296