Vancouver, British Columbia--(Newsfile Corp. - November 13, 2019) - ePlay Digital Inc. (CSE: EPY) today announced the Big Shot Basketball mobile game was enabled for advertising revenue to coincide with fast-pace of downloads during the opening week of the 2019/20 NBA season. In addition, the Company can release that Big Shot has been downloaded over 20,000 times as the Company officially launched the augmented reality fantasy sports mobile game in Toronto and Los Angeles on Oct. 22 to coincide with the opening of the NBA season.

The company has previously announced that Big Shot would be monetized with advertising, in-app purchases, and eSports Prizing - ad inventory is now driving revenue for the first time. In addition, ePlay leverages its intellectual property as a template for expansion of monetization, revenue, partnerships, acquisitions, and game titles.

"ePlay is thrilled that the NBA season has started off so well allowing the Company to focus on increasing downloads, user engagement and revenue," says Trevor Doerksen, CEO of ePlay. "The Company will be adding content payloads to Big Shot to fully enable monetization for ads, esports, and in-app purchases."

The addition of esports revenue sources is in the final stage of beta testing and new skins are being created for Big Shot user avatars to be released during the holiday season. Adding more skins and esports will round out the next steps in launching revenue in the estimated USD$61.3B mobile gaming industry.

Monetizing An Engaged Mobile Audience
Today, ePlay is able to continue to reveal actual user data in which to monetize and focus core growth:

Understanding monetization in mobile gaming and esports is a function of downloads, engagement, and Average Revenue Per Daily Active User (ARPDAU).

Modelling Early Actuals
ePlay has been using its releases to help communicate how mobile games like Big Shot earn revenue. The Company combines 3 in-app revenue sources plus ePlay is a diversified mobile sports, esports and entertainment game developer and publisher. With the official launch and a few early data points, the Company can demonstrate revenue potential. The Company's revenue actuals are still nascent given 9 days of data is available since launch and all 3 revenues sources are still in beta testing, however the following standardized models with important variables provided and early actuals identified. 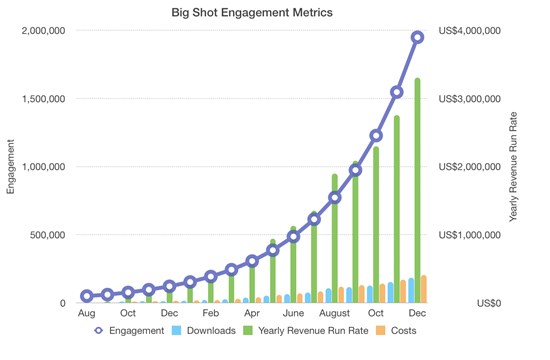 About ePlay
ePlay Digital Inc. is a mobile game creator and publisher specializing in sports, esports and entertainment augmented reality titles, including their new flagship title Big Shot Basketball. ePlay is operated by an award-winning team of sports, gaming and esports leaders as well as broadcast and digital technology industry experts, software engineers and athletes who have brought dozens of game titles to market for companies including Time Warner Cable, ESPN, Sony Pictures, AXS TV, Intel, AXN, Fiat, CBS, and others.

To view the source version of this press release, please visit https://www.newsfilecorp.com/release/49652