The success of the 2018 exploration program which included +4,400 metres of drilling, airborne geophysics, rock and soil sampling, and additional claim staking, proved the prospectivity of the Lawyers project, leading Benchmark to aggressively expand the scope and accelerate the pace of future programs.

The 2019 program has the potential to significantly increase the existing gold-silver resource to a new resource target of +5 million gold-equivalent ounces (gold and silver) for the Lawyers Gold-Silver Project, located within the Toodoggone Mineral District on the eastern extent of the prolific Stikine Terrane, which also hosts the Golden Triangle region of British Columbia, Canada. It is expected that an expanded resource will remain open in width, at depth and along strike for further expansion with future drilling programs.

As a catalyst for growth, the resource expansion drilling will prioritize target areas that have generated significant results including 87 g/t gold and 2,407 g/t silver across 2.4 metres (DDHCC15-15) in the Cliff Creek Zone and 5.76 g/t gold and 128.65 g/t silver across 33.52 metres (18DRRC010) in the Dukes Ridge Zone. Extension drilling will target gold-silver mineralization from near surface to a depth of 250 metres, with the goal of connecting discrete mineralized zones along the +3km resource strike length, including long bulk-tonnage intersections that envelope high-grade areas of veining.

Seventy-five percent (75%) of the drilling will be dedicated to immediate resource expansion at Cliff Creek, Dukes Ridge, Phoenix and AGB areas that are contained within a 10km2 radiometric anomaly along the Lawyers Trend. Twenty-five percent (25%) of the drilling will test large radiometric anomalies with coincident high-grade gold-silver samples from throughout the +20km Lawyers Trend.

The 120km2 Lawyers Property remains under-explored with multiple (+6) new targets identified for drill testing that exhibit the same potential as the Cliff Creek, Dukes Ridge and Phoenix zones. The new targets will be drill tested for their potential to generate new discoveries across +500 metre areas. Two of the new targets are located within an area that is 100% owned by Benchmark.

The following pseudo long-section along the +3km 'heart' of the Lawyers Trend, depicts zones for immediate resource expansion. The map illustrates areas for step-out and deeper drilling that will provide continuity and connection between zones. 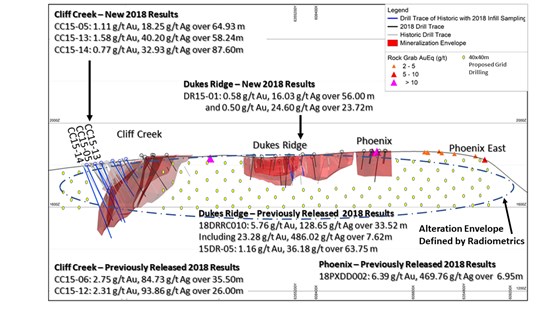 The technical content of this news release has been reviewed and approved by Rob L'Heureux, M.Sc., P.Geol., a qualified person as defined by National Instrument 43-101.

About Benchmark Metals Inc.
Benchmark is a Canadian mineral exploration company with its common shares listed for trading on the TSX Venture Exchange in Canada, the OTCQB Venture Market in the United States and the Tradegate Exchange in Europe. Benchmark is managed by proven resource sector professionals, who have a track record of advancing exploration projects from grassroots scenarios through to production.

To view the source version of this press release, please visit https://www.newsfilecorp.com/release/44352

Sign up to receive news releases by email for Benchmark Metals Inc. or all companies belonging to the Mining/Metals industry.