Vancouver, British Columbia--(Newsfile Corp. - January 25, 2023) - Go Metals Corp. (CSE: GOCO) ("Go Metals" and/or the "Company"), the owner and operator of the HSP Nickel-Copper-Cobalt Project ("HSP") on the Côte-Nord of Quebec, has successfully intersected nickel-copper mineralization on all targets as part of the first-ever drilling program.

Scott Sheldon CEO of Go Metals commented, "We have confirmed that the nickel mineralization sampled at surface continues to depth and remains open. We are at an early stage in the project's life cycle where limited testing has shown proof of concept in a new district with no historical drilling. A very small fraction of the total conductivity anomalies associated with nickel mineralization have been tested. We will apply our new knowledge to the second phase of drilling in this wide-open district."

Chamber South encountered alternating layers of moderately southwest dipping massive sulphide/oxides interlayered with anorthosite. Increasing levels of sulphides and base metals down hole in both 01 and 02 indicate potential to improve with depth. Drilling at Chamber South was the only pad to drill from the optimal direction intercepting surface structures and will be a priority drill target for phase 2.

Chamber North drilling intercepted anomalous disseminated nickel, copper, and cobalt mineralization over the vast majority of the holes. The best intercept was in HSP-22-05 with 73m of 0.046% Ni, 0.033% Cu and 0.009% Co. The large size of Chamber North (28 Ha or 70 acres) has comparable metal equivalents to porphyry grade mineralization. As disseminated sulphides of the concentrations seen in the drill holes are not typically able to create strong EM anomalies, further trench testing east-west across foliation will help to determine the location of any higher-grade sulphides and better test the massive sulphide layers seen at surface. 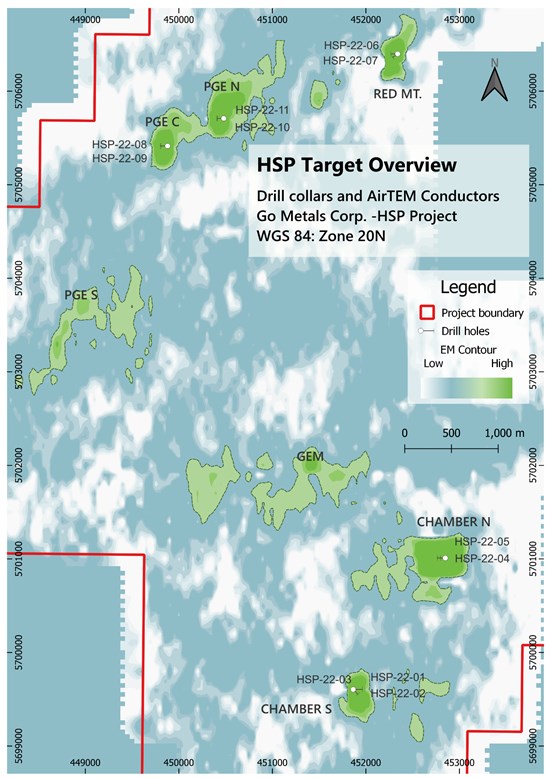 Red Mountain Zone - HSP-22-06,07
The drill targeting missed the surface mineralization based on the dip calculations obtained from drilling but identified a new high-grade nickel copper bearing sulphide structure at depth up to 1.3% Cu and 0.4% Ni. Given the high grades, large EM anomaly and relatively low sulphide content in the intervals, this target is highly prospective. Drilling intercepted narrow bands of massive sulphide pseudobreccia averaging 25cm wide. These holes contain the highest concentration of base metals in the sulphides from the drill program. The drill holes confirm the mineralization has similar apparent orientations as seen on the rest of the project, and therefore will be tested from the west drilling east in phase 2.

PGE Zone - HSP-22-08,09,10,11
The PGE target zone covers a large area over 3km along the northern contact and is dispersed over four targets including Central, North, South and Catalytic.

PGE Central showed some of the highest sulphide content with up to 45% sulphides. One highlight was the 10-metre massive sulphide breccia at 0.34% Ni, 0.31% Cu and 0.05% Co from 51 metres. Armed with a better understanding of the mineralized trend orientation, this target is a high priority for the phase 2 program.

PGE North failed to return significant grades as reported in the Company's news release dated January 9, 2023. This target remains prospective based on the knowledge that the drill was underneath the intended surface target. Follow up testing will be performed on this target after the PGE Central is explored in more detail, as both targets share similar geology.

PGE South remains untested as priority was given to the two northern PGE targets. Like PGE North, this target remains prospective and will be tested once more geological knowledge is derived from PGE Central.

PGE Catalytic is also an untested target between Central and North. Catalytic is a different as it covers a mafic dyke visible in total magnetic intensity with Cu, Ni and PGE mineralization along both it's east and west margins. The Dyke can be traced for 3.5 km.

GEM Zone - Untested
The interior anorthosite hosts the GEM zone that was not tested in the 2022 drill program. This zone is slated for mechanised surface trenching in 2023. Mineralization at GEM is disseminated but contained high nickel and copper grades (0.4% Ni 0.2% Cu - See news release dated August 30, 2021) which has potential to widen prospectivity to weaker EM anomalies within the anorthosite.

Sampling, Assays and QAQC
Sample selection is based on visual occurrences of sulphides. Selected intervals were half-cut with a diamond rock saw in IOS facility in Saguenay and the consistent half was sent to ALS-Minerals laboratories in Val D'Or. Samples were crushed at 70% -2mm, split to 500 grams, and pulverized at 90% -70 um (Method Prep-31). Base metal assays were made by ICP-AES after aqua-regia digestion (method ME-ICP-61). Gold, platinum, and palladium were assayed by fire-assay on lead bead on 30 grams load, with ICP-MS finishing (method PGM-ICP23). ALS is an ISO-17025 accredited facility. Quality control procedure included the insertion prior to shipment of barren quartz material as sample blanks (7.3% of sample) as well as certified reference material (OREAS-86, PTC-1a, WMS-1a, 13.8% of samples).

Samples were analysed using four acid digestion and ICP-AES finish. PGE and Au values are determined through fire assay PGM-ICP23. Rigorous QAQC protocols were used including standards and blanks at the start and end of lab sample sheets as well as with insertion at regular intervals.

Qualified Person
Hugues Longuépée, P.Geo., is the qualified person ("QP") for the Company as defined in the National Instrument 43-101 and has reviewed the technical information presented within this news release. The QP for the Company has not verified the historic sample analytical data disclosed within this release.

About Go Metals
Go Metals targets Canadian battery metal projects to help power a sustainable future. The Company's flagship is a nickel-copper sulphide project 130 kilometres north of Havre-Saint Pierre, Quebec in the Nitassinan of the Innu of Ekuanitshit. The Company recently completed a $2.1M financing for the phase two program at the Quebec HSP project in 2023.

The Canadian Securities Exchange (operated by CNSX Markets Inc.) has neither approved nor disapproved of the contents of this news release.

To view the source version of this press release, please visit https://www.newsfilecorp.com/release/152381

Sign up to receive news releases by email for Go Metals Corp. or all companies belonging to the Mining and Metals, Energy Metals industries.