North Macedonia, Bogdanci--(Newsfile Corp. - November 18, 2022) - The team behind the Web3 Battle For Giostone MOBA game has launched their Pre-Alpha stage and several tournaments have already been hosted within it. With this development, the game enters its next stage as per the official roadmap. 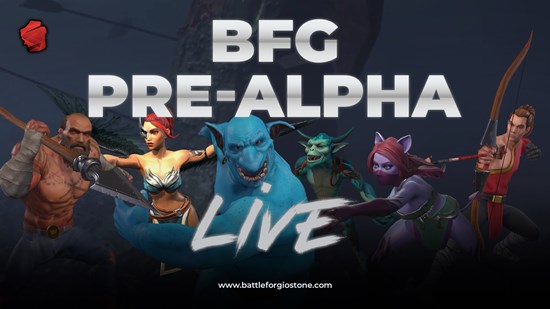 Battle For Giostone players can fight against each other, think of strategies to destroy the enemy base, and receive rewards in return.

Battle For Giostone is a MOBA game, which stands for 'Multiplayer Online Battle Arena'. The primary objective of the game is to destroy the main enemy structure. If neither team can accomplish this in less than 25 minutes, they get summoned by a dragon called 'Gio' to fight in a match with 'sudden death' rules. The winning team receives rewards that can be used to forge Heroes, which would be in the form of digital collectibles, or converted to crypto tokens.

Moreover, although the gameplay may sound simplistic, mastering the game can take several years as MOBAs are among the most competitive games in the industry. In addition, every 'Hero' has a class with specific attributes based on strength, intelligence, or agility. Players can pick the abilities they want when forging a Hero and influence the base stats according to their own individual preferences. Lastly, having a choice of 6 Hero Classes and 72 abilities leads to more than 3.5 million different combinations.

As previously mentioned, the game's primary purpose is to destroy the opposing team's base. Players would therefore require teamwork, effective strategy, and extensive knowledge about the game. Furthermore, the players must defeat enemy heroes, creeps, and jungle monsters while also destroying the enemy towers before they get to the base. Also, killing the dragon, Gio, results in a Giostone being dropped. Players can then pick up this item which grants a power-up to their entire team but they also become a key target for the opposing team.

Finding the perfect balance of individual skill and teamwork is crucial, and teams that achieve this will emerge victorious and earn rewards. Players can also play 'Ranked' matches to climb the leaderboards, in addition to a 'Story' mode to immerse themselves into the lore, and finally 'Tournaments'.

Battle For Giostone decided to make a game first and everything else second, as aforementioned. The idea behind this was to make a viable project which could deliver on both its 'hype' and potential' rather than risk under delivering later on.

In October 2022, Battle For Giostone successfully completed their IDO and raised $400.000 in token sales and twice more in liquidity. Although the game is still in the Pre-Alpha stage, multiple tournaments have already been hosted to promote the project, gain valuable feedback from the community, and build publicly. Additionally, every tournament was focused on improving gameplay, design and making the entire experience smoother and more effective.

Apart from the $BFG debut and hosting tournaments, the Battle For Giostone team has also been active in many AMA sessions on Twitter and Discord with prominent influencers, communities, projects, and leaders in the space.

Regarding future goals, the team plans to introduce more esports events, further polish the game, and advance into a Closed Alpha version. Afterward, they will start developing the game's mobile version, through which the team will strive to onboard millions of users.

Battle For Giostone is the first Web3 MOBA in the world. The project aims to change how people view gaming and reward players for their time, effort, and skills. Essentially, the game strives to boost players' interaction with digital assets and encourage trading them on a marketplace.

There are also multiple ways to get rewards. For starters, playing the game rewards users with tokens that allow them to forge new heroes and sell them on the marketplace. Then, there are tournaments and esports events where teams can showcase their skills. Revenue Sharing is another way to earn rewards by sharing the in-game profits with the team. Finally, creating content allows individuals to monetize their opinion, personality, or followers in conjunction with the game.

In a nutshell, Battle For Giostone aims to show the world that esports is the formula for a successful GameFi project. Gamers, investors, spectators, and sponsors can hence blend in a perfect mix within massive tournaments, leagues, and, most importantly, a fun and rewarding game.

Disclaimer: The project is under heavy development. Everything mentioned is subject to change. Readers should not consider this as financial advice.

To view the source version of this press release, please visit https://www.newsfilecorp.com/release/144492

Sign up to receive news releases by email for Blockman.Pro or all companies belonging to the Blockchain, Technology, Advertising industries.