"During October, Sphere 3D made enormous strides in positioning the Company to fully capitalize on the recovery and growth of the Bitcoin market. Most notably, the restructuring of the BitFuFu contract was a significant step forward for Sphere 3D. We now have the ability to explore the latest miner technology and the financial flexibility to capitalize on opportunities to generate value for our shareholders.

"We continue to work with our partners to install the thousands of miners Sphere 3D has landed in recent months and are working with energy providers and contractors to energize them. In the coming months, as more than 17,000 miners come online, Sphere 3D's production will increase dramatically."

Our discussions with BitFuFu to renegotiate our September 21, 2021, contract were successful. Under a new agreement reached in October, BitFuFu will apply the remaining portion of Sphere 3D's deposit toward the delivery of approximately 1.2 EH/s of S19j Pros during 2022. The new agreement relieves Sphere 3D from the obligation to purchase 3.9 EH/s of capacity at above-market rates. It also eliminates substantial penalties due to BitFuFu from Sphere 3D because of the contract changes.

Sphere 3D continues to work with hosting partners to activate 4,026 miners landed in previous months. Their deployment will increase the Company's production capacity by more than 400 percent compared to October 2022 production capacity levels. Post-activation production capacity is expected to total approximately 500 PH/s. The miners were delivered to Compute North's Grandbury, Texas facility. As a result of Compute North's bankruptcy, Sphere 3D is now working directly with the new owner and operator of the facility to get the Company's miners energized and producing as soon as possible.

Daily production volume dropped about one percent compared to September 2022, driven by two upward difficulty adjustments; the first on October 10, 2022, jumping 13.55%, the largest retarget of 2022, followed by a second upward retarget on October 23, 2022, of 3.44%, bringing mining difficulty to a new all-time high.

The Company continues to employ a HODL strategy for the majority of its holdings. The Company used approximately 4.1 Bitcoin during the month to fund working capital.

"In October, we took meaningful steps toward positioning the Company for long-term success. This includes restructuring certain agreements with providers and advisors, such as the BitFuFu agreement, and eliminating financial obligations that are not core to our mining operations. We will continue to maximize the value the Company can generate for investors going forward by reducing expenses not core to the Company's strategies.

"We continue to maximize the efficiency of our operation, clean up our balance sheet, and stabilize earnings in preparation for the full deployment of our mining fleet. We are nearing the completion of several strategic initiatives that have been underway, and the tireless work of our team is starting to show meaningful results.

"As a fellow shareholder, I look forward to advancing these initiatives in the fourth quarter. Thank you for your continued support," said Patricia Trompeter, CEO of Sphere 3D. 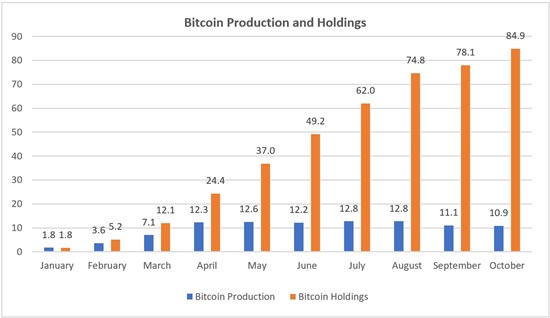 Sphere 3D's Annual General Meeting is scheduled to be held virtually on December 20, 2022. Meeting materials will be available for review on November 18, 2022, at docs.tsxtrust.com/2040 and under the Company's SEDAR and EDGAR profile at www.sedar.com and www.sec.gov, respectively, and sent to Shareholders of record as of November 8, 2022, on or about November 18, 2022.

Sphere 3D Corp. (NASDAQ: ANY) is a net carbon-neutral cryptocurrency miner with decades of proven enterprise data-services expertise. The Company is rapidly growing its industrial-scale mining operation through the capital-efficient procurement of next-generation mining equipment and partnering with best-in-class data center operators. Sphere 3D is dedicated to growing shareholder value while honoring its commitment to strict environmental, social, and governance standards. For more information about the Company, please visit Sphere3D.com.

This communication contains forward-looking statements within the meaning of Section 27A of the Securities Act, and Section 21E of the Securities Exchange Act of 1934, as amended. Forward-looking statements generally relate to future events, including the timing of the proposed transaction and other information related to the proposed transaction. In some cases, you can identify forward-looking statements because they contain words such as "may," "will," "should," "expects," "plans," "anticipates," "could," "intends," "target," "projects," "contemplates," "believes," "estimates," "predicts," "potential" or "continue" or the negative of these words or other similar terms or expressions. Expectations and beliefs regarding matters discussed herein may not materialize, and actual results in future periods are subject to risks and uncertainties that could cause actual results to differ materially from those projected. The forward-looking statements contained in this communication are also subject to other risks and uncertainties, including those more fully described in filings with the SEC, including Sphere 3D's reports filed on Form 20-F and Form 6-K and in other filings made by Sphere 3D with the SEC from time to time and available at www.sec.gov. These forward-looking statements are based on current expectations, which are subject to change.

To view the source version of this press release, please visit https://www.newsfilecorp.com/release/143761

Sign up to receive news releases by email for Sphere 3D Corporation or all companies belonging to the Technology, Computer Software industries.