PLA 1597 was identified as prospective for lithium pegmatite potential by the Company's Project partner LRH and its exploration consultants Aurum Exploration Services ("Aurum") following detailed desktop studies which outlined two proximal areas of spodumene-bearing pegmatite reported by previous operators in the mid 1970s as part of their exploration programmes. The lithium pegmatite boulder trains at Knockeen and Carriglead are separated by a north-south valley and form an initial area of interest covering approximately 2km east-west and 1km north-south. A historical exploration map and report also described a trench excavated at Knockeen as having uncovered a 1.8m wide bedrock spodumene-bearing pegmatite vein, however no detailed laboratory assays or geological maps of the trench were reported at that time.

LRH completed an initial one day reconnaissance site visit to the Knockeen - Carriglead prospects with Aurum geologists visually confirming the presence of spodumene in float and collecting six samples which were submitted for analysis to ALS Laboratories, Loughrea, Co. Galway, Ireland, and returned values between 0.70% Li2O to 2.95% Li2O (Table 1). 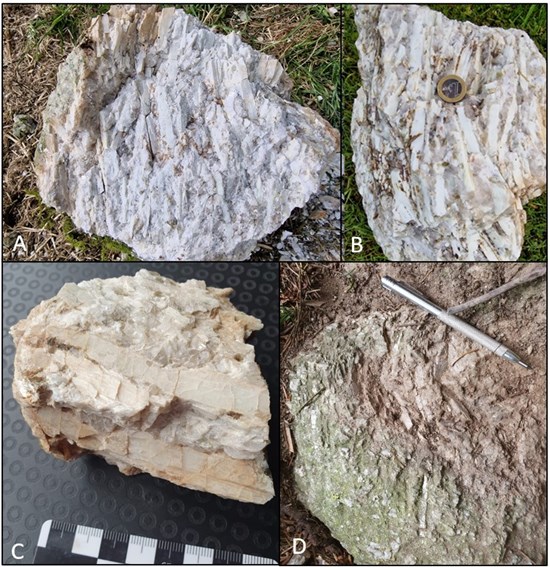 Further detailed exploration work on PLA 1597 is expected to commence in late October 2022 in the form of prospecting, mapping and deep overburden sampling surveys which are aimed at defining targets for drilling.

The Leinster Property, located in the counties of Wicklow, Dublin and Wexford, is focused on the exploration for lithium mineralisation within spodumene-bearing pegmatites. The Property consists of fifteen prospecting licences, termed 'the North-west Leinster Block', which cover a total area of approximately 477km2, and the PLA 1597 comprising 48.32km2, in County Wexford.

The Property lies along a 135km long regional structural trend of known lithium-bearing pegmatites, along the south-eastern margin of the Leinster Massif and centred on the Aclare and Moylisha occurrences which were discovered during 1960s and 1970s and are currently being explored under the Ganfeng - International Lithium joint venture.

In addition to the work on PLA 1597, five target areas on the North Leinster Block (Fig 2) will be followed up. Exploration on these areas to date has identified lithium-rich aplite and spodumene pegmatite float boulders within broader zones of Geological Survey of Ireland lithium anomalism in drainage stream sediment samples. This work has been previously reported by LRH and a summary of the prospecting is presented below:

As part of an ongoing workflow, the Company continues to identify, fully assess and apply for new prospective areas for spodumene-pegmatite exploration opportunities along the district-scale Irish lithium pegmatite belt. 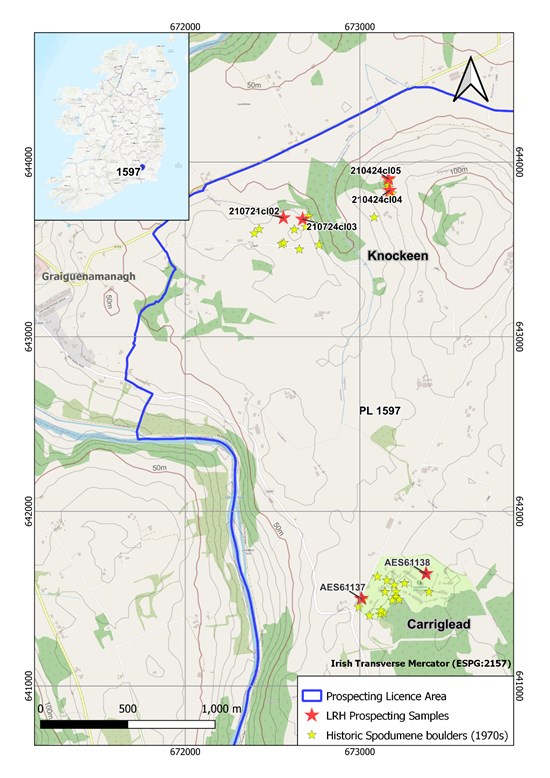 "The initial prospecting results confirming the presence of high-grade lithium in spodumene-pegmatites, along with the rediscovery of decades-old information pertaining to spodumene boulder trains is an exciting find and an important view into this area's potential," stated Michael Murphy, President and CEO of GBML. "GBML will now conduct a deep overburden sampling program in the Knockeen and Carriglead zones to help determine the best possible position for a drilling rig to get started."

The Property was selected by the Company due to significantly higher grades than nearby Ganfeng/ILC Avalonia project in stream sediments, with similar grades in soil samples. Stream sediment assays are predominantly in the 125-1000ppm range vs 60-120ppm range for Ganfeng/ILC assays. The presence of visible spodumene is noted in several areas, along with coarse spodumene crystals in one prospective area that appears to be at least a few hundred metres long. Ireland remains a geopolitically stable area and the weather in Leinster is amenable year-round for exploration and development.

Please see the Company's NW Leinster Project Overview for additional program details, in addition to the latest version of the Company's Investor Presentation available for download from the GBML website (www.gbml.ca).

All scientific and technical information in this announcement has been prepared under the supervision of EuroGeol Vaughan Williams, M.Sc., P.Geo. (a Principal of Aurum Exploration Services currently providing exploration services to GBML and to LRH), and a "qualified person" within the meaning of National Instrument 43-101. Vaughan Williams is also company secretary of LRH.

GBML is a mineral exploration company with a focus on metals that make up and support the rapid evolution to battery power. GBML's common shares are listed on the TSX Venture Exchange and Frankfurt Stock Exchange and quoted on the OTCQB. GBML currently has five projects: (1) an option to acquire up to a 90% in the North-West Leinster Lithium Property in Ireland; (2) a 100% interest in the Lithium King Property in Utah; (3) an option to acquire up to a 100% interest in the Lapoile Lithium Project in Newfoundland; (4) an option to lease the Sawyer Camp prospective nickel-copper project in Michigan; and (5) a 55% stake in Peru-based Lara copper property, which has over 10,000 metres of drilling. As previously disclosed, Minsur S.A., a Peruvian mining company, entered into an option agreement (the "Lara Property Option Agreement") with GBML and Lara Exploration Ltd. to acquire the Lara copper property for staged payments of USD$5.75 million. The Lara Property Option Agreement also provides for a 0.75% net smelter royalty in favour of GBML.

To view the source version of this press release, please visit https://www.newsfilecorp.com/release/141021

Sign up to receive news releases by email for Global Battery Metals Ltd or all companies belonging to the Mining and Metals industry.