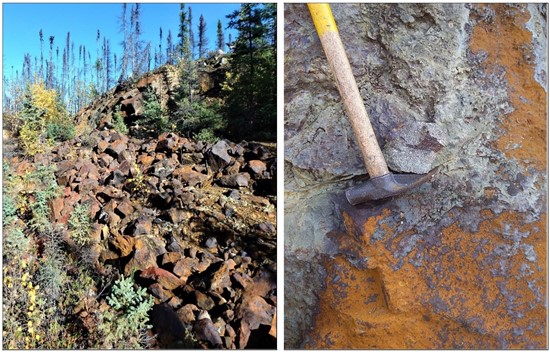 To view an enhanced version of this graphic, please visit:
https://images.newsfilecorp.com/files/3046/139547_alxfigure1.jpg 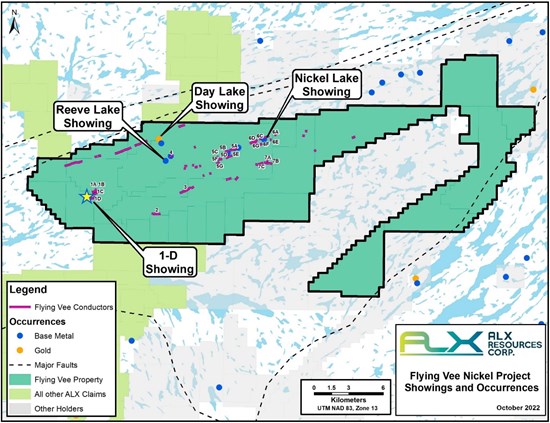 A total of 32 rock grab samples were collected from Flying Vee for assay and whole rock analyses of prospective mafic rock units and were submitted on a rush basis to the Saskatchewan Research Council's Geoanalytical Laboratories. Results will be released upon their receipt and interpretation.

The discovery of pyrrhotite mineralization in subcrop and boulders as well as favourable mafic host rocks along the Conductor 2 trend upgrades the potential of this conductor and indicates further investigation is warranted.

Favourable mafic host rocks were noted along the land portions of Conductor 3 but no direct explanation for the conductor was observed. It was noted that a significant portion of middle part of Conductor 3 trends under a lake. Mafic rock units, potentially noritic, were observed and indicate potential for nickel sulphide mineralization at depth. Further investigation of Conductor 3 trend is warranted.

Samples were collected from historical trenches on the 6-B and 6-D VTEM conductor trends (matching the historical Nickel Lake conductor trend) to provide a modern context for the nature of the mineralization found by previous explorers that occurs along this long conductive trend.

In order to efficiently focus future surface exploration, further investigation of the EM-associated and magnetic anomalies detected by the 2022 VTEM survey is recommended, consisting of the following:

About the Flying Vee Project

Two main periods of historical exploration by several exploration companies occurred at Flying Vee from 1956 to 1988 and from 2007 to 2009, consisting of prospecting and mapping, trenching, airborne and ground geophysical surveys, and diamond drilling. Several trenches were completed between 1957 and 1962 in the eastern part of the Reeve Lake Showing area south of Nickel Lake that outlined norite-hosted nickel-copper mineralization at surface. Thirteen shallow diamond drillholes were completed in 1964 with the best result in Drillhole #3, which returned up to 0.89% nickel and 0.32% copper over 3.66 metres from 10.67 to 14.33 metres.

In 1968, a gossan zone was discovered at Day Lake within the current Project area, which hosted disseminated pyrite and arsenopyrite mineralization that returned 0.14 oz/ton (4.80 grams/tonne) gold over 1.5 metres, including a selected grab sample assaying 0.81 ounces/ton (27.77 grams/tonne) gold. Diamond drilling was carried out in the Day Lake area in 1986, intersecting anomalous gold and silver mineralization.

Airborne geophysical surveys completed by Strongbow Exploration Inc. ("Strongbow") in 2007 detected a favorable conductive zone with a coincident magnetic anomaly at Nickel Lake. In 2008, Strongbow tested the Nickel Lake anomaly with drillhole NL08-001, intersecting semi-massive pyrrhotite along with chalcopyrite and rare pentlandite that returned 1.89% nickel, 0.96% copper, and 0.11% cobalt over a 0.8 metre interval from 80.15 to 80.95 metres.

The technical information in this news release has been reviewed and approved by Robert Campbell, P.Geo., a consultant to ALX, who is a Qualified Person in accordance with the Canadian regulatory requirements set out in NI 43-101. Management cautions that some of the technical information described in this news release is historical in nature and is taken directly from assessment work filings published by the Government of Saskatchewan. However, this historical information is deemed credible and was produced by professional geologists in the years discussed. Management further cautions that historical results or discoveries on adjacent or nearby mineral properties are not necessarily indicative of the results that may be achieved on ALX's mineral properties.

ALX's mandate is to provide shareholders with multiple opportunities for discovery by exploring a portfolio of prospective mineral properties, which include uranium, lithium, nickel-copper-cobalt and gold projects. The Company uses the latest exploration technologies and holds interests in over 220,000 hectares of prospective lands in Saskatchewan, a stable Canadian jurisdiction that hosts the highest-grade uranium mines in the world, a producing gold mine, and production from base metals mines, both current and historical.

Statements in this document which are not purely historical are forward-looking statements, including any statements regarding beliefs, plans, expectations or intentions regarding the future. Forward-looking statements in this news release include statements regarding ALX's initial observations from 2022 geophysical and geological exploration programs at the Flying Vee Nickel Project, and ALX's ability to continue to expend funds at that project. It is important to note that the Company's actual business outcomes and exploration results could differ materially from those in such forward-looking statements. Risks and uncertainties include that ALX may not be able to fully finance exploration on our exploration projects, including drilling; our initial findings at our exploration projects may prove to be unworthy of further expenditures; commodity prices may not support further exploration expenditures; exploration programs may be delayed or changed due to any delays experienced in consultation and engagement activities with First Nations, Metis communities and other stakeholders in the region; and economic, competitive, governmental, societal, public health, weather-related, environmental and technological factors may affect the Company's operations, markets, products and share price. Even if we explore and develop our projects, and even if uranium, lithium, nickel, copper, gold or other metals or minerals are discovered in quantity, ALX's projects may not be commercially viable. Additional risk factors are discussed in the Company's Management Discussion and Analysis for the Six Months Ended June 30, 2022, which is available under the Company's SEDAR profile at www.sedar.com. Except as required by law, we will not update these forward-looking statement risk factors.

To view the source version of this press release, please visit https://www.newsfilecorp.com/release/139547