Vancouver, British Columbia--(Newsfile Corp. - August 17, 2022) - Prospector Metals Corp. (TSXV: PPP) (OTCQB: ETHOF) (FSE: 1ET) ("Prospector" or the "Company") is pleased to announce that it has executed a property option agreement with Newfoundland Discovery Corp. ("NEWD") in which NEWD may earn a 50% interest in the Schefferville Gold Project project in return for staged share payments to Prospector and $4M of work commitments by December 31, 2025, including $1.3M by the end of 2022, and a 100% interest by issuing 19.9% of its shares to Prospector and completing total of $7.5M of work commitments by the end of 2026.

Alex Heath, President & CEO of Prospector, stated: "I am pleased to be announcing this property option agreement with NEWD that will see our Schefferville Gold Project drill tested this year. The Schefferville Gold Project covers a 20km by 70km region with numerous high-grade gold in rock samples and over fifty surface gold prospects. We look forward to working with NEWD and advancing this truly district scale opportunity."

Phase 2 is anticipated to start in September 2022 and comprises approximately 3,500m of diamond drilling testing multiple high-priority targets delineated in the Phase 1 exploration program. Operations will be based out of the new exploration camp.

NEWD may earn up to a 100% interest in the Schefferville Gold property, with two option milestones, in return for the following work commitments and share payments to Prospector: 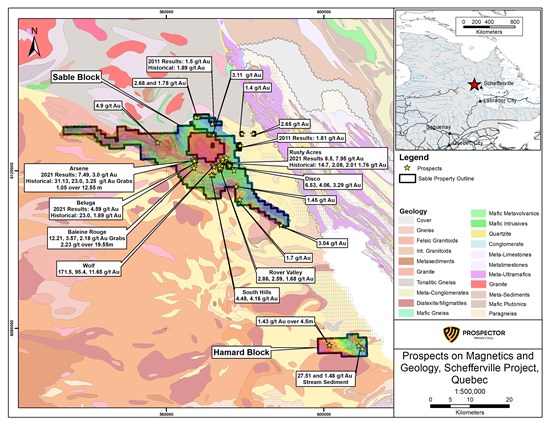 Figure 1. Prospects on the Sable Block; Magnetics and Geology within the Schefferville Project

1 Historical assay values have not been independently verified by the Company and a potential investor should not place undue reliance on historical results when making an investment decision, nor should they be used as the sole criterion for making investment decisions. There is no assurance that the Company can reproduce such results or that the historical results described therein will be realized.

2 "Best surface samples" are grab / select samples and not necessarily representative of mineralization hosted on the property.

All channel and rock samples were sent to MSA Labs and ALS Canada Ltd. (ALS) in Val d'Or, Quebec for preparation and analysis. MSA and ALS meet all requirements of International Standards ISO/IEC 17025:2005 and ISO 9001:2015 for analytical procedures. At ALS, samples are being analysed using Fire Assay and AAS, 30g method (Au-AA-25) and by a 48-element four acid digest ICP-MS analysis (ME-ICP61). At MSA, samples are being analysed by Au Chrysos PhotonAssayTM. In addition, MSA and ALS Laboratories follow quality assurance / quality control (QA/QC) protocols.

This press release contains certain "forward-looking statements" within the meaning of Canadian securities legislation, including, but not limited to, statements regarding the Company's plans with respect to the Company's projects and the timing related thereto, including, but not limited to, the earning-in of NEWD in the Schefferville Gold Project and the plans and timing of the Phase 2 Exploration Program at the Schefferville Gold Project, the merits of the Company's projects, the Company's objectives, plans and strategies, and other project opportunities. Although the Company believes that such statements are reasonable, it can give no assurance that such expectations will prove to be correct. Forward-looking statements are statements that are not historical facts; they are generally, but not always, identified by the words "expects," "plans," "anticipates," "believes," "intends," "estimates," "projects," "aims," "potential," "goal," "objective," "strategy," "prospective," and similar expressions, or that events or conditions "will," "would," "may," "can," "could" or "should" occur, or are those statements, which, by their nature, refer to future events. The Company cautions that forward-looking statements are based on the beliefs, estimates and opinions of the Company's management on the date the statements are made and they involve a number of risks and uncertainties. Consequently, there can be no assurances that such statements will prove to be accurate and actual results and future events could differ materially from those anticipated in such statements. Except to the extent required by applicable securities laws and the policies of the TSX Venture Exchange, the Company undertakes no obligation to update these forward-looking statements if management's beliefs, estimates or opinions, or other factors, should change. Factors that could cause future results to differ materially from those anticipated in these forward-looking statements include the risk of accidents and other risks associated with mineral exploration operations, the risk that the Company will encounter unanticipated geological factors, or the possibility that the Company may not be able to secure permitting and other agency or governmental clearances, necessary to carry out the Company's exploration plans, risks and uncertainties related to the COVID-19 pandemic and the risk of political uncertainties and regulatory or legal changes in the jurisdictions where the Company carries on its business that might interfere with the Company's business and prospects. The reader is urged to refer to the Company's reports, publicly available through the Canadian Securities Administrators' System for Electronic Document Analysis and Retrieval (SEDAR) at www.sedar.com for a more complete discussion of such risk factors and their potential effects

To view the source version of this press release, please visit https://www.newsfilecorp.com/release/134061