Global Industrial Associates' Names to Appear on the Hood of the No. 21 Chevrolet Camaro SS 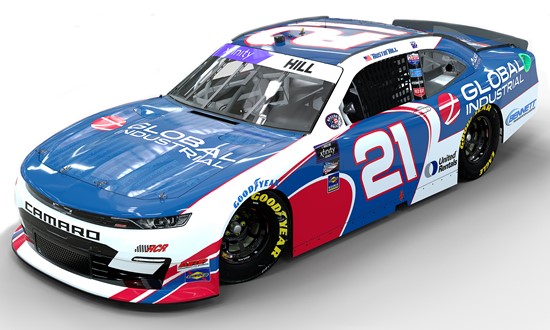 To view an enhanced version of this graphic, please visit:
https://orders.newsfilecorp.com/files/8832/124440_img1.jpg

"It's really impactful to take a step back and recognize our associates who are the driving force behind Global Industrial's success," said Barry Litwin, Chief Executive Officer at Global Industrial. "Global Industrial wouldn't be where it is today without our associates' commitment to our customers, hard work, and belief in our mission to deliver an exceptional customer experience. Our associates are the engine that allows us to continue to grow and succeed and we are very proud to partner with Austin and RCR to recognize their achievements."

"RCR and Austin Hill have been invaluable partners in our NASCAR marketing journey, supporting both race day and off-track initiatives," said Klaus Werner, Senior Vice President and Chief Marketing Officer at Global Industrial. "Having our associates take over the racecar hood is an exciting way to say thank you for their ongoing efforts and their dedication during the pandemic."

"I am extremely honored to carry the names of the dedicated and hard-working Global Industrial associates on the No. 21 Chevrolet Camaro at Texas Motor Speedway," said Austin Hill. "It's special to be part of an organization that values its employees and recognizes the critical role they play. I've had the privilege of meeting many of these associates and I am proud to represent the Global Industrial team on and off the track."

Global Industrial first broke onto the racing scene when they joined the RCR team sponsoring Sheldon Creed for the NASCAR Xfinity Series Championship Race at Phoenix Raceway in November 2021. Creed drove the No. 78 Global Industrial Chevrolet Camaro. Since then, Global Industrial has expanded its partnership with RCR and is now a recurring sponsor of the No. 21 car, with the main sponsorship rights for a number of races throughout the season, including May 21st at Texas Motor Speedway.

"We couldn't be more excited for the upcoming race in Texas. We truly value our partnership with Global Industrial and are honored for our car to feature the names of their associates," said Richard Childress, Chairman and CEO Richard Childress Racing. "Employee recognition embodies the values and team approach of RCR, and the racing community as a whole. As a community we are strong, resilient, hard-working and driven - all of which will be represented on the hood of the No. 21 car this weekend."

On Friday, May 20th, Global Industrial will host an employee appreciation event at its DeSoto, TX distribution center. The event will include the official unveiling of the RCR Chevrolet No. 21 hood with every associate name, a meet and greet with Austin Hill, and a special race-themed raffle.

About Richard Childress Racing:
Richard Childress Racing (rcrracing.com) is a renowned, performance-driven racing, marketing and manufacturing organization. Incorporated in 1969, RCR has celebrated over 50 years of racing and earned more than 200 victories and 16 championships, including six in the NASCAR Cup Series with the legendary Dale Earnhardt. RCR was the first organization to win championships in the NASCAR Cup Series, NASCAR Xfinity Series and NASCAR Truck Series and is a three-time winner of the Daytona 500 (1998, 2007, 2018). Its 2022 NASCAR Cup Series lineup includes two-time NASCAR champion, 2017 Coca-Cola 600 winner and 2018 Daytona 500 champion Austin Dillon (No. 3 Chevrolet), along with two-time NASCAR Xfinity Series champion Tyler Reddick (No. 8 Chevrolet). RCR fields a full-time NASCAR Xfinity Series program with Sheldon Creed (No. 2 Chevrolet) and Austin Hill (No. 21 Chevrolet).

To view the source version of this press release, please visit https://www.newsfilecorp.com/release/124440

Sign up to receive news releases by email for Global Industrial Company or all companies belonging to the Construction/Building, Retail, Transportation/Trucking/Railroads industries.