Vancouver, British Columbia--(Newsfile Corp. - September 26, 2019) - OSPREY GOLD DEVELOPMENT LTD. (TSXV: OS) (OTCQB: OSSPF) (the "Company" or "Osprey") is pleased to announce it has initiated an additional high-resolution unmanned aerial vehicle ("UAV") magnetic geophysical survey at the Goldenville Gold Project ("Goldenville") in Nova Scotia. This additional survey will cover the western portion of the project and encompass areas of known resources, as well as extend beyond the resource envelope to the east.

Osprey President Cooper Quinn stated, "The initial survey was performed on the western portion of the of the Goldenville property, and covered the areas that we had selected to focus on in our upcoming drill program. The survey detail exceeded our expectations and upon reviewing this initial survey, the Company decided to expand the geophysical program to cover the eastern extent of the main anticline structure on our claims in an effort to identify additional drill targets. We control approximately 1 kilometer of anticline strike length beyond our successful 2017 drilling; this geophysical survey will help us refine our structural understanding of both limbs in this direction. We're excited to see what targets can be generated in this prospective area outside the existing resource."

The detailed UAV survey provides important vectoring information to aid in the prioritization and delineation of drill targets for potential gold discoveries outside the area of known mineralization, and in areas obscured by glacial overburden and limited prior exploration. The identification of geophysical magnetic highs provide important indicators for drill target delineation.

Results from the first survey show several high quality targets; a magnetic high on the south limb that may correlate with zones of disseminated mineralization in argillite first drilled in 2017, another magnetic high on to the north east of the existing resource along a known important structural trend, and a magnetic high that aids in defining the orientation and structures in the Mitchell Lake Zone, 3.5 kilometers to the east of the existing resource where Osprey drilled three holes in 2017 that all showed disseminated mineralization in argillites.

Targets generated in part from this additional survey will be incorporated into upcoming exploration and drill programs this fall, which will be announced as they commence.

The eastern area of the claim block has received less exploration, but is a highly prospective zone. The Company drilled several holes in the Bluenose area on the north limb in 2017, and all holes intersected significant gold mineralization. The south limb remains very underexplored, with only limited drilling to date. This survey will help map potential extensions to mineralization on the north limb, increase structural understanding, and identify areas of potential mineralization. 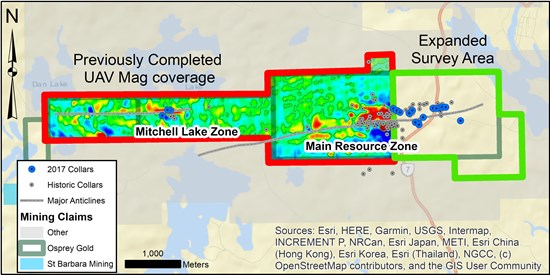 The Company is currently finalizing details of an upcoming drill campaign at Goldenville, utilizing the recent high resolution geophysics, and all past exploration data. Details of this program will be announced when it commences.

A magnetic geophysical survey has also been conducted at the Caribou Gold Project ("Caribou"), and the Company is awaiting final deliverables which will be analyzed and drill targets announced when complete. Caribou is located less than 10 kilometers by road from St Barbara's Touqouy Mill.

Osprey's most advanced project, Goldenville, was Nova Scotia's largest historic gold producer, and is located approximately 3 km by paved highway from the town of Sherbrooke, NS. Goldenville hosts a current NI 43-101 Inferred Resource of 2,800,000 tonnes at 3.20 g/t gold for 288,000 ounces of gold (2,800,000 tonnes at 4.96 g/t gold for 447,000 ounces of gold uncapped). The Mitchell Lake Zone, approximately 3.5 km west of the resource area, is identified by the Company as a priority exploration area for additional work and follow-up drilling in 2019, because of the broader gold intercepts and lack of historic drilling that left large sections of untested potential.

Osprey is focused on exploring five historically producing gold properties in Nova Scotia, Canada. Osprey has the option to earn 100% (subject to certain royalties) in all five properties.

The exploration program on the Company's properties is performed under the supervision of Perry MacKinnon, P.Geo, Vice-President of Exploration of Osprey and a 'Qualified Person' under NI 43-101. Mr. MacKinnon has reviewed and approved the technical content of this release.

Additional information regarding Osprey and the Goldenville and Caribou properties is available under the Company's profile at www.sedar.com and at www.ospreygold.com.

For further information please contact Osprey at (778)986-8192 or cooper@ospreygold.com

All statements in this press release, other than statements of historical fact, are "forward-looking information" with respect to Osprey within the meaning of applicable securities laws. Osprey provides forward-looking statements for the purpose of conveying information about current expectations and plans relating to the future and readers are cautioned that such statements may not be appropriate for other purposes. By its nature, this information is subject to inherent risks and uncertainties that may be general or specific and which give rise to the possibility that expectations, forecasts, predictions, projections or conclusions will not prove to be accurate, that assumptions may not be correct and that objectives, strategic goals and priorities will not be achieved. These risks and uncertainties include but are not limited to exploration findings, results and recommendations, as well as those risks and uncertainties identified and reported in Osprey's public filings under Osprey's SEDAR profile at www.sedar.com. Although Osprey has attempted to identify important factors that could cause actual actions, events or results to differ materially from those described in forward-looking information, there may be other factors that cause actions, events or results not to be as anticipated, estimated or intended. There can be no assurance that such information will prove to be accurate as actual results and future events could differ materially from those anticipated in such statements. Osprey disclaims any intention or obligation to update or revise any forward-looking information, whether as a result of new information, future events or otherwise unless required by law.

To view the source version of this press release, please visit https://www.newsfilecorp.com/release/48188