Sudbury, Ontario--(Newsfile Corp. - June 5, 2019) - Transition Metals Corp (TSXV: XTM) ("Transition", "the Company") is pleased to announce that it has resumed exploration drilling at its Highland Gold project in Cape Breton, Nova Scotia. In January of this year, the Company reported a 9.14 metre intersection grading 23.22 grams per tonne gold (g/t Au) from a program of percussion Rotary Air Blast (RAB) drilling (see Transition news release dated January 14, 2019). In the fall of 2018, the Company initiated an approximate 1,000 metre program of percussion drilling to test a cluster of high-grade showings within a roughly 5 square kilometer portion of the property highlighted by till sampling. This program however was not completed due to the onset of winter conditions. The Company plans to continue the program this spring by completing an additional 15-20 holes totaling approximately 1,000 metres using an air powered Reverse Circulation (RC) drill. Additional work planned during the summer includes investigating other portions of its more than 100 square kilometer land position in the region.

Transition CEO Scott McLean commented, "The Highland property has returned some of the highest grades of gold the Company has drilled to date and we are excited to resume our exploration efforts on the Property to further evaluate the more than 30 known high-grade showings. In addition, the extensive stream sediment and till gold anomalies identified by our work supports the presence of large-scale mineralized systems with gold interpreted to have been sourced from multiple structures. The work planned for this summer will help us better understand the scale and economic potential of these systems." 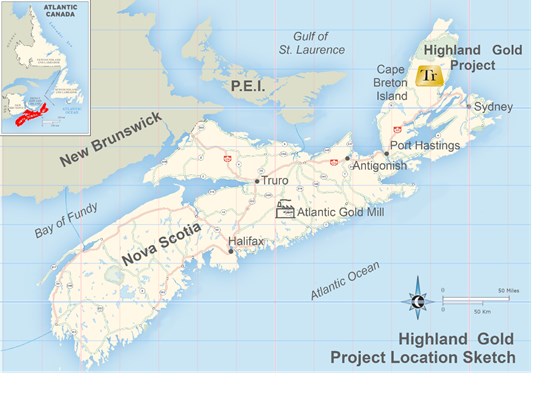 The technical elements of this press release have been approved by Mr. Greg Collins, P.Geo. (APGO, APGNS), a Qualified Person under National Instrument 43-101. Historical assay results cited above have not been verified by the Qualified Person.

Except for statements of historical fact contained herein, the information in this news release constitutes "forward-looking information" within the meaning of Canadian securities law. Such forward-looking information may be identified by words such as "plans", "proposes", "estimates", "intends", "expects", "believes", "may", "will" and include without limitation, statements regarding estimated capital and operating costs, expected production timeline, benefits of updated development plans, foreign exchange assumptions and regulatory approvals. There can be no assurance that such statements will prove to be accurate; actual results and future events could differ materially from such statements. Factors that could cause actual results to differ materially include, among others, metal prices, competition, risks inherent in the mining industry, and regulatory risks. Most of these factors are outside the control of the Company. Investors are cautioned not to put undue reliance on forward-looking information. Except as otherwise required by applicable securities statutes or regulation, the Company expressly disclaims any intent or obligation to update publicly forward-looking information, whether as a result of new information, future events or otherwise. Neither the TSX Venture Exchange nor its Regulation Services Provider (as that term is defined in the policies of the TSX Venture Exchange) accepts responsibility for the adequacy or accuracy of this release.

To view the source version of this press release, please visit https://www.newsfilecorp.com/release/45322