Vancouver, British Columbia--(Newsfile Corp. - September 22, 2021) - Spearmint Resources Inc. (CSE: SPMT) (OTC Pink: SPMTF) (FSE: A2AHL5) (the "Company" or "Spearmint" or "Optionee") wishes to announce the Company is formulating plans to commence a drill program in Clayton Valley, Nevada where Spearmint currently has three separate lithium projects. These projects include the recently acquired 'Green Clay Lithium Project' comprised of 97 contiguous claims totaling approximately 2,000 acres, the 'Clayton Valley Lithium Brine Project' which has access to some of the deepest parts of the only lithium brine basin in production in North America, and Spearmint's 'Clayton Valley Lithium Clay Project' on which a Technical Report, announced on June 11, 2021, included a maiden resource estimate of 815,000 indicated tonnes and 191,000 inferred tonnes for a total of 1,006,000 tonnes of lithium carbonate equivalent (LCE). Lithium prices have recently broken out to 3-year highs, having seen an approximate 68-percent surge since August 1, 2021, and are now up over 220-percent in 2021.

On September 21, 2021, Noram Lithium Corp. released a new resource estimate, following the phase 5 drill program on its Zeus lithium claystone property located within two kilometres of Albemarle's Silver Peak lithium mine in Clayton Valley, Nevada. At a 400-part-per-million-lithium cut-off, the Zeus deposit now has 363 million tonnes at 923 ppm lithium measured and indicated resources, and 827 million tonnes lithium at 884 ppm lithium inferred resource. Also announced on September 21, 2021, Cypress Development Corp.'s pilot plant for the Clayton Valley lithium project is in its final stages of preparation prior to commissioning. As seen on the map below, Noram Lithium Corp., Cypress Development Corp., and Spearmint share this blanket-like, lithium-bearing claystone formation. Management cautions that past results or discoveries on properties in proximity to Spearmint may not necessarily be indicative to the presence of mineralization on the Company's properties. 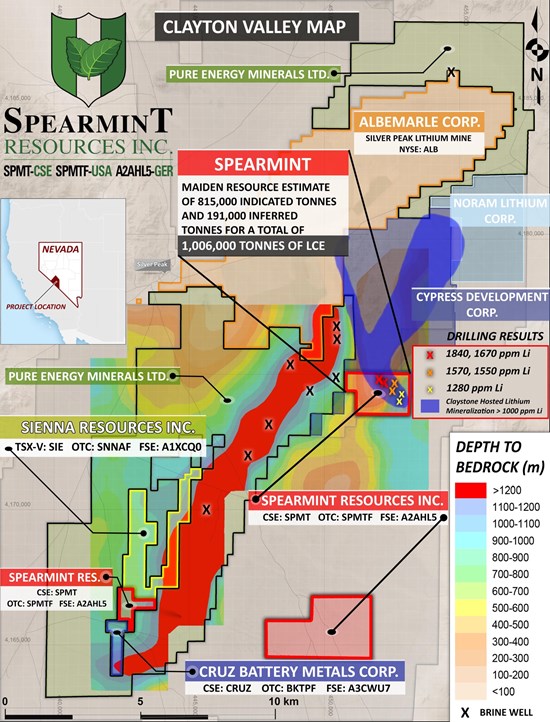 James Nelson, President of Spearmint Resources stated, "We are very pleased to be getting back to work on our lithium projects in Clayton Valley, Nevada, which is the premier address for lithium in North America. Since August 1st, 2021, lithium prices have gone parabolic, increasing over 68% and are now up over 220% since the beginning of 2021. Clearly, this is an opportune time to be recommencing operations on our lithium holdings in Clayton Valley, Nevada. A drill program is currently being formulated. With approximately $3 million in the treasury, we are well funded for multiple drill and work programs in the US and Canada and look forward to building upon an already active and successful year. The remainder of 2021 and beyond will be an extremely active period for Spearmint with potential catalysts coming ahead on multiple projects."

Spearmint's other projects in British Columbia include the 'Safari' Copper-Gold Project consisting of 9,007 contiguous acres located in the northern Quesnel Trough in North-Central BC, and the 'Hammernose' Gold Project consisting of 8,685 acres directly bordering Westhaven Gold Corp.'s Shovelnose Property in the Spences Bridge Gold Belt located in Southern British Columbia, Canada. Management cautions that past results or discoveries on properties in proximity to Spearmint may not necessarily be indicative to the presence of mineralization on the Company's properties.

If you would like to be added to Spearmint's news distribution list, please send your email address to info@spearmintresources.ca.

To view the source version of this press release, please visit https://www.newsfilecorp.com/release/97289