Toronto, Ontario--(Newsfile Corp. - September 1, 2021) - CERRADO GOLD (TSXV: CERT) (OTCQX: CRDOF) ("Cerrado" or the "Company") is pleased to announce its recent strong operating results at Minera Don Nicolás ("MDN") highlighting the robust turnaround and outlook looking forward. Gold equivalent (GEO) production in August was approximately 4,500 ozs or an annual run rate of 54,000 ozs p.a. For the remainder of 2021 Cerrado anticipates monthly gold production to average between 4,000 to 4,500 GEO ozs. The strong performance is a result of significant ongoing enhancements to overall operations in terms of sustained milling rates of over 1,100 tpd and a steady improvement in ore grade feed due to improved grade control procedures.

Cerrado continues to progress its ongoing Internal Preliminary Economic Assessment to develop a gold heap leach operation at its Minera Don Nicolás operation in Santa Cruz, Argentina. Over the longer term this will allow MDN to focus on processing higher grade material through the milling and CIL plant, while lower grade ores will be processed via heap leaching when suitable. The final study and development decision are expected by the end of October 2021 and initial production would be expected by the end of Q2 2022.

Various development scenarios for the project are currently being evaluated in terms of scale and production rates. The overall project considers the mining of various ore deposits and could support an increase in gold production of approximately 20,000 ounces of annual gold production at the Minera Don Nicolás operations with production depending on the development plan selected. The initial project would target the exploitation of the Las Calandrias and Escondido deposits as well as low grade ore and stockpiles from the Martinetas deposit. Based on the contained ounces within the current known resources and stockpile, Cerrado estimates this could sustain operations for approximately 4 years at an average of 20,0000 ounces per annum. Future exploration and ongoing mining is expected to define additional resources to sustain the operation thereafter, providing for potential heap leach life extension. Capital costs are currently estimated at between $15-$20MM and AISC are targeted at approximately $1,100/oz depending on the scale of the initial plant.

Metallurgical representative samples from the Las Calandrias and Escondido deposits were submitted for metallurgical test work to confirm viability for a heap leach operation. Bottle roll and column leach tests were completed by the University of San Juan in Argentina and are shown in Figure 1 below. These results are being used in the ongoing Internal Preliminary Economic Assessment being undertaken currently. 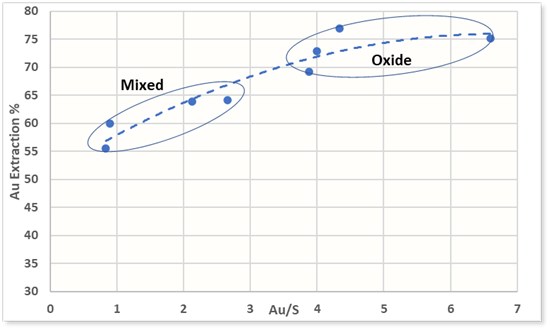 Based on coarse-crushed, bottle roll leach test results %Au extraction curves were completed for the two zones by plotting against the Au/S ratio (proxy for the degree of oxidation). Au recoveries in the Mixed zone were higher than 50%, and for the Oxide zones as high as 77%.

Based on the test work and the availability of a low-grade stockpile at Martinetas, Cerrado is now also targeting to include the low-grade stockpiles and low-grade resources in Martinetas as part of future feed material for the heap leach program. Earlier test work completed by Cerrado for the oxide material at the Martinetas resource achieved similar results. Additional bottle roll leach tests are planned for Escondido samples.

The resources targeted to be included in the Internal PEA will be based on the current combined oxide and transition ore resources of Las Calandrias, Escondido (also known as "Breccia Trend" in prior 43-101 Technical Reports), Zorro, Cerro Oro and Martinetas low-grade stockpiles. Table 1 shows the existing Mineral Resource statements (of near surface material) for those deposits that have not undergone any mining activities since the effective date of the NI 43-101 reports (August 2020 for SRK, and February 2021 for AGP, both reports available on Cerrado's website www.cerradogold.com and on SEDAR). This table is referential and only intends to show the current level of knowledge of the deposits that are targeted for initial inclusion in the study. Material in the current Cerro Oro pit and low-grade stockpiles in Martinetas is excluded from this table. However, Cerrado estimates this material to currently contain at least 11,000 recoverable ounces. It is expected that this amount will increase to some 20,000 recoverable ounces of stockpiled low-grade material from routine mine production, by the time the leaching circuit is expected to be commissioned at this area. Additional upside may be possible from ongoing exploration efforts to outline additional regions of suitable ores and by leaching the primary ore at Las Calandrias as transportation costs would likely preclude this material from being shipped to the mill. Further testwork is planned to confirm the recovery potential.

Cerrado is now undertaking a modest RC drill program in the Calandria/Escondido deposits to upgrade the resource to support the project development decision and some potential to quickly grow available resources in the region.

As stated above, Cerrado believes that the combined resources could support a conceptual production rate from a heap leach operation of approximately 20,000 ounces per year, in addition to the current production at MDN, for an initial mine life of four years. However, as exploration continues, the company believes additional targets could be evaluated as amenable for heap leaching mineralization. As such, the crushing circuit and elution circuits have been designed to be mobile in order to accommodate future discoveries. Design work of the crushing and gold elution circuits has been completed and an Environmental Impact Assessment is in progress. The mine(s) are targeted to produce around 1,500,000 tons of ore per year, and the feed rate to the crushing plant would be approximately 200tph. Mining operations are expected to be conducted using used or rental equipment to minimize costs.

Mark Brennan, CEO & Co-Chairman commented, "We are extremely pleased with the operational performance at Minera Don Nicolás, which is a strong testament to the improvement of the operations by the team at site. We are also excited that the work to date continues to support the development of a heap leach operation at Minera Don Nicolás to increase overall production rates. Adding a heap leach facility not only adds near term growth with low-cost gold production but also adds more opportunities to fully utilize the lower grade resources on the property, while concentrating higher grade feed to our CIL plant. We expect to add significant amounts of low grade leach feed and high grade mill feed resources from our vast land package at Minera Don Nicolás over the longer term to support a long lived production scenario."

This press release contains statements that constitute "forward-looking information" (collectively, "forward-looking statements") within the meaning of the applicable Canadian securities legislation, all statements, other than statements of historical fact, are forward-looking statements and are based on expectations, estimates and projections as at the date of this news release. Any statement that discusses predictions, expectations, beliefs, plans, projections, objectives, assumptions, future events or performance (often but not always using phrases such as "expects", or "does not expect", "is expected", "anticipates" or "does not anticipate", "plans", "budget", "scheduled", "forecasts", "estimates", "believes" or "intends" or variations of such words and phrases or stating that certain actions, events or results "may" or "could", "would", "might" or "will" be taken to occur or be achieved) are not statements of historical fact and may be forward-looking statements.

To view the source version of this press release, please visit https://www.newsfilecorp.com/release/95123