Beijing, China--(Newsfile Corp. - July 27, 2021) - In the context of carbon neutrality, energy saving and emission reduction has become a global trend. Due to its high energy consumption, bitcoin mining has long been criticized by outsiders. It is considered to waste energy while having a large negative impact on climate change. The bitcoin mining industry has further decentralized under policy bans in various countries. Countries such as the United States, Canada, and Kazakhstan have become major destinations for miners to migrate to. At the same time, the profits of overseas mining farms that are still in operation have risen substantially.

With the gradual expansion of bitcoin's influence and market, bitcoin mining industry cannot be completely banned. Therefore, in the context of global carbon neutrality, in order to achieve more energy-saving and emission-reducing green mining, improve energy utilization efficiency to realize the whole industrial chain of "clean energy-electric energy-heat energy," and then realize the positive and negative offset of carbon emissions in the industrial chain to achieve "relative zero emissions," it will become the future way out for the mining industry.

Based on this, energy saving and emission reduction based on carbon neutral backscatter has become a global trend. SAI Technology has released the first carbon footprint emissions report for the supercomputing and mining industry, which was certified by the UNFCCC secretariat. SAI is known for exploring different ways to recover and utilize waste heat to generate additional revenue and offset the cost of electricity.

From May to June of this year, the Chinese government focused on the regulation of the bitcoin mining industry. During this period, a series of policies were introduced regarding a severe crackdown on bitcoin mining projects, including in Inner Mongolia, Xinjiang, Qinghai, Yunnan, and Sichuan.

On May 25, the Inner Mongolia Development and Reform Commission issued the "Eight Measures (Draft for Comment) on Resolutely Combating the Punishment of Virtual Currency" "Mining", requiring a comprehensive clean-up and shutdown of the virtual currency "mining" project;

On May 21, the Financial Stability Development Committee of the State Council held its 51 ST meeting, saying that it would crack down on bitcoin mining and trading;

On June 9, the Qinghai Provincial Department of Industry and Information Technology issued the "Notice on Comprehensively Closing the Virtual Currency Mining Project" to clean up and rectify the mining activities related to virtual currency;

On June 18, the Sichuan Provincial Development and Reform Commission and the Sichuan Provincial Energy Bureau issued the Notice on Clearing and Closing the Virtual Currency Mining Project. For the virtual currency mining project, the relevant power companies in Sichuan need to complete the screening, cleaning and closing work before June 20.

The thunderous regulatory measures, which took about a month from the issuance of the policies to the implementation of the relevant regulations, led to the complete decline of the Chinese mining industry, which once accounted for 75% of the network-wide hash rate, with mining farms migrating overseas en masse. The bitcoin hash rate dropped nearly 50% from its peak. The speed and tight regulation caused great concern in the cryptocurrency field worldwide.

Compared with the ban issued by the Chinese government in 2017, the new rules in 2021 are more stringent and greatly expand the scope of prohibited services. The policy focus in 2017 is ICO. This year's policy cuts deeper, focusing on controlling excessive energy consumption (specifically mining here) and over-the-counter transactions of cryptocurrencies. On the one hand, the reason lies in the environmental protection goal under the trend of global carbon neutrality; on the other hand, it aims at controlling the risks of illegal cross-border asset transfer, money laundering and other illegal and criminal activities, promoting stable and controlled growth, so as to better serve the real economy and create a "virtuous circle and healthy development of economy and finance".

In March 2021, China's 14th Five-Year Plan (2021-2025) incorporated blockchain into the national five-year plan for the first time, which indicates that the integrated application of blockchain technology will play an increasingly key role in the process of digital industrialization and industrial digitalization, and will promote the deep integration of digital technology with the real economy, empower the transformation and upgrading of traditional industries, promote new industries, new modes of new formats and enhance the new engine of economic development.

Against this backdrop, China has voluntarily withdrawn from its dominant market share in mining and trading, in large part to fully focus on the development of the digital economy represented by the digital RMB, and the implementation of the blockchain technology industry applications. The aim is to remove the bad trends caused by early speculation in the industry, and to separate the concept of cryptocurrency from blockchain, advocating a token-free blockchain, reducing the speculative component, and striving for better utilization of blockchain technology at the mechanism level.

There is no doubt that the cryptocurrency environment in China has changed greatly in a short time. The most important thing is that it caused a big adjustment of hash rate. On July 4th, the difficulty of mining bitcoin dropped to a new low in nearly one year after three consecutive declines, which was the biggest continuous decline in the history of mining difficulty of bitcoin. 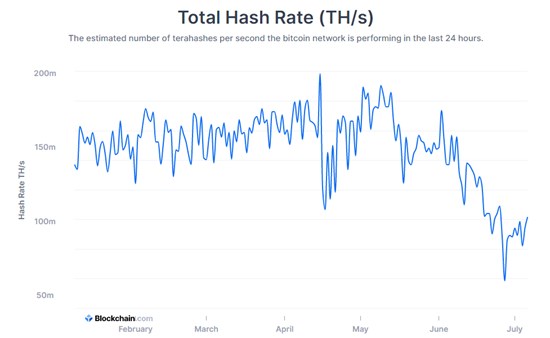 Under the trend of moving towards a low-carbon society, the way for Bitcoin to realize clean mining and improve energy utilization efficiency is not only the upgrading of a single industry, but also a thing for the benefit of mankind. Mining enterprises and miners should play a greater role and undertake more responsibilities and missions.

Because the goal of carbon neutrality involves various social actors across sectors, levels and organizations, from countries to enterprises, the composition of the carbon accounting system has become a huge network of intertwined complexity - from large countries to small products. On the whole, carbon accounting methods can be divided into top-down and bottom-up. The former refers to macro measurement at the national or government level, while the latter includes self-test and disclosure of enterprises, and local report and summary to the central government.

Overall, carbon accounting approaches can be divided into top-down and bottom-up approaches. Top-down measurements are based on the IPCC Guidelines for National Greenhouse Gas Inventories as the dominant international standard, while bottom-up measurements are based on the most widely used GHG Protocol series of standards. These NGO standards and guidelines encourage reporting and communication of accounting results by countries, cities, communities and businesses to ensure consistency in public reporting.

With this trend in mind, SAI Technology, the first technology company to integrate clean energy horizontally, has released its first carbon footprint report ahead of the supercomputing and encryption industries, both as a mission and as a corporate responsibility. The carbon footprint measurement methodology within the report was developed in detail by SAI Technology in accordance with the official Greenhouse Gas Protocol product standards and was officially certified by the United Nations Framework Convention on Climate Change (UNFCCC) Secretariat.

During the winter months, SAI Technology collects the heat generated by the chip calculations, sets up SAICAB as a community heating center, and uses it as a heat generator, which is delivered to residential homes, farms, and other public facilities. In the practice of SAI Technology, heat recovery can raise the temperature of a greenhouse with an outdoor temperature of -7 degrees and keep it at 43.4 degrees. The average heat recovery rate of the whole process is over 80%. In summer, due to the existence of SAIHUB and SAIBOX, SAI Technology can realize seasonal migration, and migrate all its data centers and computing chips to areas rich in water resources in a convenient and rapid way. To ensure that 100% of the power consumption of SAI Technology comes from renewable resources, SAI Technology has signed PPA with local hydropower stations. 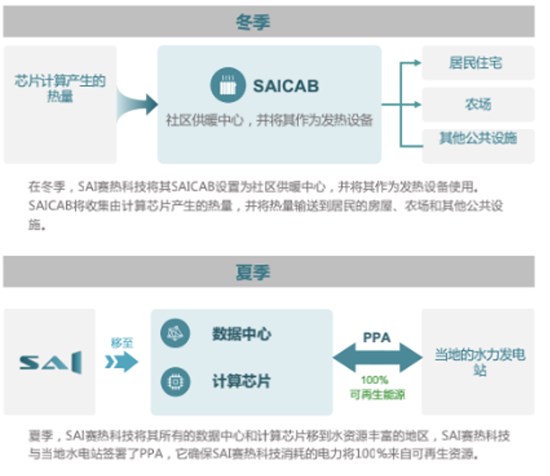 SAI Technology carbon footprint report includes an example of heat recovery for a project in Central Asia. The power used by the chips accounts for 90% of the total power consumption of the company's cryptocurrency mining and supercomputing center. Ninety percent of that generated heat is captured and used for central heating in homes, farms and public facilities. "Using renewable energy - the chip converts to hash rate - using the chip's own heat production." This carbon neutral closed-loop matrix not only reduces the hash rate and heat cost for customers by 35%, but also effectively reduces electricity supporting investment and achieves clean computing. SAI Technology plans to achieve carbon neutrality by 2022. It focuses on four areas: renewable energy, waste heat utilization, water management, and carbon offsetting.

In fact, the above examples are not only examples of SAI Technology itself improving energy efficiency, but also innovations in the thermal industry. Buildings use more than one third of the world's energy. Most of them are used for heating space and water. Most of this heat is generated by burning natural gas, petroleum or propane. The carbon emissions generated in the process can be imagined. Traditional heating equipment involves many constructions and complicated processes. Considering transportation and maintenance, it deviates from the goal of carbon neutrality.

The electric heat pump was widely used by Europeans in 1970s, which is considered as the best solution to reduce the use of fossil fuels. Heat pumps use compressors and refrigerants to transfer heat from one place to another. Even in winter, it can extract heat from outside air and release heat in the house. It can be understood as an air conditioner operating in reverse. However, heat pump is only suitable for areas where the outside temperature is not very cold, and the equipment cost is relatively high, which is obviously not a conventional and feasible scheme.

SAI Technology's chip waste heat heating system shows its advantages. It provides power for chip computing by using clean energy such as hydropower, wind power and photovoltaic power. The heat generated by chip calculation is processed by liquid-cooled heat sink, and the cold/hot water generated can be used for daily and production needs.

According to the model estimation of SAI Technology, a heating center with a capacity of 10,000 kilowatts will be built in the area with latitude of 40-45 degrees, which can meet the heating demand of 200,000 square meters throughout the year. Building a 10,000 kW mining center also requires a lot of energy input. Compared with the traditional heating center and mining center, SAI Technology's "energy-electricity-heat" solution can save 59.7% of construction cost, reduce 37.5% of energy consumption and 54.5% of operating expenses. The data shows that the solution can effectively reduce 23,798 tons of carbon dioxide equivalent emissions.

After several years of operation, SAI Technology has built and well run four major business sections, which are:

At present, the carbon footprint report of SAI Technology has fully confirmed that carbon neutrality can be achieved in the computing and mining industries. The advanced technology matrix of SAI Technology is a feasible solution for mining transformation of mining enterprises and miners.

To view the source version of this press release, please visit https://www.newsfilecorp.com/release/91322