Michael Bennett, President and CEO of Altamira Gold commented, "We are very encouraged by the results of the IP geophysical survey so far. The high chargeability anomaly now extends over 4,400m in an east-west corridor within the Mutum target area. The anomaly is located directly beneath the historic artisanal gold workings where one million ounces of gold was recovered in the last 40 years from the uppermost 20 metres of weathered material suggesting that the IP high chargeability anomaly is mapping the mineralised intrusive at depth. This anomaly is more extensive than we previously envisaged and suggests that a large mineralized system may be present at depth. We are looking forward to starting the initial drill program during July."

The first phase of the Ground based IP survey is now complete over the Mutum target, within the Apiacas Gold project. The survey was commissioned to detect disseminated sulphide concentrations which may be related to gold mineralisation within the underlying syenogranite intrusive. A total of 20 N-S lines covering a total of 39.2 km at 200m E-W spacings have been completed (see Figure 1). 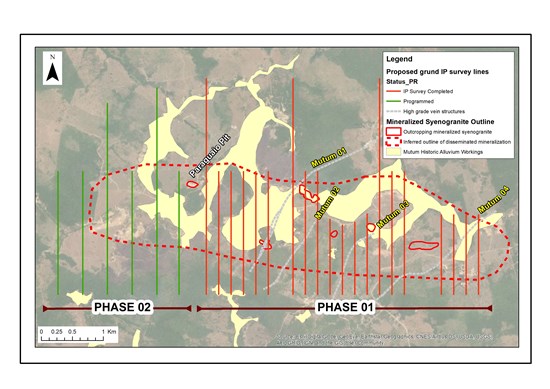 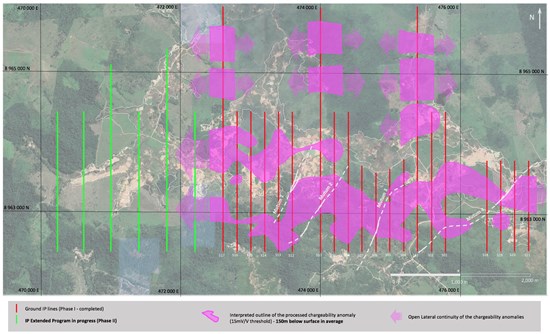 Figure 2 Map showing the preliminary contouring of the high chargeability anomaly in the central part of the Mutum target in the Apiacas project. The anomalies are directly beneath an area with mineralised syenogranite intrusive, mapped and sampled on surface.

The chargeability anomaly has now been extended from an initial strike length of 800m east-west (see press release dated June 8, 2021) to 4,400m in east-west strike extent covering the central part of the Mutum target area (see Figure 2). The anomaly can be traced from line 17 in the extreme west to line 21 in the extreme east of the survey area and a chargeable zone that is 500-1000m in width can now be traced for over 4,400m along strike east-west and is open in both directions. This represents a priority target for drilling.

Three lines 17, 10 and 3 extend north of the central Mutum target area and show other high chargeability anomalies which will be investigated in the next few months by both geological mapping, soil sampling and trenching. Chargeability anomalies are interpreted to represent accumulations of disseminated sulphide at depth, possibly associated with gold. AFC has been retained to carry out Phase 2 of the survey consisting of a further 6 IP lines extending 2.4km to the west of the initial survey area to investigate the source of the alluvial gold recovered from the drainages in this area (see Figure 1).

Mapping and sampling have now expanded the exposure of the mineralised syenogranite within the Paraguaio pit in the North-western part of the Mutum target to the west of line 17 (see Figure 3), and 4 channel samples with a total length of 33.3 m have recently been collected close to a previously reported chip sample which returned 10.93 g/t gold over 3m. Samples have been submitted to the SGS laboratory for preparation and assay results are pending. 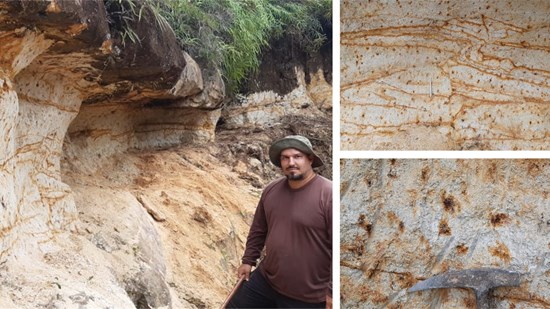 Figure 3 Photos showing the mineralised intrusive rock with the oxidised pyrite giving the rock the characteristic 'leopard spotting' texture in the Paraguaio pit in the north-west of the Mutum target area.

Guillermo Hughes, FAIG and M AusIMM., a consultant to the Company as well as a Qualified Person as defined by National Instrument 43-101, supervised the preparation of the technical information in this news release.

To view the source version of this press release, please visit https://www.newsfilecorp.com/release/89977