Toronto, Ontario--(Newsfile Corp. - July 6, 2021) - Pasofino Gold Limited (TSXV: VEIN) (OTCQB: EFRGF) (FSE: N07) ("Pasofino" or the "Company") is pleased to announce that it has received results from a further 22 infill holes drilled at the Dugbe F deposit including promising results for the 800 m by 100 m thickened zone, first reported in June[1]. Dugbe F is one of two deposits on the Dugbe Gold Project, in which the Company is earning a 49% economic interest.

Ian Stalker, CEO, commented; "Dugbe F continues to deliver on grade and thickness especially the thickened zone given the higher grades and 10-30 m thick intersections. We are confident that this will benefit the updated Mineral Resource Estimate ("MRE") which is planned to be completed in August of this year". 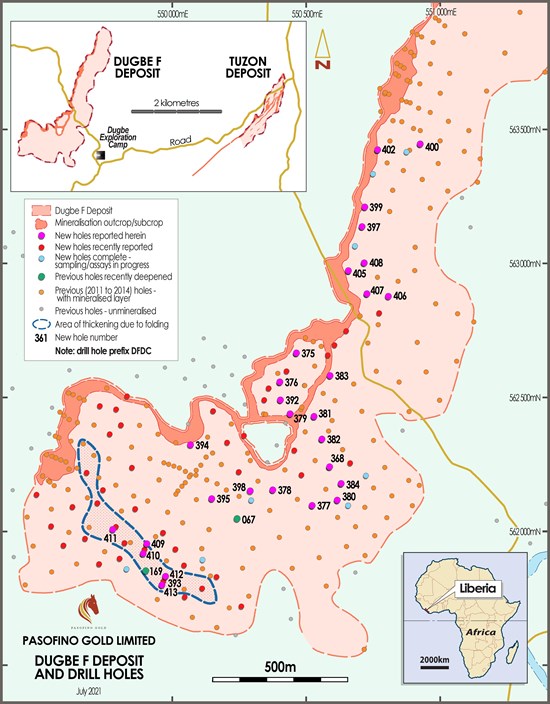 The thickened area in the southern part of the deposit is interpreted to be due to recumbent folding of the mineralized layer so that it is repeated and thickened as shown in figure 3 and appears to be associated with slightly higher gold grades. The newly understood folding and the recent targeted drilling within this 800 m by 100 m area should bring additional material into the update to the Duge F MRE which is expected to be completed in August.

The deposit length as defined by the dimensions of the conceptual pit is 2.5 km (figure 1). The width of the deposit ranges from 1.3 km in the south to 200-300 m in the north. The deposit is an undulating gently dipping sheet which outcrops for its entire length along its western side and dips gently eastwards. The host rock is orthopyroxene gneiss with increased sulphide content (visible pyrrhotite, arsenopyrite and pyrite) and seems to be a largely stratiform layer close to the contact with overlying quartz biotite gneiss.

The mineralized layer is mostly continuous except where cut by cross-cutting pegmatite intrusions or where it comes to surface and has been eroded. The eastward sloping topography has the effect of minimizing the depth to the mineralized layer in some areas which would support a favorable strip ratio if mined.

Figure 2. Close-up plan view map of the southern part of Dugbe F showing the approximate extent of the thickened zone. The cross section indicated is provided in figure 3. Note that the thin intersection in DFDC413 falls outside of the thickened zone the hole being inclined -60 to the SW. 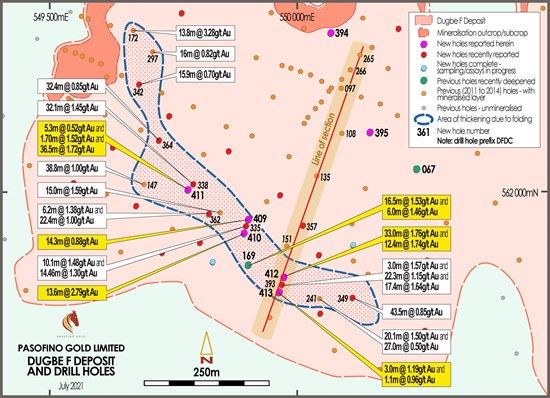 Figure 3. Section through a portion of the southern part of Dugbe F showing the sheet-like mineralized layer and the fold structure at the SW end of the section. 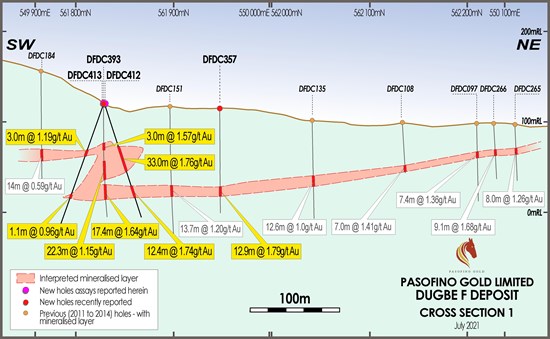 The deposit length as defined by the dimensions of the conceptual pit is 2.5 km (figure 1). The width of the deposit ranges from 1.3 km in the south to 200-300 m in the north. The deposit is an undulating gently dipping sheet which outcrops for its entire length along its western side and dips gently eastwards. The host rock is orthopyroxene gneiss with increased sulphide content (visible pyrrhotite, arsenopyrite and pyrite) and seems to be a largely stratiform layer close to the contact with overlying quartz biotite gneiss. The mineralized layer is mostly continuous except where cut by cross-cutting pegmatite intrusions or where it comes to surface and has been eroded. The eastward sloping topography has the effect of minimizing the depth to the mineralized layer in some areas which would support a favorable strip ratio if mined.

Since 21 January 2021 approximately 6,925 meters have been drilled at Dugbe F for the completion of 82 drillholes. This includes 2 previous holes that were deepened. Infill holes are positioned between existing holes to increase the density intersections within the areas of the deposit that fall within a conceptual mining pit-shell. The objective is to upgrade a large portion of the Inferred Mineral Resource Estimate to Indicated, to increase the resource base for the Feasibility Study. The results of the infill drilling to date are encouraging supporting both grade and continuity.

Table 1. All intersections (not highlights) from the additional 22 new drillholes with assay results. Drillholes are estimated to be close to true thickness (within approximately 10%). DFDC067 and DFDC169 were 2011 holes deepened, the new intersections being below the previous end-of-hole. 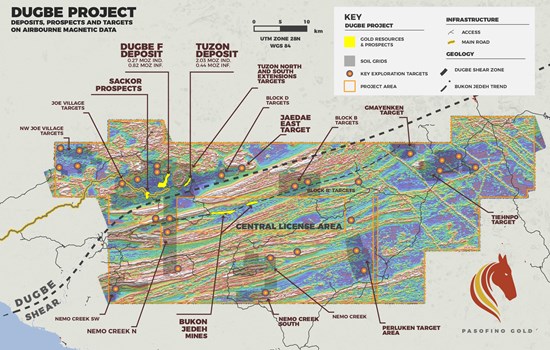 The new holes were positioned using a handheld GPS and lidar data for elevation. Downhole orientation surveys were completed for all holes and core was oriented to assist with interpretation. All drilling and logging was completed in adherence to industry standard operating procedures. Core recovery is over 95% for all mineralized intersections. Core was drilled HQ (65 mm diameter) through the overburden typically 2-10 m depth, then NQ (47 mm diameter) size. Samples were all half core and were prepared by Liberia Geochemical Services in Monrovia then sent for analysis at ALS Kumasi in Ghana, a facility compliant to ISO 17025:2005 for the analytical methods used for the samples. Samples range from 1 kg to over 5 kg depending on the length of each sample. Within every 20 core samples submitted a certified standard and blank was inserted. The results of these samples show acceptable levels of variance. Duplicate (other half of the core) samples were inserted 1 in every 20 core samples to check on precision. Sample weights on dispatch and received sample weights were examined to monitor for sample swaps. All samples were stored and transported to the laboratory securely and accompanied by a company representative until arrival at the laboratory. Similar QAQC measures were undertaken for the previous drillholes reported herein; those samples were analyzed by ALS in Loughrea, Ireland which is an ISO 17025:2005 compliant facility for the analytical methods used for the samples. All samples were analyzed by fire assay with atomic absorption finish on a sample with 50g nominal weight.

Scientific or technical information in this disclosure that relates to exploration results was prepared and approved by Mr. Andrew Pedley. Mr. Pedley is a full-time consultant of Pasofino Gold Ltd.'s wholly-owned subsidiary ARX Resources Limited. He is a member in good standing with the South African Council for Natural Scientific Professions (SACNASP) and is as a Qualified Person under National Instrument 43-101.

About the Dugbe Gold Project

The 2,559 km2 Dugbe Project is located in southern Liberia and situated within the south westmost part of the Birimian Supergroup, which is host to the majority of West African gold deposits. To date, two gold deposits have been identified on the Project; Dugbe F and Tuzon. The deposits are located within 4 km of the Dugbe Shear Zone which is thought to have played a role in large scale gold mineralization in the area. A large amount of exploration in the area was conducted by Hummingbird, including 74,497 m of diamond coring. 70,700 m of this was at the Dugbe F and Tuzon deposits, discovered by Hummingbird in 2009 and 2011 respectively. Both deposits outcrop at surface and may be amenable to open-cut mining. In addition, there are a number of prospects within the Project, including 'Sackor' where gold mineralization has been intersected in drill-holes and where additional drilling is planned. No other prospects have been drill-tested to date. At some prospects extensive trenching identified anomalous levels of gold that require drill-testing. An aggressive exploration program to test the prospects is planned by the Company. In 2019, Hummingbird signed a 25-year Mineral Development Agreement ("MDA") with the Government of Liberia providing the necessary long-term framework and stabilization of taxes and duties. Under the terms of the MDA, the royalty rate on gold production is 3%, the income tax rate payable is 25% (with credit given for historic exploration expenditures), the fuel duty is reduced by 50%, and the Government of Liberia is granted a free carried interest of 10% in the Project. Over $70 million has been spent by Hummingbird on the Project.

Pasofino Gold Ltd. is a Canadian-based mineral exploration company listed on the TSX-V (VEIN). Pasofino, through its wholly-owned subsidiary, is earning a 49% economic interest (prior to the issuance of the Government of Liberia's 10% carried interest) in the Dugbe Gold Project

This news release contains "forward-looking statements" that are based on expectations, estimates, projections and interpretations as at the date of this news release. Forward-looking statements are frequently characterized by words such as "aim", "plan", "expect", "project", "seek", "intend", "believe", "anticipate", "estimate", "suggest", "indicate" and other similar words or statements that certain events or conditions "may" or "will" occur, and include, without limitation, statements regarding the ability to raise the funds to finance its ongoing business activities including the acquisition of mineral projects and the exploration and development of its projects. Such forward looking statements involve known and unknown risks, uncertainties and other factors which may cause the actual results, performance or achievements of the Company to be materially different from any future results, performance or achievements expressed or implied by such forward-looking statements. Such risks and other factors may include, but are not limited to, the ability to successfully file and obtain approval for the Qualifying Prospectus, the ability to obtain all requisite regulatory approvals in respect of the Qualifying Prospectus, the results of exploration activities; the ability of the Company to complete further exploration activities; timing and availability of external financing on acceptable terms and those risk factors outlined in the Company's Management Discussion and Analysis as filed on SEDAR. The Company does not undertake to update any forward-looking information except in accordance with applicable securities laws.

To view the source version of this press release, please visit https://www.newsfilecorp.com/release/89476

Sign up to receive news releases by email for Pasofino Gold Limited or all companies belonging to the Mining and Metals industry.