Note: Intervals are downhole core lengths. True widths are unknown. AuEQ based on a 65:1 silver to gold ratio.

"The 2021 drill program is a clear success. All holes cut multiple intervals of strong gold mineralization associated with significant hydrothermal alteration. In addition, large step-out holes from previously drilled areas, have yet to constrain the limits of the epithermal-related mineralized system."

"In this final batch of assays, BK21-033 yielded 211 gram*metres (409 metres x 0.52 g/t AuEQ), the highest gram*metre intersection to date on the property. This drill hole, along with holes BK21-017 and BK21-032, demonstrates the potential of the northern extent of the Horseshoe zone. This will be a priority area to further drill test once we ramp up our drill program."

"We aggressively stepped-out 400 metres to the east and drilled through post-mineralization volcanic rocks and hit Horseshoe zone-style breccia mineralization right below the basalts. This exploration success significantly opens the eastern side of the property for gold zone expansion."

"All Trench zone holes in 2021 were designed based on results from one hole - discovery hole BK20-012 (17.0 metres of 5.89 g/t AuEQ including 3.0 metres of 23.10 g/t AuEQ). With no assays to guide hole placement while drilling was ongoing, we sited holes to maximize coverage within the known Trench-Horseshoe area, rather than trying to target specific high grade intercepts. Even so, drilling succeeded in delivering numerous additional drill intercepts of similar grade from this area. Our team is now working on a modified and still evolving geological model that we will use in generating our plan for the next phase of drilling. We plan to aggressively explore Buck with an expanded drill program as soon as this geological modelling is complete. The Buck gold mineralized hydrothermal system has been intercepted over an area of approximately 950 metres by 900 metres, based on drilling to date. Its limits and full extent are still unknown."

"We also look forward to reporting the results of our ongoing property-wide exploration program as they become available. Early indications from this work are encouraging and may add targets for drill testing sooner rather than later." 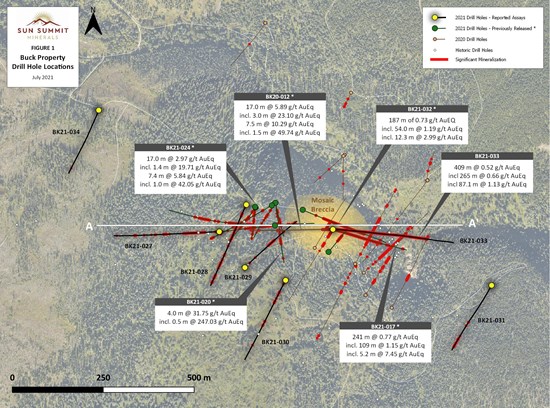 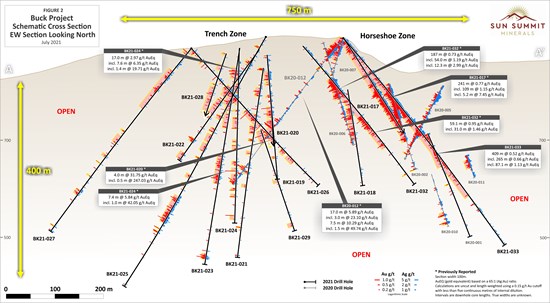 All sample assay results have been monitored through the Company's quality assurance and quality control (QA/QC) program. Drill core was sawn in half at Sun Summit's core logging and processing facility in Houston, B.C. Half the core was sampled and shipped in sealed and secure bags to the ALS Global preparation facilities in Yellowknife, N.T. Samples were prepared using standard preparation procedures. Following sample preparation, the pulps were sent to the ALS Global analytical laboratory in North Vancouver, B.C., for analysis.

In addition to ALS Global laboratory QA/QC protocols, Sun Summit implements an internal QA/QC program that includes the insertion of duplicates, standards and blanks into the sample stream.

This news release has been approved by Sun Summit's CEO, Robert D. Willis, P. Eng. a "Qualified Person" as defined in National Instrument 43-101, Standards of Disclosure for Mineral Projects of the Canadian Securities Administrators. He has also verified the data disclosed, including sampling, analytical and test data, underlying the technical information in this news release.

Sun Summit is working to engage with First Nations on whose territory the Buck Property is located, to discuss their interests and identify contract and work opportunities, as well as opportunities to support community initiatives. The Company looks forward to continuing to work with local and regional First Nations as the project continues.

The Company's exploration programs are being carried out in full compliance with federal, provincial, and municipal guidelines established in response to the global COVID-19 pandemic. Sun Summit has a rigorous infection prevention and control protocol in place to protect the health of employees and contractors, as well as surrounding communities in which the Company works.

The Company is exploring multiple high priority gold and silver targets through methodical, well-funded exploration campaigns with year round drilling access. The Project has high-grade and bulk-tonnage gold and silver potential and is located in a mining-established region that includes many former operating mines and current exploration projects.

Sun Summit is committed to environmental and social responsibility with a focus on responsible development to generate positive outcomes for all stakeholders.

Further details are available at www.sunsummitminerals.com.

Statements contained in this news release that are not historical facts may be forward-looking statements, which involve risks, uncertainties and other factors that could cause actual results to differ materially from those expressed or implied by such forward-looking statements. Factors that could cause such differences, without limiting the generality of the following, include: risks inherent in exploration activities; volatility and sensitivity to market prices; volatility and sensitivity to capital market fluctuations; the impact of exploration competition; the ability to raise funds through private or public equity financings; environmental and safety risks including increased regulatory burdens; unexpected geological or hydrological conditions; changes in government regulations and policies, including trade laws and policies; failure to obtain necessary permits and approvals from government authorities; weather and other natural phenomena; and other exploration, development, operating, financial market and regulatory risks. Except as required by applicable securities laws and regulation, Sun Summit Minerals Corp. disclaims any intention or obligation to update or revise any forward-looking statement, whether as a result of new information, future events or otherwise.

To view the source version of this press release, please visit https://www.newsfilecorp.com/release/89416

Sign up to receive news releases by email for Sun Summit Minerals Corp. or all companies belonging to the Mining and Metals industry.