Guiyang, China--(Newsfile Corp. - June 24, 2021) - On May 28, Big Data Terminology (20 volumes), the world's first multilingual terminology series on the subject, made its debut at the 2021 China International Big Data Industry Expo (CIBDIE) in Guiyang, China. The Guiyang Municipal People's Government, the National Committee for Terminology in Science and Technology, and China Science Publishing & Media Ltd. jointly held the launch ceremony. Alongside the book release, the Global Sharing Platform for Big Data Language Services was also launched and the International Academic Summit of the Digital China Think Tank Forum was held. 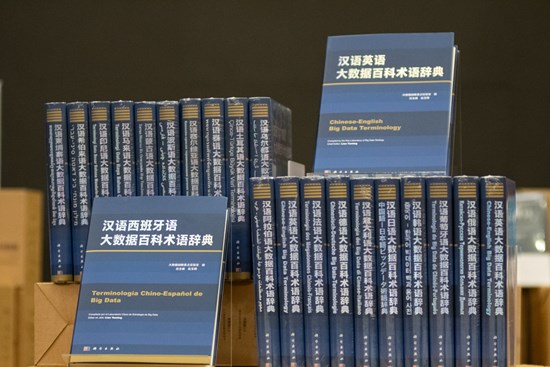 Big Data Terminology is compiled by the Key Laboratory of Big Data Strategy, a new high-end think tank for big data development in China. Professor Lian Yuming, member of the National Committee of the Chinese People's Political Consultative Conference (CPPCC) and director of the Key Laboratory of Big Data Strategy, serves as the chief editor of the series, which is published by Science Press. The world's first smart multilingual terminology series that deals with different aspects of big data, it represents an innovation in further fostering the dissemination of the standard big data terminology system among people from different linguistic and geographical backgrounds. Following the original eleven-language edition, the 20-volume series marks another important milestone for the big data terminology project as well as for the theoretical innovation of the National Big Data (Guizhou) Comprehensive Pilot Zone.

The 20-volume series has four major features. First, it is presented as an encyclopedia. With a focus on the development in the global big data field, the series covers the nine categories of basics of big data, big data strategy, big data technology, big data economy, big data finance, big data governance, big data standards, big data security, and big data law. Together, they comprise a multilingual academic discourse system that is unified, standardized, and conforming to international principles. Second, the series is reviewed by authoritative experts. The entries are reviewed by an expert panel of China National Committee for Terminology in Science and Technology according to the Committee's Principles and Methods for the Review of Terms in Science and Technology. Third, the series covers many languages. As one of its innovative features, this series includes 20 bilingual volumes, each having its content presented in Chinese and another language (Arabic, English, French, German, Italian, Japanese, Korean, Portuguese, Russian, Spanish, Cambodian, Hebrew, Indonesian, Malay, Mongolian, Persian, Serbian, Thai, Turkish and Urdu). Fourth, the series delivers a smart experience. It includes innovative features such as knowledge graphs, audio books, and platform links, offering a smart, platform-based, and systematic reading experience.

Big Data Terminology is the innovative result of interdisciplinary, professional, and open research endeavors, and represents an original and forward-looking achievement in the field of big data and an important part of the efforts of the Key Laboratory of Big Data Strategy to promote standards setting on the basis of the big data terminology project, to build a theoretical system featuring the Digital Civilization Trilogy (Block Data, Data Rights Law, and Sovereignty Blockchain), and to foster a global communication system with the China Data Valley at the core. It is thus highly recommended by both the National Committee for Terminology in Science and Technology and the Alliance of International Science Organizations (ANSO).

The National Committee for Terminology in Science and Technology believes that the publication of Big Data Terminology is expected to greatly enhance China's international influence in the field of big data and relevant rulemaking, contributing significantly to the high-quality development of big data in China and around the world, as well as promoting the international dissemination of big data knowledge and exchange and cooperation in relevant fields. The ANSO notes that the series provides an authoritative template for people in the BRI countries and regions, as well as the world, to better understand a digital China and that it embodies a care for the shared future of mankind.

To view the source version of this press release, please visit https://www.newsfilecorp.com/release/88522

Sign up to receive news releases by email for World Newswire or all companies belonging to the Banking/Financial Services industry.