Thunder Bay, Ontario--(Newsfile Corp. - May 27, 2021) - Metals Creek Resources Corp. (TSXV: MEK) (OTCQB: MCREF) (FSE: M1C1) (the "Company" or Metals Creek, is pleased to announce that the company has been advised by Its Option partner, Quadro Resources Ltd (TSXV: QRO) (OTCQB: QDROF) (FSE: G4O2) ("Quadro" ) of an update on its recently announced soil sampling and prospecting survey on the Careless Cove property (the Property) located southwest of Glenwood in east-central Newfoundland (see Quadro press release dated April 28, 2021). The soil sampling and prospecting survey has been initiated as a first stage to defining targets for drill testing later in 2021.

The Property is located within the Central Newfoundland Gold Belt, eleven km southwest of New Found Gold's (NFG.V) Keats Zone where drilling is defining a very high-grade mineralized zone which includes recent intersections up to 146.2 g/t Au over 25.6 meters (see NFG press release dated May 21, 2021). Quadro's claim licenses are partially surrounded by NFG's Queensway Project and are immediately west of the south-southwest striking Appleton Fault Zone corridor, which hosts the Keats Zone mineralization. (Note - Mineralization hosted on the Queensway Project is not necessarily indicative or representative of the mineralization that may be hosted on the Company's property.)

Follow-up prospecting located rubble (occurrence #2) approximately 50 meters away from occurrence #1 Two samples of this material had the following results.

Western Claim Block (Yellow Fox) - Initial prospecting was carried out by Metals Creek in 2011, resulting in a concentration of highly anomalous gold values with one sample returning an assay of 59.413 g/t Au (main Yellow Fox showing) (see MEK press release dated June 22, 2011). This led to an enhanced work program which included limited soil sampling and trenching. Trenching was completed across the mineralization and initial sampling consisted of 13 selective grab samples taken throughout the trenches with assay values ranging from 214 ppb to 1877 ppb Au and up to 11.1 % Sb, 5.5% Pb, 7 % Zn and 72.9 g/t Ag. The trenches were then channel sampled along their length using a diamond bladed rock saw. The best result from the channels were from trench #1 which assayed 0.306 g/t Au over 26.82m (a composite from 29 continuous samples) and 4.57% Sb over 1.0m. (see Newfoundland Geoscience Resource Atlas Geofile Number: 002D/0779). These results were very encouraging and indicated the potential for a more widespread gold system on the Yellow Fox claim group. No additional work has been carried out since 2011. (Note: The surface grab samples described in this news release are selective by nature and are unlikely to represent average grades of the property).

Quadro acquired an option to earn a 100% interest in the claim licenses from Metals Creek Resources Corp. (See MEK News Release dated August 10, 2020) The terms of the acquisition are outlined as follows:

Alexander (Sandy) Stares states, "This option agreement is one of two option agreements (the other being the Clarkes Brook option with General Gold) that gives MEK and its shareholders additional exposure to the Central Newfoundland Gold Belt."

Metals Creek also reports that drilling is ongoing at Dona lake Gold Property and results will be released once they are received and compiled. In addition, exploration permits for prospecting and geochemical sampling have been approved and received for the River Road property in the Central Newfoundland Gold Belt.

Wayne Reid, P. Geo, a Director for the Company and a qualified person as defined in National Instrument 43-101, is responsible for this release, and supervised the preparation of the information forming the basis for this release.

Analyses were performed by Eastern Analytical of Springdale, NL with ISO 17025 accreditation. Samples were transported in sealed bags to Eastern and all samples were assayed using industry-standard assay techniques for gold. Gold was analyzed by a standard 30-gram fire assay with an AA finish.

(Note: The surface grab samples described in this news release are selective by nature and are unlikely to represent average grades of the property). 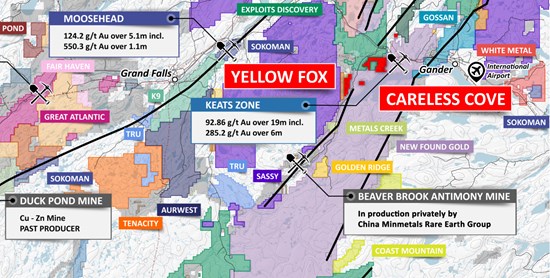 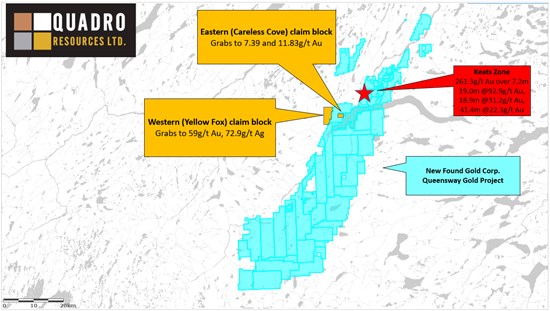 Metals Creek Resources Corp. is a junior exploration Corporation incorporated under the laws of the Province of Ontario, is a reporting issuer in Alberta, British Columbia and Ontario, and has its common shares listed for trading on the Exchange under the symbol "MEK". Metals Creek has earned a 50% interest in the Ogden Gold Property from Newmont Corporation, including the former Naybob Gold mine, located 6 km south of Timmins, Ontario and has an 8 km strike length of the prolific Porcupine-Destor Fault (P-DF). In addition, Metals Creek has signed an agreement with Newmont Corporation, where Metals Creek can earn a 100% interest in the past producing Dona Lake Gold Project in the Pickle Lake Mining District of Ontario.

Additional information concerning the Corporation is contained in documents filed by the Corporation with securities regulators, available under its profile at www.sedar.com.

To view the source version of this press release, please visit https://www.newsfilecorp.com/release/85515

Sign up to receive news releases by email for Metals Creek Resources Corp. or all companies belonging to the Mining and Metals, Precious Metals industries.