Vancouver, British Columbia--(Newsfile Corp. - May 18, 2021) -  Inomin Mines Inc. (TSXV: MINE) reports a 115 line-kilometre (km) ground magnetic survey is underway at the company's Beaver sulphide nickel project in south-central British Columbia. The survey is designed to delineate drill targets in magnetite hosted nickel mineralization. The survey will encompass 570 hectares in the North Lobe and Spur zones situated on the south-eastern side of the property. Collectively these zones are approximately 6 km long, as defined by airborne magnetic surveys (see survey area map). Scott Geophysics Ltd. of Vancouver, BC is completing the survey.

An airborne EM survey will also be tested on the property to ascertain its viability for defining higher concentrations of nickel mineralization. Should it prove effective, a larger program will be conducted. The results of the geophysical surveys will be used to prioritize targets for drilling later in 2021.

John Gomez, President & CEO of Inomin Mines, says, "The ground magnetic program complements the airborne surveys that have identified several large zones of magnetite hosted nickel mineralization. The new data from the ground survey will assist us to prioritize drill targets. The initial EM test survey may help us source nickel in non-magnetic areas as well as higher grading areas; if so, this would be a real game-changer."

In 2015, SGS Canada Inc. completed a QEMSCAN (Quantitative Evaluation of Minerals by Scanning Electron Microscopy) metallurgical study on a sample from drill core demonstrating that 91% of the nickel is present in a recoverable form. Of the 91% recoverable nickel, 48% is Heazlewoodite, 42% Pentlandite, and 1% forms the nickel alloy awaruite.

The Beaver and Lynx properties are relatively flat and easily accessible via all-season roads as well as a network of forestry roads providing access to most of the properties. Other important nearby infrastructure includes electricity and railroad. Skilled workers, contractors, and suppliers are available locally from the city of Williams Lake situated about 20 kilometres south of Lynx. 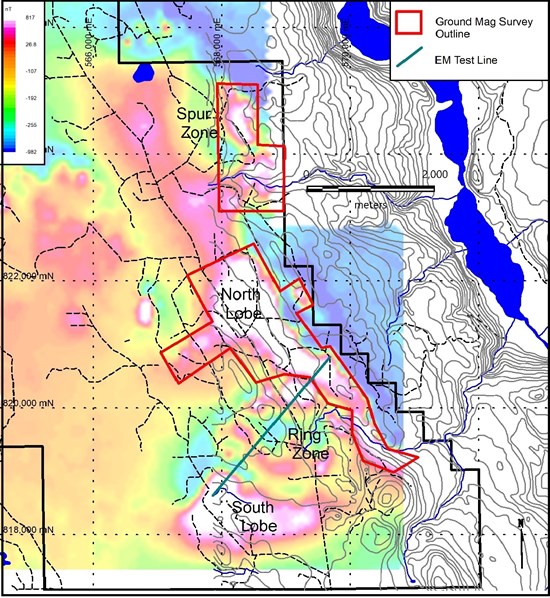 Above: Map of south-eastern region of Beaver property with magnetite zones hosting nickel and cobalt mineralization in white and magenta.

Inomin Mines Director, L. John Peters P.Geo, a qualified person as defined by NI 43-101, has reviewed and approved the technical information in this news release.

Inomin Mines is engaged in the identification, acquisition and exploration of mineral properties, especially gold, silver and nickel projects that display strong potential to host significant mineral resources. Inomin holds the La Gitana and Pena Blanca gold-silver properties in Mexico. The company owns a 100% interest in the Beaver-Lynx sulphide nickel project in south-central British Columbia, and the Fleetwood zinc-copper-gold-silver VMS project in south-west British Columbia. Inomin also owns 100% of the King's Point gold-copper-zinc project in Newfoundland under option to Maritime Resources Corp.. Inomin trades on the TSX Venture Exchange under the symbol MINE. For more information visit www.inominmines.com and follow us on Twitter @InominMines.

To view the source version of this press release, please visit https://www.newsfilecorp.com/release/84383

Sign up to receive news releases by email for Inomin Mines Inc. or all companies belonging to the Mining and Metals, Precious Metals industries.