Palladium One Intersects 2.1 g/t Pd_Eq over 38 Meters in the Lower Zone and Expands the Upper Zone at Kaukua South, Finland

46 holes (9,469 metres) have been drilled as part of the 17,500-meter Phase II Resource Definition drill program at Kaukua South, including today's results 34 have been released, while results for 12 holes await assays. Additionally, assay results are pending for 12 drill holes at the Haukiaho Zone, where the Company completed infill drilling in advance of a NI43-101 resource estimate. Drilling is currently in hiatus for the spring thaw and is schedule to resume in later May.

When drilling resumes the intent is to target open pit resource definition of the Lower mineralized zone (down to 300 meters) on the western side of Kaukua South, and to extend mineralization immediately south of the existing Kaukua NI43-101 Open Pit constrained resource estimate.

"Our understanding of an Upper Zone of mineralization continues to expand and so does our realization that it could add a significant amount of resources to the planned NI43-101 resource estimate.

The Upper Zone lies in the hanging wall of the high-grade Lower Zone which has been the primary focus of the Phase II drill program.

The Upper Zone's position could have a significant positive economic influence on the any future open pit scenario; and as evidenced by hole LK21-064 it can locally carry substantial grades," said Derrick Weyrauch, President and CEO.

Kaukua South consists of two subparallel mineralized zones, the very continuous Lower Zone near the base of the Intrusion, which is very similar to the Kaukua deposit with high PGE tenors, has been the main focus of the current drill program. The Upper Zone occurs in the hanging wall of the Lower Zone and is characterised by higher Cu-Ni values and lower PGEs (Table 1). The Upper Zone is typically more sporadic than the Lower Zone but can exhibit great widths such as seen in hole LK21-064 which returned 50.6 meters grading 0.92 g/t Pd-Eq (Figure 2). It's position in the hanging wall relative to the Lower Zone is key and has significant positive implications for the open pit potential of Kaukua South as it could reduce the strip ratio and allow the pit to extend to greater depths than originally contemplated and thereby improve project economics. As such, the Company is planning to define the Lower Zone down to a 300-meters depth in areas with strong Upper Zone mineralization (Figure 1.). 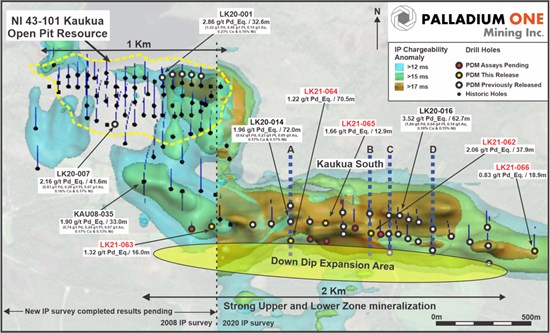 Figure 2a. Cross Sections A, B, C and D showing in Figure 1. Illustrating the Upper and Lower Zones in Kaukua South. Holes from this release are labelled in red.

Figure 2b. Cross Sections A, B, C and D showing in Figure 1. Illustrating the Upper and Lower Zones in Kaukua South. Holes from this release are labelled in red.

Palladium One Mining Inc. is an exploration company targeting district scale, platinum-group-element (PGE)-copper nickel deposits in Finland and Canada. Its flagship project is the Läntinen Koillismaa or LK Project, a palladium dominant platinum group element-copper-nickel project in north-central Finland, ranked by the Fraser Institute as one of the world's top countries for mineral exploration and development. Exploration at LK is focused on targeting disseminated sulfides along 38 kilometers of favorable basal contact and building on an established NI 43-101 open pit resource.

To view the source version of this press release, please visit https://www.newsfilecorp.com/release/83570