The following significant results (Table 1) were received from a Reverse Circulation ("RC") hole drilled on the C1 target (see Figure 1), which covers a nine (9) kilometres portion of the Kranzberg Fault Zone extending westwards from the Onguati - Brown Mountain - Western Workings prospects. Historical sampling on the C1 target shows zones of anomalous gold associated with structural features along this fault zone. Antler has completed nine (9) holes totaling 1,741 metres of broad spaced scout RC drilling along the northeastern half of this trend.

Dan Whittaker, President and CEO commented, "We are very encouraged with these initial drill results and the potential they represent for the Central Project. The results demonstrate the importance of the Kranzberg Fault Zone as a large scale mineralized structure which is largely unundrilled within the Project area. We look forward to immediately continuing drilling in this area, and further to the southwest where our team has identified additional look-alike targets. This work will further refine our exploration model and assist our understanding of the mineralization controls in the area."

Lithologies intersected in drill hole C1L14-4-3 include dark grey marbles with subordinate lenses of coarser light grey marbles, psammites and pelites, all from the Karibib Formation of the Swakop Group. Zones of alteration in the form of ferroan dolomitization are observed more prominently in the dark grey marble. Mineralization is associated with both foliation parallel and cross-cutting quartz-carbonate veins and sulphides (pyrite, pyrrhotite and chalcopyrite) developed as disseminated grains, stringers and small veins, parallel foliation or along fractures, and as quartz vein constituents. 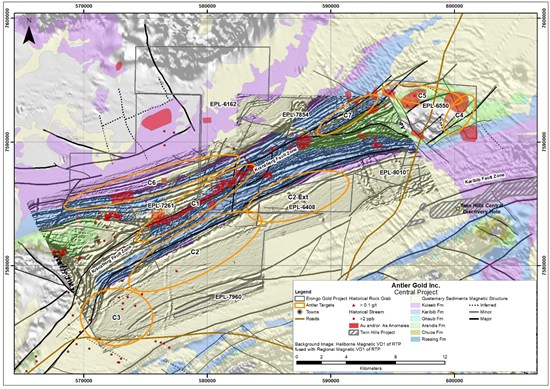 Figure 1: Target areas C1 to C7 within the Central Project.

The remaining eight (8) holes drilled on target C1 did not produce significant results.

The C2 target extends over a strike length of 16 kilometres and covers the prospective Karibib / Kuiseb contact on the northern limb of the syncline that hosts Osino Resources' Twin Hills deposit. A high resolution heliborne magnetic survey, completed in late 2020, has facilitated the identification of areas with structural complexity which provide favorable settings for gold mineralization. The company plans to advance this target to a drill ready stage through its recently completed field work programs which included ground IP surveying, geological traverse mapping and soil / calcrete traverse sampling. Results of this recently completed field work are expected shortly and will be interpreted when received. Drill targets will be defined based on the coincidence of zones of high chargeability (identified from the lP survey), gossanous/oxidized surface expression of mineralization (as observed during the geological traverse mapping) and structural complexity (as defined from interpretation of the heliborne high-resolution magnetic data and geological traverse mapping). An initial 3,000 metres of RC drilling has been planned with an additional 2,500 metres contingent on positive results.

Nine RC drill holes totaling 1,913 metres of the planned 3,200 metres Phase 1 program were completed in December 2020 along selected IP survey lines in the vicinity of the Sandamap Shear, identified as target W1 on the Western Project. This scout drilling program was designed to test a range of IP targets occurring over a strike length of approximately 3.5 kilometres (see Antler's news release dated December 2, 2020). Significant results are shown in Table 2 below:

Lithologies intersected within drill holes within target W1 consisted of sequences of biotite schist, pegmatite (quartz-feldspar-mica-tourmaline) and subordinate quartz veins with biotite schist being the most predominant. In all holes drilled, a 50 to 60 metres oxidized zone was encountered from surface in which lithologies were weathered to varying degrees and sulphides replaced by iron oxide. Below this oxidized zone lithologies were relatively unaltered unless affected by hydrothermal alteration and sulphides - predominantly pyrite with trace arsenopyrite and pyrrhotite. The presence of silicious, carbonate, clay and sericite alteration were interpreted as indicative of hydrothermal alteration. Mineralized intercepts are observed to be narrow and contain highly variable gold values.

Antler has also completed a geochemical survey from a detailed soil sampling grid over the Sandamap East (W1 Target) (see Antler's news release dated November 18, 2020). Gold results are highly variable and anomalous samples plot as singleton or clusters on or close to the mapped shears or zones of ferruginization / quartz veining, or associated with IP chargeability anomalies. Anomalous aresenic results are mostly concentrated to the NW half of the sample lines specifically within the ferruginized Kuiseb Schists that host the delineated shears.

The company conducted IP surveying and geological traverse mapping over the W2 Target (Hakskeen). The objective of the program was to delineate drill targets at depth along strike of the historically defined 1.5 kilometres Hakskeen skarniferous zone. These data have been incorporated into the historical data and interpreted. It is clearly evident that the magnetite skarn and associated dolomitization and alteration coincides with a magnetic and IP anomaly that can be traced for almost 2.5 kilometres (see Figure 2). The IP data indicate that this anomaly extends to a depth of at least 200 metres. The historical gold-in-soil anomaly is spatially coincident with this IP anomaly and the shallow (30 metres deep) historical RC drilling intersected narrow anomalous gold zones. Work to date indicates that W2 represents a compelling drill target. 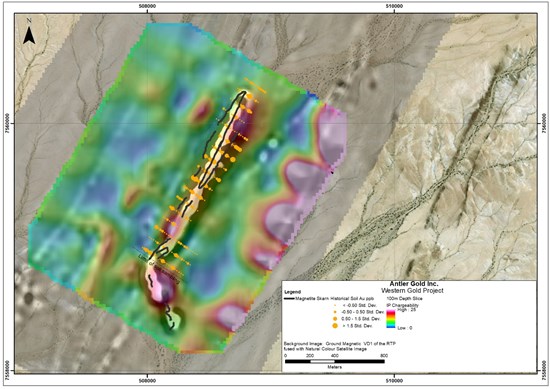 The company has completed regionally spaced soil sample traverses over the W3 target. In total 581, 50 metres spaced, soil samples were collected along 18 traverses spaced at approximately 500 metres apart. The interpretation of soil sampling results at W3 show gold results to be highly variable with limited gold-in-soil anomalies being identified. The anomalous samples plot on or close to the targeted NE and NNE structures delineated in the historical geological mapping. Numerous arsenic-in-soil anomalies are evident within the Kuiseb Schists that host an increase in mapped NNE structures and could represent a favourable setting for mineralization. The observed gold and arsenic distributions are interpreted to be significant and warrant follow-up infill sampling and geological mapping.

All reported intercepts are apparent widths rounded to the nearest metre. True widths are unknown at this stage. Total intercepts reported are unconstrained and are at 0.1 g/t cut-off, minimum 1 metre wide and no more than 1 metre internal dilution.

Peter Hollick, BSc. (Hons), is a Consulting Geologist at Remote Exploration Services (Pty) Ltd. and has reviewed and approved the scientific and technical information in this news release. Mr. Hollick is a registered Professional Natural Scientist with the South African Council for Natural Scientific Professions (Pr. Sci. Nat. No. 400113/93) and a Qualified Person for the purposes of National Instrument 43-101.

Antler Gold Inc. (TSXV: ANTL) is a Canadian company, focused on the acquisition and exploration of gold projects in Namibia. Antler's Erongo Gold Project covers areas of the Navachab-Damara Belt, which is highly prospective for gold, and shares geologically similarities to the areas containing the known Namibian Gold mines (QKR's Navachab and B2 Golds' Otjikoto) as well as Osino's recent Twin Hills discovery. Antler's total license position now comprises five licenses (EPL 5455, 6162, 7261, 6550 and 6408) under option and a further five (EPL 7854, 7930, 7960, 8010 and 8042) under application, for a total landholding of approximately 85,341ha (853.41km2). Antler is currently focusing its efforts on advancing its Erongo Gold Project, which is located approximately 130 kilometres north-west of Namibia's capital city Windhoek. Namibia is recognized as one of Africa's most politically stable jurisdictions, with an extremely well-established national infrastructure. The Company continues to assess new in country opportunities and expand its Namibian portfolio.

Further details are available on the Company's website at www.antlergold.com.

This press release may contain forward-looking information, such as statements regarding the completion of the work in Namibia by Antler and future plans and objectives of Antler. This information is based on current expectations and assumptions (including assumptions in connection with the continuance of the applicable company as a going concern and general economic and market conditions) that are subject to significant risks and uncertainties that are difficult to predict, including risks relating to the ability to satisfy the conditions to completion of exploration programmes and work in Namibia. Actual results may differ materially from results suggested in any forward-looking information. Antler assumes no obligation to update forward-looking information in this release, or to update the reasons why actual results could differ from those reflected in the forward-looking information unless and until required by applicable securities laws. Additional information identifying risks and uncertainties is contained in filings made by Antler with Canadian securities regulators, copies of which are available at www.sedar.com.

To view the source version of this press release, please visit https://www.newsfilecorp.com/release/82684

Sign up to receive news releases by email for Antler Gold Inc. or all companies belonging to the Mining and Metals, Precious Metals industries.