Following up on the results from an electron microprobe study that successfully showed monazite was the mineral host for gallium as well as REEs (see News Release dated February 17, 2021), the Company re-analyzed select samples with high-grade rare earth oxide ("REO") results from each zone to determine the extent of gallium mineralization over the Property (Table 1). The results from the recent study shows gallium concentrations ranging from 0.01 to 0.104 wt% Ga2O3, and a positive linear correlation between gallium and REO suggests that all monazite on the Property contains gallium: more monazite means more REO and gallium. High-grade gallium is considered anything greater than 0.010 wt% Ga2O3.

Up to 90% of primary global gallium supply is a by-product of processing of bauxite (alumina ore) with lesser amounts derived from sphalerite (ZnS) production. Production of gallium is therefore limited by global economic and social factors that influence the production of the principal mineral commodities (i.e., aluminum or zinc). It takes multiple cycles of bauxite processing before the gallium content reaches its production starting concentration point of approximately 100 - 125 ppm Ga2O3, whereas Ga2O3 from Alces Lake monazite would have approximately 10x to 20x higher starting concentrations.

Gallium is one of several elements deemed "critical" by the United States Government (i.e., restricted supply by China, Kazakhstan and Ukraine, and in high-demand) that is used in numerous modern technological applications, in wireless communications such as 5G, cell phones, laser diodes, semiconductors, solar energy magnetic materials, and military defense. A significant potential exists for bottlenecks in the gallium supply chain because of rapid growth in areas of green/clean energy technologies.

Much like rare earth elements, gallium is widely dispersed in nature but rarely found in economically extractable quantities. For example, the Apex mine, southwestern Utah, USA, was the only primary mined source of gallium (and germanium) until its closure in 2011 by Teck Resources Limited. The mine operated intermittently over 100 years since 1884. A historic estimate for the average concentration of gallium was 0.032 wt%, with locally occurring grades up to 0.148 wt% gallium (USGS - Gallium Statistics and Information).

All analytical results reported herein have passed internal QA/QC review and compilation. The technical content in this news release was reviewed and approved by Dr. Irvine R. Annesley, P.Geo, Advisor to Appia's Board of Directors, and a Qualified Person as defined by National Instrument 43-101.

Since detailed exploration began at Alces Lake in 2017, a total of seventy-four (74) REE, gallium and uranium bearing surface zones and occurrences over 45 km of the System have been discovered on the Property. To date, less than 1% of the Property has been explored with diamond drilling. The Property is in Saskatchewan, the provincial jurisdiction that is developing a "first-of-its-kind" rare earth processing facility in Canada, scheduled to become operational by 2022.

The Property encompasses some of the highest-grade total and critical rare earth elements ("CREE") and gallium mineralization in the world. CREE is defined here as those rare earth elements that are in short-supply and high-demand for use in permanent magnets and modern electronic applications such as electric vehicles and wind turbines, (i.e: neodymium (Nd), praseodymium (Pr) dysprosium (Dy), and terbium (Tb)). The Alces Lake project area is 17,577 hectares (43,434 acres) in size and is 100% owned by Appia. The project is located close to an old mining camp with existing support services, such as transportation (i.e., 15 km from the nearest trail), energy infrastructure (hydroelectric power), a 1,200 m airstrip that receives daily scheduled services, and access to heavy equipment.

Appia is planning to aggressively explore the Property during the summer months of 2021. The Company is fully-funded and committed to complete the largest exploration and diamond drilling program on the Property to date.

Appia is a Canadian publicly-listed company in the uranium and rare earth element sectors. The Company is currently focusing on delineating high-grade critical rare earth elements and uranium on the Alces Lake property, as well as prospecting for high-grade uranium in the prolific Athabasca Basin on its Loranger, North Wollaston, and Eastside properties. The Company holds the surface rights to exploration for 65,601 hectares (162,104 acres) in Saskatchewan.

The Company also has a 100% interest (subject to a 1% Uranium Production Payment Royalty and a 1% Net Smelter Return Royalty on any precious or base metals payable, provided that the price of uranium is greater than US$130 per pound) in 12,545 hectares (31,000 acres), with rare earth element and uranium deposits over five mineralized zones in the Elliot Lake Camp, Ontario. The Camp historically produced over 300 million pounds of U3O8 and is the only Canadian camp that has had significant rare earth element (yttrium) production. The deposits are largely unconstrained along strike and down dip. 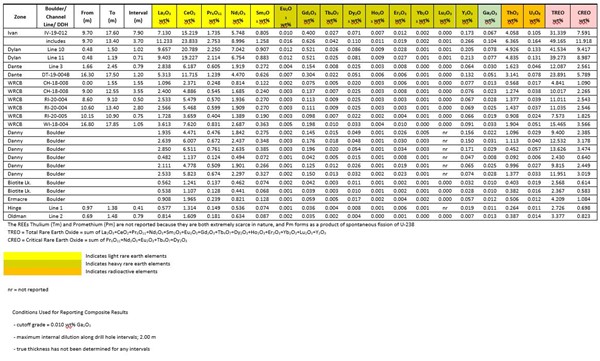 To view an enhanced version of this graphic, please visit:
https://orders.newsfilecorp.com/files/5416/78564_table.jpg

To view the source version of this press release, please visit https://www.newsfilecorp.com/release/78564