The company reported partial results for this drill hole in its November 23, 2020 press release. These complete results add a second zone of mineralization that significantly expands the mineralized interval at Aquila. Mineralization is open at depth and along strike in both directions.

Note: All numbers are rounded and widths represent downhole lengths. True thickness is estimated at 35-90% of downhole thickness.

Heliostar VP of Exploration Sam Anderson commented, "The Aquila target is a new zone and hitting such a wide, shallow interval of gold mineralization in the first hole opens up an entirely new and exciting area of exploration at Unga. Aquila, located 6km southwest of the SH-1 resource, along the same vein and with outcropping gold mineralization over 850m, is one of the high potential exploration targets identified and drilled in 2020. Due to the temperate climate of the project, the company will recommence drilling in late March and stepping out from this discovery hole will be a priority for the 2021 program."

The Aquila target is a series of outcropping epithermal quartz veins located along the Shumigan vein trend. Heliostar targeted the area because historic work showed multiple areas of outcropping mineralization whilst limited, widely-spaced drilling did not match surface results.

In the early 1980s, a UNC Teton Exploration Drilling Inc.-operated program discovered the area and defined multiple veins over a 1,000 metre by 500 metre area within an interpreted zone of structural dilation. Trenching along the main vein zone returned a best result of 11.48 g/t gold and 53.47 g/t silver over 3.66m (The qualified person has not been able to independently verify the historical assay results presented above and Heliostar's drilling is to establish the grades and widths of vein targets at Aquila).

Historic drilling was completed at nine locations throughout the Aquila target area and the program was handicapped by poor core recovery. No significant additional exploration has been undertaken since the early 1980s until Heliostar's drill program in 2020.

Heliostar commenced drilling at the approximate location of a historic hole that had poor core recovery in the target vein zone, with hole AQ20-01 and follow-up holes AQ20-02 to AQ20-05 testing the vein both along strike and at depth. This drilling had significantly improved core recovery from the main Amethyst vein and has defined a second vein orientation, the Ankle Creek vein, which is a very favourable development allowing considerable room for expansion along strike and at depth.

The veins at Aquila consist of quartz, calcite and amethyst, and frequently contain brecciated clasts of veins and wall rock. Quartz commonly exhibits cockscomb and colloform epithermal textures, and the veins have experienced multiple pulses of brecciation and vein formation. Mineralization is associated with minor amounts of finely disseminated sphalerite and galena in the vein, and occasional pyrite along the vein margins. 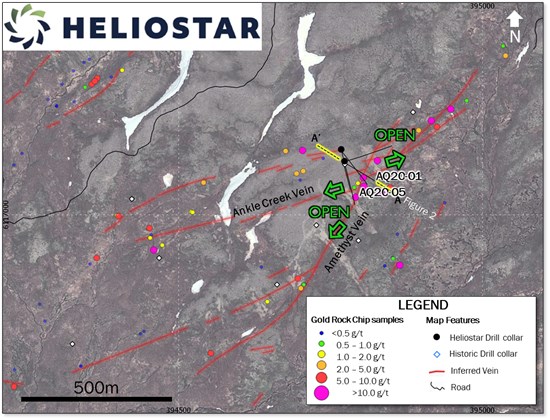 Table 1: Table of intersections from the Aquila Zone. True thickness is estimated at 35-90% of downhole lengths. 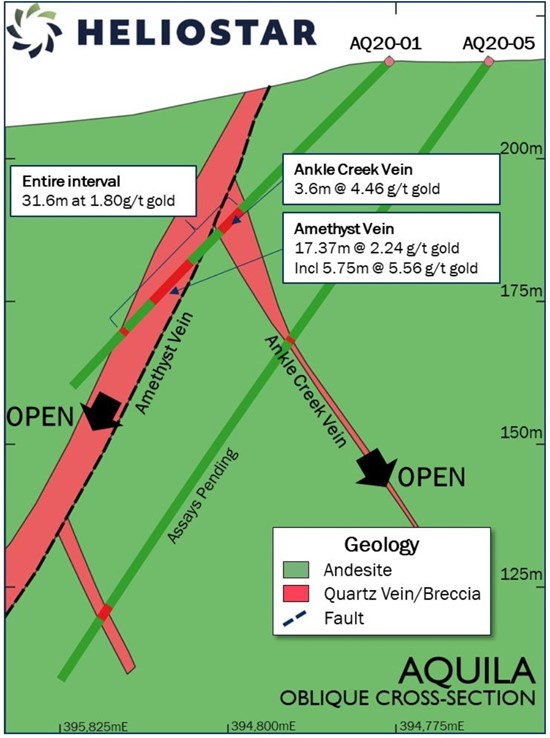 To view an enhanced version of Figure 2, please visit:
https://orders.newsfilecorp.com/files/7729/75166_heliofigure2.jpg 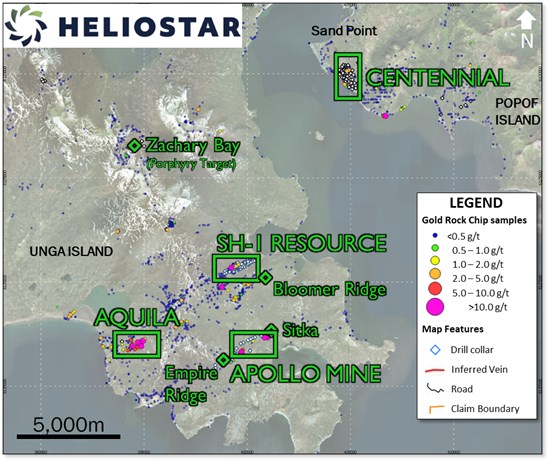 Drill core samples were shipped to ALS Limited in Fairbanks, Alaska for sample preparation and for analysis at the ALS laboratory in North Vancouver. The ALS Fairbanks and North Vancouver facilities are ISO/IEC 17025 certified. Silver and base metals were analyzed using a four-acid digestion with an ICP finish and gold was assayed by 30-gram fire assay with atomic absorption ("AA") spectroscopy finish and overlimits were analyzed by 30g fire assay with gravimetric finish.

To view the source version of this press release, please visit https://www.newsfilecorp.com/release/75166