Toronto, Ontario--(Newsfile Corp. - February 16, 2021) - McLaren Resources Inc. (CSE: MCL) (FSE: 3ML) ("McLaren" or the "Company") is pleased to announce that it is moving forward with plans to carry out exploration work during 2021 on its 100%-owned gold exploration properties which are located in the prolific Timmins Gold District of Northeastern Ontario, Canada.

McLaren has filed applications for exploration permits with the Ontario Ministry of Energy, Northern Development and Mines ("MENDM") for the McCool and Kerrs gold properties which were acquired from Newmont Corporation ("Newmont") in mid-2020 in exchange for a four-year option on McLaren's Augdome gold property which lies immediately east of Newmont's past-producing Dome Gold Mine in Timmins (see news release dated May 14, 2020).

The McCool and Kerrs properties are located within the Abitibi Greenstone Belt along the Destor-Porcupine Deformation Zone, which is host to many of the gold deposits in the area, approximately 73 km east of Timmins city centre. The McCool and Kerrs properties are located near several gold mines and development projects including the Black Fox Mine, the Fenn Gib project, the Golden Highway project, the Garrison project and the Holt Holloway Mine complex, which are all situated along Hwy 101 east of Timmins. McLaren also owns a 100% interest in the past-producing Blue Quartz Gold Mine property which is located approximately 22 km west of the McCool property (see news release dated October 26, 2020).

Upon the issuance of exploration permits by MENDM, McLaren plans to perform geophysical surveys followed by exploration drilling into the known gold zones located on the McCool property. Initial stage linecutting and geophysical studies are also planned for 2021 on the Kerrs property. Both the McCool and Kerrs properties have been the target of various exploration programs by other operators over the years but no exploration work has been undertaken for over 25 years and both properties have significant gold zones that warrant follow-up diamond drilling.

McLaren also announces the grant of options to service providers for the purchase of 500,000 common shares at an exercise price of $0.10 per share for a period of two years.

The information presented in this news release has been reviewed and approved by Kenneth Guy, P.Geo, a consultant to McLaren and the Qualified Person for McLaren, as defined by National Instrument 43-101 "Standards of Disclosure for Mineral Projects".

McLaren has been focussed on exploration work on its gold properties in the Timmins Gold District of Northeastern Ontario. McLaren now owns a 100% interest in the past-producing, 640 ha, Blue Quartz Gold Mine property as well as the 275 ha McCool and 775 ha Kerrs gold properties, all located within the Abitibi Greenstone Belt along the Destor-Porcupine Deformation Zone, which is host to many of the gold deposits in the area, approximately 73 km east of Timmins. McLaren also owns a 100% interest in the 408 ha Augdome gold property which is located in Tisdale and Whitney Townships immediately east of the Dome Mine owned by Newmont. The Augdome property is currently under a four-year option to Newmont. 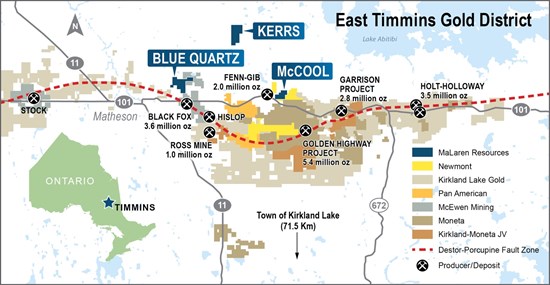 This news release is not for distribution in the United States.

Certain statements contained in this news release constitute "forward looking statements". When used in this document, the words "anticipated", "expect", "estimated", "forecast", "planned", and similar expressions are intended to identify forward looking statements or information. These statements are based on current expectations of management; however, they are subject to known and unknown risks, uncertainties and other factors that may cause actual results to differ materially from the forward-looking statements in this news release. Readers are cautioned not to place undue reliance on these statements. McLaren Resources Inc. does not undertake any obligation to revise or update any forward-looking statements as a result of new information, future events or otherwise after the date hereof, except as required by securities laws.

To view the source version of this press release, please visit https://www.newsfilecorp.com/release/74507

Sign up to receive news releases by email for McLaren Resources Inc. or all companies belonging to the Mining and Metals, Precious Metals industries.