Vancouver, British Columbia--(Newsfile Corp. - September 21, 2020) - Golden Goliath Resources Ltd. (TSXV: GNG ) (OTC Pink: GGTHF) (FSE: GGZ) ("Golden Goliath" or the "Company") is very pleased to announce that the diamond drilling program on its Kwai property in the Red Lake Mining District is progressing well and the Company is extremely pleased with the initial core that is being logged. The program is designed to test the Pakwash Break along 10 kilometers of strike length with approximately 40 holes totaling 6,000 meters. Although the main focus of the drilling is aimed at the Pakwash Fault and associated deformation zones, a number of other splay faults and parallel IP trends will also be tested.

The drilling was planned to start in the NE corner of the West Grid where there are several high priority targets with very strong IP anomalies and numerous till samples with pristine gold grains. However, heavy rain just before mobilization resulted in local flooding and the order of drilling had to be changed due to access difficulties. Therefore, drilling started on the west side of the grid, close to the main access road, with holes K20-01, 02 and 03. (See Figure 2) The west side anomalies were to be drilled later in the program after completing the holes the company will be drilling in the NE area of the grid later this week. Previous till sampling on lines 0+00 and 200E and 400E yielded pristine gold grains in the vicinity of the stronger IP anomalies, making those areas of higher priority. Fortunately the first holes yielded very valuable information. 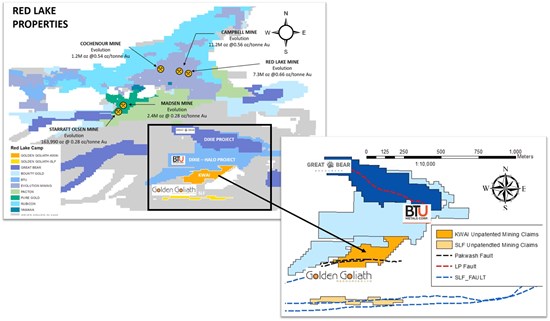 Drilling started with hole K20-01, collared at 800W, 800N and drilled to the south at - 50 degrees to the final depth of 141 meters. This initial hole discovered a large quartz eye porphyry body, with robins egg blue quartz eyes, within the Pakwash main break. Shear zones within this porphyry control numerous quartz veins with fine grained pyrite along the walls of the veins. Fine grained pyrite occurs in the porphyry matrix. Tourmaline is also present. This type of intrusion is often associated with gold deposits in the area and in other gold camps.

In addition, shear zones on the margin of the porphyry contain disseminated sulphides and quartz veining containing sulphides. Therefore it is expected that the rest of the IP trend extending to line 600E from 800W will contain sulphide zones associated with this major structure, a distance of 1600m or one mile.

The second hole (K20-02) was completed on 800W, 600N drilled northward towards hole K20-01 in a scissor like fashion and intersected porphyry from 57.45m to 243m with occasional pegmatite dikes and also hit the mineralized section seen in hole 01 giving for the first time a section of the Pakwash Fault area.

Hole K20-02 begins in highly metamorphosed rocks that were once tuffaceous sediments and are now biotite quartz schists with thin layers of felsic tuffs like those seen on the shoreline of Beauregard Lake, but as the hole progressed north it passed into less altered tuffs and quartz eye porphyry. Sulphides are present, including chalcopyrite. Therefore a section of the English River Sub Province and Uchi Sub Province has been found with Uchi being the belt hosting the Red Lake Gold Camp. Management is excited to have the IP anomaly confirmed as shears with sulphides which are a typical host for gold mineralization, and in a major fault structure related to the other controlling structures in the Red Lake Camp.

While access to the east side was being improved, a third hole (K20-03) was drilled 200m east of hole K20-02 on 600W to test the continuation of the porphyry system (Figure 2). Hole K20-03 encountered again a highly metamorphosed section of tuffaceous sediment with pegmatites and many remobilized quartz veins containing pyrite and tourmaline and sericite-biotite mica. Then the hole entered the quartz eye porphyry at 161.1m and cut a wide zone with disseminated sulphides similar to hole K20-02, however the amount of fine grained pyrite was increasing and is associated with silicified zones that appear like bedding due to the intense shearing. These units are fine grained, grey siliceous altered zones with porphyry along the margins and require further examination. Hole K20-03 contained over 100m of porphyry, and ended at 260m near the north granite contact. Hence a complete cross section of the Pakwash Fault and Sub Province boundaries has been intersected. 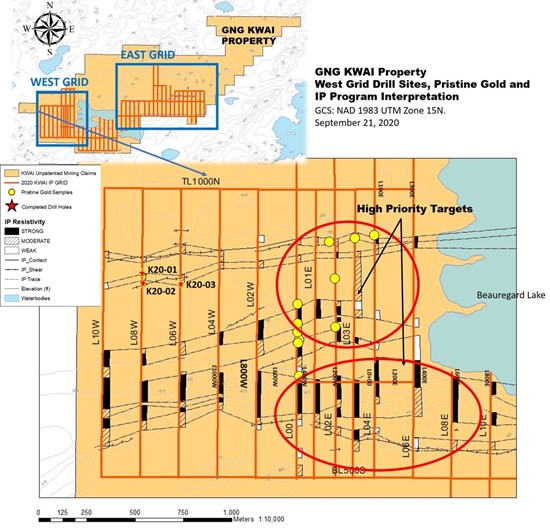 Golden Goliath CEO, Paul Sorbara, comments: "I am extremely happy with the core from Holes K20-1, 2 & 3. These holes are located west of the area where we did the till sampling and they were lower priority targets, but they look very encouraging and contain important lithologies, alteration and visual mineralization. Given what we see here I would expect the high priority targets that we will drill next will bring even better news. Analyses are pending, but given what we have seen in the core, I can hardly wait to see what we hit next in the large, high priority area. I am heading there to see for myself."

"Three additional till samples were taken in late August to be checked for gold grains by Overburden Drilling Management in Ottawa. One of the till samples appeared to be rusty, which could signify a nearby sulphide source. We still do not have the results for them, but they were not taken on the West Grid. They were taken south of Beauregard Lake, between the East and West Grids. Drilling in that area is planned after the West Grid."

This news release has been reviewed by Robert S. Middleton P.Eng who is acting as QP for this phase of the exploration under the NI43-101 requirements.

Golden Goliath Resources Ltd. is a junior exploration company listed on the TSX Venture Exchange (symbol GNG). The Company is focused on exploring and developing the gold and silver potential of properties in the Red Lake District of Ontario. The Company also holds a 100% interest in the San Timoteo property, located in the Sierra Madre Occidental Mountains of northwestern Mexico, as well as NSR royalties on several other nearby properties.

To find out more about Golden Goliath visit our website at www.goldengoliath.com.

To view the source version of this press release, please visit https://www.newsfilecorp.com/release/64220

Sign up to receive news releases by email for Golden Goliath Resources Ltd. or all companies belonging to the Mining and Metals industry.