Vancouver, British Columbia--(Newsfile Corp. - September 2, 2020) - Crest Resources Inc. (CSE: CRES) ("Crest" or the "Company") is pleased to announce that its founding investment in Exploits Gold Corp. ("Exploits") will be exchanged for 5,000,000 common shares of Mariner Resources Corp. ("Mariner", CSE: RNR) on a one-for-one basis, following Mariner's acquisition of 100% interest in Exploits Gold Corp. Crest is the largest shareholder in Mariner, who has now become the largest mineral landholder in Newfoundland.

President and CEO Michael Collins comments, "Crest has been working with a top notch team of local geologists and prospectors to assemble the Exploits Gold projects. We are pleased to see the project going public with Mariner whose Newfoundland assets complement those of Exploits. We expect that 2020-21 will be a busy and exciting time of discovery in the Exploits Subzone".

On the close of this transaction, Mariner will control a strategic land position in the Exploits Subzone, with its core mineral land holdings predating the 2019 New Found Gold Corp. discovery. The two projects held by Exploits are known as the Mt. Peyton and Jonathan's Pond gold projects. The Mt. Peyton and Jonathan's Pond properties are located two and twenty-five kilometers west and northeast respectively of New Found Gold's Queensway Discovery. Both projects are easily accessible via the Trans Canada Highway and together consist of 939 mineral claims encompassing a land area totalling 234.75 km² in the Exploits Subzone Camp.

Mariner believes the Exploits Subzone, which runs 200 km from Dog Bay southwest to Bay d'Espoir, has been neglected since the last major exploration campaigns in the 1980's. Over the last 40 years there have been incremental advancements in the understanding of gold mineralization in the camp. The sum of this knowledge is now coming together in a cohesive and effective exploration model which the Company believes will drive a major discovery. Mariner intends to leverage this shift in understanding and become one of the most extensive explorers in the Exploits Subzone. 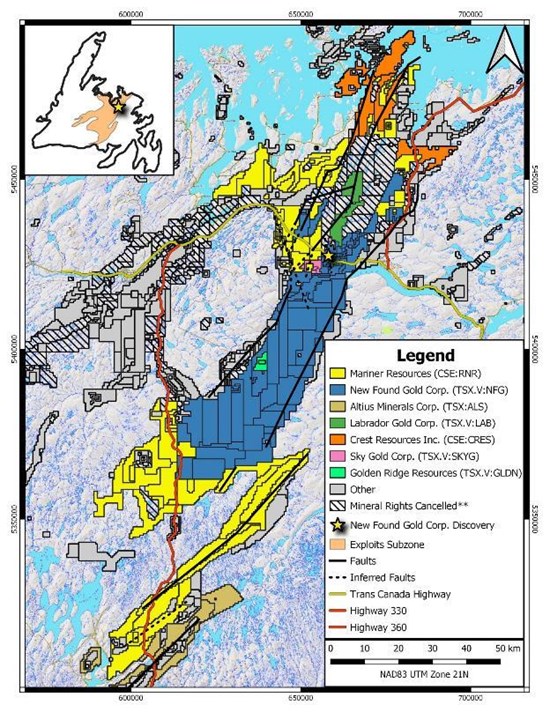 The sale by Crest of its shares in Exploits to Mariner will be a "related party transaction" as defined in MI 61-101. Crest and Mariner are relying on exemptions to the valuation and shareholders' approval requirements under sections 5.5(b) and 5.7(1)(a) of MI 61-101.

The Company has entered into a strategic consulting, management and operations agreement with Exploits to provide such services to Exploits for consideration of $25,000 per month effective July 1, 2020 for a three year term.

Samples taken by Exploits Gold Corp. in 2020 were catalogued, prepared for shipment and analytical submission by a qualified field team. Each sample was placed in a 6-mil polyethylene bag with a Tyvek® identification tag and an additional identification tag written on orange flagging tape in permanent marker. All bags were sealed with electrical tape and the sample identification written on the bag's exterior in permanent marker before samples were taken to Eastern Analytical Ltd. of Springdale Newfoundland and were analysed using Au (Fire Assay) @ 30g + ICP-34.

The technical portion of this news release has been reviewed and approved by Mr. Nicholas Rodway, P.Geo., VP Corporate Development and a shareholder of Crest, a qualified person as defined under National Instrument 43-101.

For more information about the proposed transactions, refer to the news release of Mariner Resources Corp. dated September 2, 2020.

Mariner Resources Corp. is a Canadian mineral exploration company focused on the acquisition and development of mineral projects in Newfoundland, Canada. On the close of this transaction the Company will hold the Middle Ridge, True Grit, Great Bend, Mt. Peyton, Jonathan's Pond, and Gazeebow projects, which cumulatively cover an area of 1,760 km². All projects within Mariner's portfolio lie within the Exploits Subzone and Gander River Ultramafic Belt (GRUB) of the Dunnage Zone, which contain the majority of Newfoundland's gold mineral occurrences and exploration efforts, including New Found Gold's 2019 discovery of 92.86 g/t Au over 19.0 meters near surface. The Exploits Subzone and GRUB regions have been the focus of major staking and financing throughout 2020, with increased exploration activities forecasted in the area moving into 2021.

Crest Resources Inc. is a British Columbia company listed on the Canadian Securities Exchange under the symbol "CRES". The Company's principal business activity is the acquisition, exploration and evaluation of mineral property assets in Canada, Australia and Peru and the investment in mineral exploration companies and related mining technologies of merit. Crest is committed to creating significant shareholder value through advancing a high-quality blended portfolio of resource development and discrete technology plays that build on corporate knowledge and relationships and drive value outside of the mining cycle, as well as direct investment in undervalued exploration plays at an early stage.

To view the source version of this press release, please visit https://www.newsfilecorp.com/release/63075

Sign up to receive news releases by email for Crest Resources Inc. or all companies belonging to the Mining and Metals industry.