President and CEO Derrick Weyrauch commented, "Murtolampi is a short distance north of the Kaukua Open Pit Deposit. We have now shown that both Murtolampi and Kaukua South have the potential to significantly add to the existing NI 43-101 open pit resource at Kaukua. Similar to Kaukua South, Murtolampi is associated with a strong Induced Polarization ("IP") chargeability anomaly that is not fully tested. IP has proven to be an invaluable tool for outlining palladium-rich sulphide mineralization on the LK project, as evidenced by the success of Hole LK20-006 at Kaukua South. The current drill program will continue to test both the Murtolampi and the Kaukua South IP chargeability anomalies discovered earlier this year. We look forward to sharing further drill results with our shareholders in the near term." 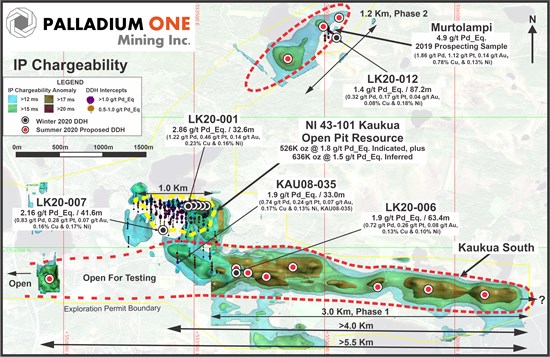 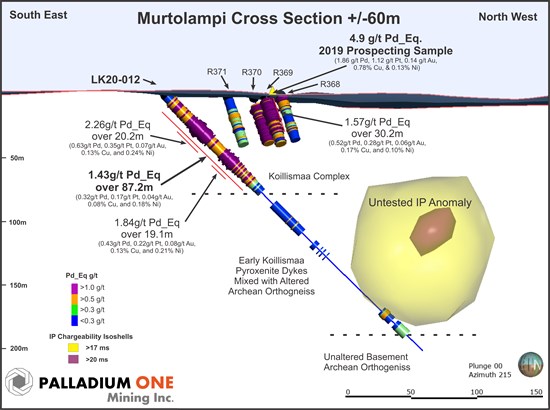 Palladium One Mining Inc. is a palladium dominant, platinum-group-elements ("PGE"), copper, nickel exploration and development company. Its assets consist of the Läntinen Koillismaa ("LK") and Kostonjarvi ("KS") PGE-Cu-Ni projects, located in north-central Finland and the Tyko Ni-Cu-PGE and Disraeli PGE-Ni-Cu properties in Ontario, Canada. All projects are 100% owned and are of a district scale. LK is an advanced project targeting disseminated sulphide along 38 kilometers of favorable basal contact. The KS project is targeting massive sulphide within a 20,000-hectare land package covering a regional scale gravity and magnetic geophysical anomaly. Tyko is a 13,000-hectare project targeting disseminated and massive sulphide in a highly metamorphosed Archean terrain. Disraeli is a 3,100-hectare project targeting PGE-rich disseminated and massive sulphide in a highly productive Proterozoic mid-continent rift.

To view the source version of this press release, please visit https://www.newsfilecorp.com/release/62438