The Company will be conducting ground and airborne geophysical surveys to determine the scale of alteration and to develop potential drill targets for follow-up work next month. In addition to geophysical surveys, Falcon has also implemented a property wide systematic soil and rock sampling program to identify pathfinder elements to complement geophysical targeting of potential mineralization. The program will provide greater insight into the relative position of the Spitfire-Sunny Boy claims in the hydrothermal system which on initial field observations appears to be in the uppermost (distal) part of the system similar to larger deposits in the region such as Westhaven Gold Corp's discoveries in the Spences Bridge Gold Belt (SBGB).

To view an enhanced version of Table 1, please visit:
https://orders.newsfilecorp.com/files/4151/62002_falconehanced.jpg

Falcon's Chief Executive Officer, Karim Rayani commented, "We are greatly excited to see the project grow from an underexplored volcanic terrain in which only high-grade gold was exploited at surface into a potential large scale precious and base metal bearing discovery. We believe the types and high grades of the Spitfire-Sunny Boy zones conform to a low sulphidation epithermal deposit model that could host world-class mining intercepts. We are taking the necessary steps to completely understand the area and our geological team has been working diligently to fully understand the discovery and provide reliable targets for drilling this year." 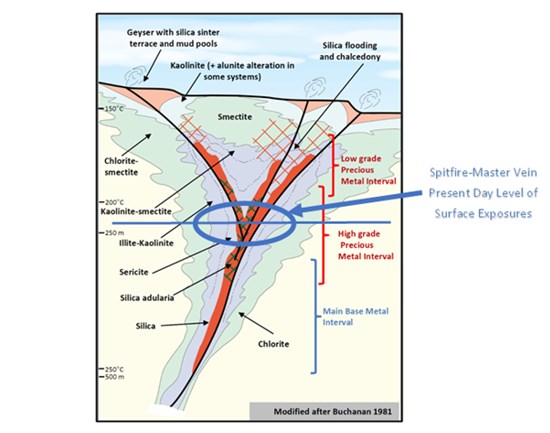 Figure to show low-sulphidation epithermal model and the interpreted level or depth of exposure for the Spitfire-Sunny Boy property and its gold and copper-silver mineralized zones.

The first recorded discoveries were made on the Spitfire-Sunny Boy claims in 1908, which is currently located in the north east portion of the property claim block. Most of the early exploration focused on quartz veins that hosted gold, copper and silver. High grade gold values have been reported at 124 to 127 g/t Au and 309 to 514 g/t silver ("Ag") in quartz vein material from underground workings by Quilchena Mining and Development Company Ltd. The high-grade veins have been trenched, pitted, blasted, and drilled but have never been commercially mined. The main showing, Master Vein, boasts high-grade gold mineralization up to 50.53 oz/t as sampled by Ken Sanders, P. Eng in 1974. To the south-west of the Sunny Boy Zone in an area referred to as the "AL" showing soil geochemistry, geophysics (magnetometer/VLF), trenching, sampling and diamond drilling have been performed on the mineralized veins. The best drill result was reportedly 3.77 g/t Au, 0.24 % copper, and 32.9 g/t Ag over 13.4 meters.

The Spitfire-Sunny Boy discovery is referred to as an epithermal gold deposit by past operators. The gold zones occur within the Quesnellia terrane, characterized by submarine volcanic and volcaniclastic rocks of the Nicola group to the south and the Takla group in the north. The gold mineralization and geological setting of the project bear strong similarities to other developed projects in the region such as the epithermal gold deposits, Prospect Valley and Shovelnose, currently being explored by Westhaven Ventures Inc.

Falcon's due-diligence work in 2019 confirmed the presence of gold mineralization along the Master Vein over a 300-meter strike length with samples ranging from 0.33 to 2.74 ounces per ton ("oz/t") Au. Based on the sporadic past exploration, the Company has identified EM and IP geophysics, structural mapping, and excavating large surface blast pits to expose insitu bedrock as the best approach for identifying new mineralized structures for both gold and base metals discoveries.

Mr. Rayani also stated, "As I have already discussed, our team is watching and noting the successes of larger companies and the techniques used to delineate high-grade gold mineralization within the rapidly developing Merritt, BC gold district. Falcon's team is building on its own findings and is certain that our next steps will guide us to a knowledge-based discovery of note. Each step of the field work is confirming our belief in ultimate worth of the Spitfire-Sunny Boy property."

The technical content of this news release has been reviewed and approved by Mr. Alex Pleson, P.Geo., who is a Qualified Person as defined by National Instrument 43-101, Standards of Disclosure for Mineral Projects.

About Falcon Gold Corp. & the Central Canada Gold Mine Project

Falcon is a Canadian mineral exploration company focused on generating, acquiring, and exploring opportunities in the Americas. Falcon's flagship project, the Central Canada Gold Mine, is approximately 20 km south east of Agnico Eagle's Hammond Reef Gold Deposit which has Measured & Indicated estimated resources of 208 million tonnes containing 4.5 million ounces of gold. The Hammond Reef gold property lies on the Hammond fault which is a splay off of the Quetico Fault Zone ("QFZ") and may be the control for the gold deposit. The Central Gold property lies on a similar major splay of the QFZ.

The Company also holds 3 additional projects. The Camping Lake Gold property in the world-renowned Red Lake mining camp, a 49% interest in the Burton Gold property with Iamgold near Sudbury Ontario, and the Spitfire-Sunny Boy Gold Claims near Merritt, B.C.

This news release may contain forward looking statements including but not limited to comments regarding the timing and content of upcoming work programs, geological interpretations, receipt of property titles, etc. Forward looking statements address future events and conditions and therefore, involve inherent risks and uncertainties. Actual results may differ materially from those currently anticipated in such statements.

To view the source version of this press release, please visit https://www.newsfilecorp.com/release/62002

Sign up to receive news releases by email for Falcon Gold Corp. or all companies belonging to the Mining and Metals, Precious Metals industries.