Vancouver, British Columbia--(Newsfile Corp. - August 13, 2020) - FALCON GOLD CORP. (TSXV: FG) (FSE: 3FA) (OTC Pink: FGLDF); ("Falcon" or the "Company") is pleased to announce it has received fire assay results and certain check assays for its second diamond drill hole, CC20-02, from its Central Canada Gold Mine project, near Atikokan in north-western Ontario. This hole and the previously announced CC20-01 were drilled east of the historic mine shaft with the second hole confirming the high-grade mine trend for approximately 75 m of strike to west-southwest. In addition, this second hole, CC20-02, is the first of the seven holes completed for the 2020 summer program to report visible gold within a mineralized intersection.

The presence of visible gold within mineralized drill core may be common for such high-grade zones as at the Central Canada project. However, the "nugget-affect" can often cause difficulties for assayers to accurately determine the grade of mineralization. As experienced by Falcon's results, the company has assays and check assays that have varied by as much as 320%. Two of the highly variable gold grades determined within the hole CC20-02, are included in the table of results, below. The average grade for the varied results was calculated and used for the weighted average grade for the zone. It is important to note that the initial assays and the check assays were conducted independently at different laboratories, each of which is an accredited assayer.

Note: Lengths of interesections may not represent the true widths of the gold zones. The Company has not yet accurately determined the dip of the zone.

Falcon's Chief Executive Officer, Karim Rayani commented, "These commanding results from the Central Canada mine's main trend have given our Company another boost in confidence. The mine's historical gold zone was reported to be a narrow, high-grade quartz vein and our first two drill holes support the historical reports. Our geological team believes we are seeing definite confirmation that the zones are present and very importantly, the zones are contained within gold mineralized halos that may be several meters thick. In my opinion, these high-grade veins and attendant gold-mineralized halos give us a previously unidentified exploration target with much greater economic potential."

A surface plan of the relative locations & attitudes of the seven (7) diamond drill holes completed at the Central Canada Gold Mine near Atikokan in northwestern Ontario during the summer of 2020. 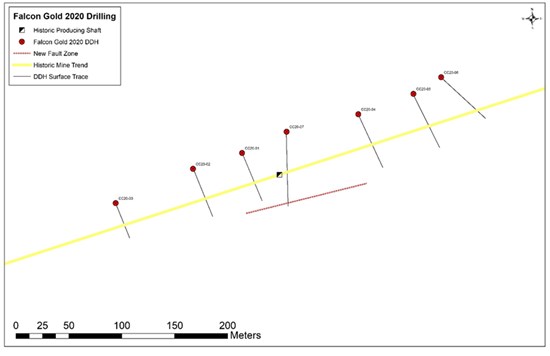 The technical content of this news release has been reviewed and approved by Mr. Alex Pleson, P.Geo., who is a Qualified Person as defined by National Instrument 43-101, Standards of Disclosure for Mineral Projects.

About Falcon Gold Corp. & the Central Canada Gold Mine Project

Falcon is a Canadian mineral exploration company focused on generating, acquiring, and exploring opportunities in the Americas. Falcon's flagship project, the Central Canada Gold Mine, is approximately 20 km south east of Agnico Eagle's Hammond Reef Gold Deposit which has Measured & Indicated estimated resources of 208 million tonnes containing 4.5 million ounces of gold. The Hammond Reef gold property lies on the Hammond fault which is a splay off of the Quetico Fault Zone ("QFZ") and may be the control for the gold deposit. The Central Gold property lies on a similar major splay of the QFZ.

The Company also holds 3 additional projects. The Camping Lake Gold property in the world-renowned Red Lake mining camp, a 49% interest in the Burton Gold property with Iamgold near Sudbury Ontario, and the Spitfire and Sunny Boy Gold Claims near Merritt, B.C.

This news release may contain forward-looking statements including but not limited to comments regarding the timing and content of upcoming work programs, geological interpretations, receipt of property titles, etc. Forward-looking statements address future events and conditions and therefore, involve inherent risks and uncertainties. Actual results may differ materially from those currently anticipated in such statements.

To view the source version of this press release, please visit https://www.newsfilecorp.com/release/61665

Sign up to receive news releases by email for Falcon Gold Corp. or all companies belonging to the Mining and Metals, Precious Metals industries.