Sydney, Australia--(Newsfile Corp. - April 1, 2020) - Austral Gold Limited ("Austral") (ASX: AGD) (TSXV: AGLD) and New Dimension Resources Ltd. (TSXV: NDR) ("New Dimension") are pleased to announce that they have entered into an agreement for Austral to purchase an 80% interest in New Dimension's Sierra Blanca gold-silver project (the "Project") in Santa Cruz Province, Argentina for US$800,000 in cash and work commitments, with a 'follow-on' option to purchase the remaining 20% interest for an additional US$2,300,000 in cash and work commitments as detailed below (the "Transaction"). The Transaction is subject to the successful completion of due diligence, execution of a definitive agreement and certain undertakings from New Dimension, and is expected to close on, or before, 30 April 2020.

With this transaction, Austral will expand the area of its Pingüino project by securing an additional 7,000 hectares, resulting in a new exploration cluster in the Province of Santa Cruz. 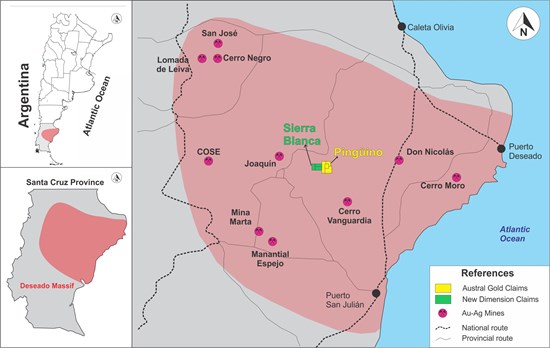 Highlights of the transaction:

Austral has agreed to purchase the first 80% interest in the New Dimension Argentine subsidiary that owns the Sierra Blanca project in two tranches through a combination of cash payments and project-level work commitments as follows:

Austral has also agreed to pay up to US$10,000 per year towards the cost of maintaining the Sierra Blanca mining properties in good standing over the three-year term.

Austral plans to fund the cost of the transaction from cash flow generated from operations.

After it has acquired its 80% interest in the project, Austral will have the option to acquire the remaining 20% as follows:

The parties expect to close the Transaction on or before 30 April 2020, subject to both the successful completion of due diligence by Austral and the finalisation of options to purchase one-half of the existing net smelter royalties at Sierra Blanca.

Austral Gold's Chief Executive Officer, Stabro Kasaneva said: "We are pleased to have this opportunity to acquire the Sierra Blanca gold-silver project. We see strong synergies between the Sierra Blanca project and our Pingüino project. Both projects are located in the geological zone of Deseado Massif in the Santa Cruz Province , one of the most prominent precious metal regions in the world, including world-class deposits, such as Cerro Vanguardia and Cerro Negro1. We expect that the acquisition of Sierra Blanca will enable us to increase the value of our Pingüino project by drilling additional targets that can potentially increase our mineral resource base in this region."

Eric Roth, New Dimension's CEO, commented today: "We are pleased to be announcing today the sale of our Sierra Blanca gold-silver project to Austral. Austral has significant mine operating and exploration experience in both Chile and Argentina and are natural acquirers of Sierra Blanca given their ownership of the adjacent, resource-stage Pingüino project. Indeed, many of the known gold-silver veins at Sierra Blanca extend in to the adjacent Pingüino concessions so combining ownership of the two projects makes strategic sense for both parties. The sale of Sierra Blanca to Austral will also allow the Company to continue its evaluation of new project opportunities both within the Americas and favourable jurisdictions elsewhere".

About the Sierra Blanca project:

New Dimension acquired a 100% interest in the Sierra Blanca gold-silver project from Sandstorm Gold Limited ("Sandstorm") in May, 2018, as part of the acquisition of a larger portfolio of three gold-silver projects - Las Calandrias, Los Cisnes, and Sierra Blanca - all located in the highly-prospective and mining-friendly Santa Cruz Province. The Sierra Blanca project was previously controlled by Mariana Resources Limited ("Mariana') and consists of approximately 7,000 Ha (70 square kilometres) of mining claims.

Previous work at Sierra Blanca had mostly been focused on the E-W-trending Chala-Achen and Lucila vein systems, where high-grade silver values had been derived from surface channel sampling (including 9.4m @ 2,362 g/t Ag at Chala-Achen; see New Dimension News Release dated 4 March 2019 (Figures 2 and 3). During 2019, exploration activities at Sierra Blanca were focused on trenching and sampling on the NW-trenching Ana (and Ana Splay), Tranquilo, and Laguna "vein fields" with targets for follow-up drilling having been defined. A total of 10 target areas have been identified for further work at Sierra Blanca (typically dilation zones associated with the intersection of mineralized NE- and NW-trending vein/fault systems), and only 4 of these have been partially tested by historical drilling (a total of 122 holes for 15,924 m, completed mostly in the Chala-Achen-Lucila corridor). All of the major vein systems known in the eastern portion of the Sierra Blanca are interpreted by New Dimension to extend into the adjacent Pingüino property.

About the Pingüino project

The Silver-Gold-Zinc-Lead-Indium Pingüino Project is an advanced stage development project located in the south-central part of Argentina; 300km southwest of the city of Comodoro Rivadavia and 220km northwest of Puerto San Julián. In the last 15 years, six mines were constructed in the Santa Cruz Province, making it one of the most prominent precious metal regions in the world, including world class deposits such as Cerro Vanguardia and Cerro Negro1. The Pingüino Project is embedded in a vein field similar, but smaller to Cerro Vanguardia, some 35km north-west along the same controlling structure as the Pingüino deposit (225km strike length of veins vs 115 km strike length of veins). The project has year-round access, is close to major infrastructure, has no nearby communities and more than 70% of surface land is owned by the Austral.

The 2014 updated Resource Estimate Highlights include:

Zn, Pb and In are not included in the resource for Ag equivalent

The technical information in this news release relating to the Sierra Blanca project has been prepared in accordance with Canadian regulatory requirements set out in NI 43-101, and approved by Eric Roth, New Dimension's President & CEO, a director and a Qualified Person under NI 43-101. Mr. Roth holds a Ph.D. in Economic Geology from the University of Western Australia, is a Fellow of the Australian Institute of Mining and Metallurgy (AusIMM), and is a Fellow of the Society of Economic Geologists (SEG). Mr. Roth has more than 25 years of experience in international minerals exploration and mining project evaluation.

The technical information in this news release relating to the Pingüino project has been approved by Dr Robert Trzebski, a Competent Person and a Qualified Person under NI 43-101 who is a fellow of the Australian Institute of Mining and Metallurgy (AUSIMM) and an Independent Director of Austral Gold.

Austral Gold Limited is a growing precious metals mining, development and exploration company building a portfolio of quality assets in Chile and in Argentina. Austral's flagship Guanaco/Amancaya project in Chile is a gold and silver producing mine with further exploration upside. Austral also holds the Casposo Mine (San Juan, Argentina), a ~23.62% interest in the Rawhide Mine (Nevada, USA) and an attractive portfolio of exploration projects including the Pingüino project in Santa Cruz, Argentina (100% interest) and the San Guillermo and Reprado projects near Amancaya, Chile (100% interest). With an experienced local technical team and highly regarded major shareholder, Austral's goal is to continue to strengthen its asset base through acquisition and discovery. Austral is listed on the TSX Venture Exchange (TSXV: AGLD), and the Australian Securities Exchange. (ASX: AGD). For more information, please consult Austral's website www.australgold.com.

New Dimension is engaged in the acquisition, exploration, and development of quality mineral resource properties throughout the Americas and in other favourable jurisdictions, with a focus on high-grade precious and base metals deposits. New Dimension's current focus is on the discovery of high-grade gold resources at the drill-ready and 100%-owned Savant Lake project in Ontario, in addition to working with Project Operator Yamana Gold on advancing the Domain Joint Venture in Manitoba (NDR 29.6% interest). New Dimension also continues to evaluate strategic alternatives for its 100%-owned Las Calandrias and Los Cisnes projects in the highly prospective Deseado Massif of Santa Cruz Province, southern Argentina.

Statements in this news release that are not historical facts are forward-looking statements. Forward-looking statements are statements that are not historical, and consist primarily of projections - statements regarding future plans, expectations and developments. Words such as "expects", "intends", "plans", "may", "could", "potential", "should", "anticipates", "likely", "believes" and words of similar import tend to identify forward-looking statements. Forward-looking statements in this news release include the parties' expectation that they will be able to conclude the Transaction, and the expectation that they will be able to do so by the end of April, 2020 and that Austral plans to fund the cost of the transaction from cash flow generated from operations. All of these forward-looking statements are subject to a variety of known and unknown risks, uncertainties and other factors that could cause actual events or results to differ from those expressed or implied, including, without limitation, business integration risks; uncertainty of production, development plans and cost estimates, commodity price fluctuations; political or economic instability and regulatory changes; currency fluctuations, the state of the capital markets especially in light of the effects of the novel coronavirus,, uncertainty in the measurement of mineral reserves and resource estimates, Austral's ability to attract and retain qualified personnel and management, potential labour unrest, reclamation and closure requirements for mineral properties; unpredictable risks and hazards related to the development and operation of a mine or mineral property that are beyond the Company's control, the availability of capital to fund all of the Company's projects and other risks and uncertainties identified under the heading "Risk Factors" in the Company's continuous disclosure documents filed on the ASX and on SEDAR. You are cautioned that the foregoing list is not exhaustive of all factors and assumptions which may have been used. Austral cannot assure you that actual events, performance or results will be consistent with these forward-looking statements, and management's assumptions may prove to be incorrect. Austral's forward-looking statements reflect current expectations regarding future events and operating performance and speak only as of the date hereof and Austral does not assume any obligation to update forward-looking statements if circumstances or management's beliefs, expectations or opinions should change other than as required by applicable law. For the reasons set forth above, you should not place undue reliance on forward-looking statements.

To view the source version of this press release, please visit https://www.newsfilecorp.com/release/54011

Sign up to receive news releases by email for Austral Gold Limited or all companies belonging to the Mining/Metals, Precious Metals industries.