Vancouver, British Columbia--(Newsfile Corp. - February 27, 2020) - Riverside Resources Inc. (TSXV: RRI) (OTCQB: RVSDF) (FSE: R99) ("Riverside" or the "Company"), is pleased to report that the Company has doubled the land tenure at its Oakes Project and provides new exploration results and interpretations from its 100% owned western Ontario gold projects. The Ontario projects located northeast of Thunder Bay to the east of Red Lake and west of Timmins, Ontario are along the major Archean greenstone belt. Riverside recently completed IP inversion studies at the Oakes Project that have defined three strong gold targets expanding upon previous data compilation. Additionally, similar work at the Longrose and Pichette projects have displayed potential with low cost exploration that Riverside will work with partners to make future discoveries.

Riverside's President and CEO, John-Mark Staude, stated: "Riverside is pleased with the new updated processing of IP geophysics along this highly endowed gold greenstone belt that has produced 4.1M[1] ounces of gold historically. Oakes has drill ready targets, Longrose is located adjacent to a near 1M Oz Au past producer also has excellent gold targets, and Pichette has large shear structures that could host new gold discoveries making the portfolio for 2020 which Riverside is delighted to own and move toward partnerships." 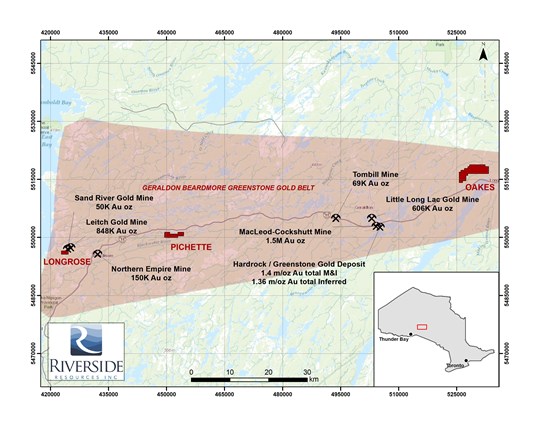 Figure 1: Geraldton Greenstone Belt showing the location of Longrose, Pichette and Oakes projects with past producing mines (4.1M Oz Au in past production)

The Oakes Project is located immediately north of Long Lac, Ontario with excellent infrastructure being located along the Trans-Canada Highway (11) within a favorable mining jurisdiction.

Present work has included reprocessing of the geophysics and integrating drill data from historical work that included two drill campaigns, VLF, Mag and induced polarization (IP) geophysics in addition to a soil chemistry survey and trenching defines high potential near surface drill targets that could be tested in 2020. A past IP (2010) survey followed by a trenching campaign identified three mineralized shears coincident with VLF geophysical anomalies. These shears have recently been defined through Riverside's inversion modeling and GIS data integration creating a new target model (see Figure 2 below).

The new inversion geophysics model demonstrates the potential continuity and potency of the trend which also corresponds to the earlier VLF survey showing a 900 m long chargeability anomaly that aligns with Riverside's surface rock sampling that returned 19.7 g/t, 31.9 g/t and 6.9 g/t gold (see press release July 29, 2019). Riverside's work combined with this geophysical model demonstrates significant continuity over mining lengths and could prove to be much larger in areal extent which has helped to better discriminate the extensions and show the HG, Brinklow and Crib zones and shows that the 3 zones are still open to the east and west. Future work will focus on expanding the target trends. 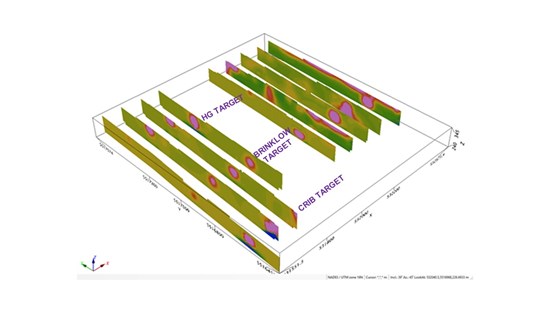 New work by Riverside builds upon the summer's fieldwork season combining the surface geochemistry with structural geology tracing out the known mineralized structures. The main shear zones are associated with anticlinal and synclinal hinges and axial planar. At Longrose and elsewhere the interbeds of banded iron formation provide a reductant trap for ore fluids and gold in structures cutting the banded iron formation. Riverside's mapping at Longrose has now been compiled and integrated into GIS which shows that folding is a key control and provides new well-defined targets for near term drilling. Mineralization on surface is delineated through mapping of isolated locations and tracing through past drilling in the area along with alteration associated with high strain fold zones. These fold zones show silicification within the metasedimentary rock host similar to that found at the Leitch Mine and more generally common in the Greenstone Belts of Ontario.

Integration of historical geophysics indicates a trend of structures subparallel to the strike of geological units generally southwest northeast which fit regional controls in the belt. Geophysical magnetic lows parallel strong magnetic highs which is mapped as the southern iron formation zone and provides a target that can be tracked downward to illuminate folding controls. As well, a north-northwest trending low that intersects the magnetic high of the iron formation and another linear magnetic-low features that extend westward from the Leitch Mine provides another drill target on Longrose. Parts of the Longrose area are covered by swampy topographic lows and are believed to be associated with a recessive shear structure, part of a regional syncline. The drill targets at Longrose focus on the anticlinal hinges, cross structures and larger none mineralized shears.

At Longrose, mineralized shear zones that host gold comprise sulfides and silicification zones that could be readily identified by a modern IP survey. IP geophysics data could be used in conjunction with the regional and detailed magnetic survey to define the four types of conceptual drilling targets developed by Riverside: (1) Strike-slip fault along which right-lateral displacement has disrupted thick iron formation units; inferred fault follows a regional volcanic-sedimentary contact, a prospective conduit for gold mineralization; (2) Trace of axial plane of westward-closing fold; possible site of shear fault that could host high-grade Au-quartz veining; (3) Trace of inferred shear structure that has evidently caused asymmetric 'drag-fold' defined by iron formation; and (4) Trace of possible shear structure denoted by 'kink' fold in iron formation (see Figure 3, below).

Figure 3: Cross section of the Longrose Project showing historical drilling and the primary target area, which is a large anticline that trends through the middle of the Project

Recent work by Riverside refined two previously identified areas of mineralization in addition to several new mineralized exposures (see Figure 4 below). Mineralization at Pichette is noted within and along the contact with metasedimentary rocks and also associated with banded iron formation. There are two predominant target orientations on the project: (1) east-west shears commonly related to banded iron formation and contact zones; and (2) cross-cutting faults and/or dikes that strikes at 030 degrees northeast. There are several 3m wide shear zones defined by strongly foliated (phyllitic) material which does not appear to have been subject to past exploration. At Pichette, as at Longrose and the Hard Rock deposit in Geraldton to the east, gold is typically associated with larger folds. Folds at Pichette plunge gently to the west similar to mineralization in Geraldton. This similar structural setting at Pichette makes this target modelling a good analog for future exploration. 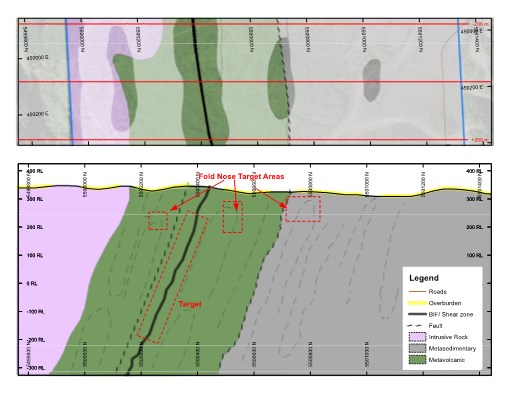 Disclosure Note: Mineralization, resource and/or reserves hosted on adjacent and/or nearby properties is not necessarily indicative of mineralization that may be hosted on the Company's property.

The scientific and technical data contained in this news release pertaining to the Ontario Projects was reviewed and approved by Freeman Smith, P.Geo, a non-independent qualified person to Riverside Resources, who is responsible for ensuring that the geologic information provided in this news release is accurate and who acts as a "qualified person" under National Instrument 43-101 Standards of Disclosure for Mineral Projects.

All of Riverside's rock samples were processed in Thunder Bay, Ontario at AGAT Labs where gold content was determined by fire assay with atomic adsorption finish and ICP-mass spectrometry for 32 other elements. Regarding previous historical operators work on the Projects. The reliability of historical data is uncertain but is considered to be relevant by Company management; however, there is a risk that the Company's confirmation work or future drill testing may produce results that substantially differ from the historical results.

Riverside is a well-funded exploration company driven by value generation and discovery. The Company has no debt and 63M shares outstanding with a strong portfolio of gold-silver and copper assets in North America. Riverside has extensive experience and knowledge operating in Canada and Mexico and leverages its large database to generate a portfolio of prospective mineral properties. In addition to Riverside's own exploration spending, the Company also strives to diversify risk by securing joint-venture and spin-out partnerships to advance multiple assets simultaneously and create more chances for discovery. Riverside has additional properties available for option, with more information available on the Company's website at www.rivres.com.

To view the source version of this press release, please visit https://www.newsfilecorp.com/release/52893