Tiria Moves up the List of Aurania's Gold-Silver Target Ranking

Toronto, Ontario--(Newsfile Corp. - February 5, 2020) -  Aurania Resources Ltd. (TSXV: ARU) (OTCQB: AUIAF) (FSE: 20Q) ("Aurania" or the "Company") reports that soil sampling has defined compelling epithermal-style targets in the Tiria area of the Company's Lost Cities - Cutucu Project ("Project") in southeastern Ecuador. Tiria has moved up the list of epithermal gold-silver targets ranked for drilling, ahead of the Apai target and the Company has applied for the required water permit.

Pathfinder elements for epithermal gold-silver mineralization at Tiria are concentrated in four areas that partially enclose a core of silver-zinc-lead mineralization evident over a 13km trend. A maximum grade of 710g/t silver and 48% zinc was obtained from a rock-chip sample 0.5m long in the core area (press releases dated November 29, 2018 and September 9, 2019).

Dr. Jeffrey Hedenquist, a consultant with global experience and expertise in epithermal and porphyry systems, visited the Project in early December 2019 and was impressed by the systematic arrangement of the epithermal pathfinder elements around the elongate central, carbonate-hosted area that contains silver-zinc-lead. He highlighted similarities with the deposits in the Cerro de Pasco - Colquijirca district in adjacent Peru and recommended that the targets be advanced as a priority. In addition, field evidence reviewed by Dr. Hedenquist suggests that the level of erosion at Tiria is deeper, and therefore closer to the gold-bearing zone of a typical epithermal system, than at Crunchy Hill and Yawi, which both have features that indicate the preservation of the paleosurface (Figure 1).

Details of the Tiria Targets
The interpreted location of the Tiria targets are illustrated in a generalized model of epithermal systems in Figure 1. Their main characteristics are as follows: 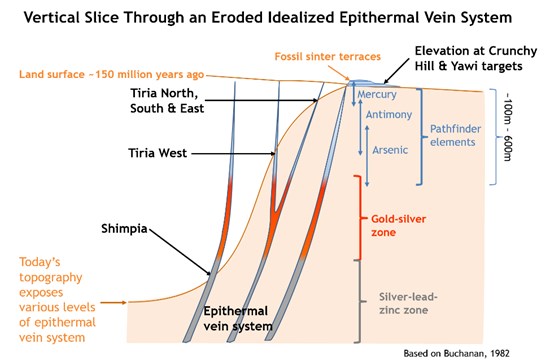 Figure 1. Cross section through an idealized low or intermediate sulphidation epithermal vein system showing the interpreted location of the Tiria and Shimpia targets based on the composition of the pathfinder element suite.

Next Steps
Grid soil sampling has proved to be a highly effective way of defining targets in the Tiria-Shimpia system and is being undertaken by local technicians while the Company's geological team-leaders map the target areas and determine the location and shape of the target for drilling. The Company has applied for the water permit required for drilling and the first step of the approval has been granted while the final part is awaited. Management had previously stated that the Company would consider an early joint venture on the silver-lead-zinc target at Shimpia but, given its possible genetic link with the adjacent epithermal pathfinders, this approach is being reconsidered.

Update on Drilling at Yawi
Bore hole YW007, is being drilled from the same platform as YW003 and YW006 were drilled from. The hole is currently at a depth of approximately 364m and is planned to a depth of 400m. 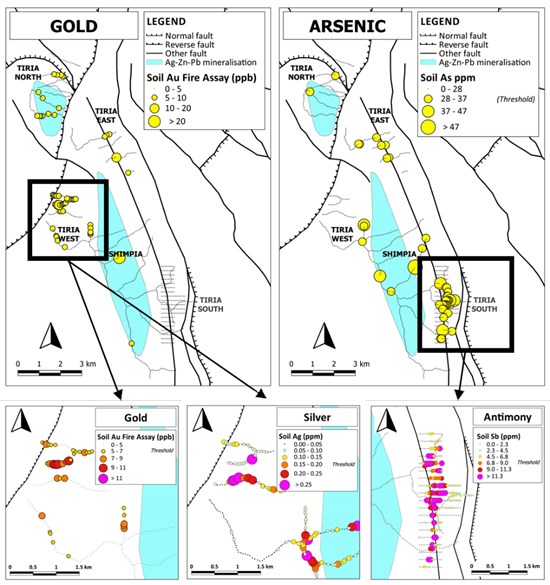 Sample Analysis & Quality Assurance / Quality Control ("QAQC") Laboratories: The soil samples were prepared for analysis at ALS Global's ("ALS") lab in Quito, or at MS Analytical ("MSA") in Cuenca, Ecuador. Analysis by ALS was done in Lima, Peru, and MSA conducted their analyses in Vancouver, Canada.

Sample preparation: Soil samples consisted of approximately one kilogram of clay from the iron-rich "B" horizon at each sample point. The soil samples were dried and subsequently screened through 80 mesh (using screens with apertures of approximately 0.18 millimetres). A 250 gram ("g") split of the material that passed through 80 mesh was pulverized to 85% passing 0.075mm and was packaged for shipment to the analytical facility.

Analytical procedure: A 0.5g split of the -0.075mm fraction of soil samples underwent digestion with aqua regia, and the liquid was analyzed for 48 elements by ICP-MS. Apart from being analyzed by ICP-MS, gold was also analyzed by fire assay with an ICP-AES finish.

QAQC: Aurania personnel inserted a certified standard pulp sample, alternating with a field blank, at approximate 20 sample intervals in all sample batches. Aurania's analysis of results from its independent QAQC samples showed the batches reported on above, lie within acceptable limits. In addition, the labs reported that the analyses had passed their internal QAQC tests.

Qualified Person
The technical information contained in this news release has been verified and approved by Jean-Paul Pallier, MSc. Mr. Pallier is a designated EurGeol by the European Federation of Geologists and a Qualified Person as defined by National Instrument 43-101, Standards of Disclosure for Mineral Projects of the Canadian Securities Administrators.

About Aurania
Aurania is a junior mineral exploration company engaged in the identification, evaluation, acquisition and exploration of mineral property interests, with a focus on precious metals and copper. Its flagship asset, The Lost Cities - Cutucu Project, is located in the Jurassic Metallogenic Belt in the eastern foothills of the Andes mountain range of southeastern Ecuador.

Forward-Looking Statements
This news release may contain forward-looking information that involves substantial known and unknown risks and uncertainties, most of which are beyond the control of Aurania. Forward-looking statements include estimates and statements that describe Aurania's future plans, objectives or goals, including words to the effect that Aurania or its management expects a stated condition or result to occur. Forward-looking statements may be identified by such terms as "believes", "anticipates", "expects", "estimates", "may", "could", "would", "will", or "plan". Since forward-looking statements are based on assumptions and address future events and conditions, by their very nature they involve inherent risks and uncertainties. Although these statements are based on information currently available to Aurania, Aurania provides no assurance that actual results will meet management's expectations. Risks, uncertainties and other factors involved with forward-looking information could cause actual events, results, performance, prospects and opportunities to differ materially from those expressed or implied by such forward-looking information. Forward looking information in this news release includes, but is not limited to, Aurania's objectives, goals or future plans, statements, exploration results, potential mineralization, the corporation's portfolio, treasury, management team and enhanced capital markets profile, the estimation of mineral resources, exploration and mine development plans, timing of the commencement of operations and estimates of market conditions. Factors that could cause actual results to differ materially from such forward-looking information include, but are not limited to, failure to identify mineral resources, failure to convert estimated mineral resources to reserves, the inability to complete a feasibility study which recommends a production decision, the preliminary nature of metallurgical test results, delays in obtaining or failures to obtain required governmental, regulatory, environmental or other project approvals, political risks, inability to fulfill the duty to accommodate indigenous peoples, uncertainties relating to the availability and costs of financing needed in the future, changes in equity markets, inflation, changes in exchange rates, fluctuations in commodity prices, delays in the development of projects, capital and operating costs varying significantly from estimates and the other risks involved in the mineral exploration and development industry, and those risks set out in Aurania's public documents filed on SEDAR. Although Aurania believes that the assumptions and factors used in preparing the forward-looking information in this news release are reasonable, undue reliance should not be placed on such information, which only applies as of the date of this news release, and no assurance can be given that such events will occur in the disclosed time frames or at all. Aurania disclaims any intention or obligation to update or revise any forward-looking information, whether as a result of new information, future events or otherwise, other than as required by law.

To view the source version of this press release, please visit https://www.newsfilecorp.com/release/52110