Jason Gigliotti, President of Sienna states, "We are extremely pleased to be able to acquire a large block of land directly bordering one of the largest palladium deposits in North America. This is an excellent complement to our platinum-palladium-nickel project in Sweden. Platinum and palladium prices have been some of the best performing metal prices recently, especially palladium, which is right near an all-time high. The timing for our new platinum-palladium project acquisition could not be more opportune. We are formulating plans to commence operations as soon as possible on our Marathon North Palladium Project and concurrently expecting to restart drilling in Sweden on our platinum-palladium-nickel Slättberg project. We had positive drilling on the last phase and have used that data to zero in on the best targets. Sienna is partnered with the NYSE's EMX Royalty Corporation (EMX: NYSE) on this project, who are one of the most respected companies in mining. We feel that there is a massive demand and appetite for platinum and palladium assets and Sienna's goal is to be a significant player in this arena in 2020."

Sienna conducted a two-hole drill program in October 2019 at its Slättberg project in southern Sweden. That program targeted two electromagnetic ("EM") anomalies detected by downhole surveys performed at the end of the 2018 drill program. One was detected in the vicinity of drill hole SIE-18-006 located at the west end of the trend of historic nickel mines, and one in the vicinity of drill hole SIE-18-003, near the center of the trend of mineralization (see Fig. 1).

Textures in the sulfide intervals are suggestive of tectonic remobilization of sulfides from a nearby source. Multiple thick mafic dikes were also intercepted in SIE-19-001, which are not seen in surface exposures, nor in the shallow drill holes elsewhere in this area. The abundance of sulfide, higher PGE values, and a swarm of mafic dikes suggest that Sienna is moving closer to a source area for the sulfide mineralization and associated mafic intrusions as it drills to progressively deeper levels in the western target area. 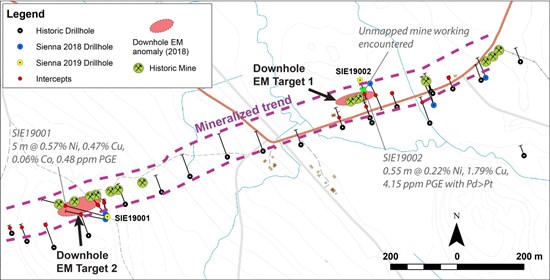 The technical contents of this release were approved by Greg Thomson, PGeo, a qualified person as defined by National Instrument 43-101. These new claims were acquired via staking.

To view the source version of this press release, please visit https://www.newsfilecorp.com/release/51764