Spot price of palladium hits an all-time high of more than US$2,100 an ounce, while the price of rhodium hits a ten-year high of US$8,200 an ounce

Independent feasibility study underway on a smaller-scale, lower-capital-cost mine development plan to accelerate initial production by using Shaft 1 as a production shaft

Platreef's Shaft 1 currently is at a depth of 957 metres below surface. It is scheduled to be completed to a final depth of approximately 1,000 metres by the end of July, 2020. Work on Shaft 1's 950-metre-level station - the shaft's third and final station - is expected to be completed in March, 2020.

Palladium prices continue to surge to record highs, topping US$2,100 an ounce as stricter air-quality rules boost demand for the metal used in vehicle pollution-control devices. Platreef has an estimated 26.8 million ounces of palladium in current Indicated Mineral Resources, and an additional 43.0 million ounces in current Inferred Mineral Resources, at a 2.0 g/t 3PE+gold cut-off.

Rhodium is a rare platinum-group metal that is chemically stable at high temperatures, resistant to corrosion and mainly used with palladium and platinum in the production of automobile catalytic converters that curb harmful emissions. Approximately 80% of the world's rhodium supply comes from mines in South Africa, and global production of rhodium is only approximately one million ounces annually. 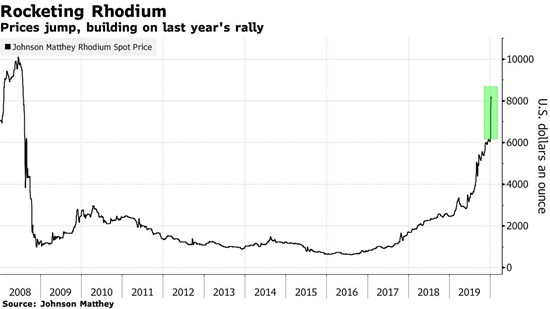 In addition to the surge in the price of rhodium and palladium, recent increases in the price of nickel, copper and gold has resulted in the weighted price of the 'basket' of metals contained in the ore at Platreef to rise to a new, multi-year high.

Figure 3. Revenue per tonne of ore at the Platreef Project has risen steadily since 2016 (shown in US dollars) 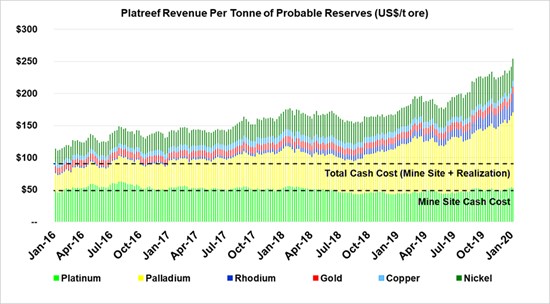 Figure 4. Revenue per tonne of ore at the Platreef Project has risen steadily since 2016 (shown in South African rand) 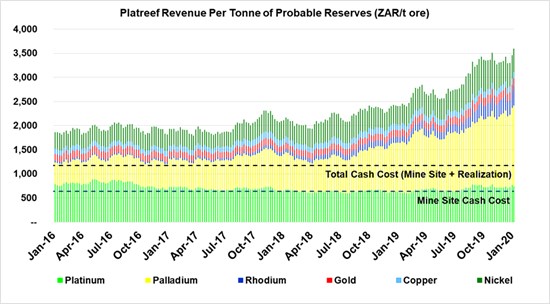 Source for figures 1 & 2: Bloomberg. Based on historical weekly commodity prices at the end of each week.

Since 2007, Ivanhoe has focused its exploration and development activities at Platreef on defining and advancing the underground Flatreef Deposit, which is amenable to highly mechanized, underground mining methods. Flatreef, with a strike length of 6.5 kilometres, lies predominantly within a flat-to gently-dipping portion of the Platreef mineralized belt at relatively shallow depths of approximately 500 metres to 1,350 metres below surface. Flatreef is characterized by its very large vertical thicknesses of high-grade mineralization.

The Platreef Project's current Mineral Resource estimate, which does not include any near-surface mineralization, was prepared for Ivanhoe Mines under the direction of Dr. Harry Parker, RM SME, of Amec Foster Wheeler. Dr. Parker and Timothy Kuhl, RM SME, also of Amec Foster Wheeler, have independently confirmed the Mineral Resource estimate and are the Qualified Persons for the estimate, which has an effective date of April 22, 2016.

Information on Platreef Project geology and mineralization is contained in the Platreef Project National Instrument (NI) 43-101 Technical Report dated September 4, 2017, filed on SEDAR at www.sedar.com and on the Ivanhoe Mines website at www.ivanhoemines.com.

About the Platreef Project

The Platreef Project is owned by Ivanplats (Pty) Ltd, which is 64%-owned by Ivanhoe Mines. A 26% interest is held by Ivanplats' historically-disadvantaged, broad-based, black economic empowerment (B-BBEE) partners, which include 20 local host communities with approximately 150,000 people, project employees and local entrepreneurs. In Q2 2019, Ivanplats reached Level 2 contributor status in its verification assessment on the B-BBEE scorecard. A Japanese consortium of ITOCHU Corporation, Japan Oil, Gas and Metals National Corporation and Japan Gas Corporation owns a 10% interest in Ivanplats, which it acquired in two tranches for a total investment of $290 million.

Disclosures of a scientific or technical nature in this news release have been reviewed and approved by Stephen Torr, who is considered, by virtue of his education, experience and professional association, a Qualified Person under the terms of NI 43-101. Mr. Torr is not considered independent under NI 43-101 as he is the Vice President, Project Geology and Evaluation. Mr. Torr has verified the technical data disclosed in this news release.

Ivanhoe has prepared a current, independent, NI 43-101-compliant technical report for the Platreef Project, titled The Platreef 2017 Feasibility Study Technical Report dated September 4, 2017, prepared by DRA Global, OreWin Pty. Ltd., Amec Foster Wheeler, Stantec Consulting, Murray & Roberts Cementation, SRK Consulting, Golder Associates, and Digby Wells Environmental. This technical report include relevant information regarding the effective dates and the assumptions, parameters and methods of the mineral resource estimates on the Platreef Project cited in this news release, as well as information regarding data verification, exploration procedures and other matters relevant to the scientific and technical disclosure contained in this news release in respect of the Platreef Project.

Ivanhoe Mines is a Canadian mining company focused on advancing its three principal projects in Southern Africa: the development of new mines at the Kamoa-Kakula copper discoveries in the Democratic Republic of Congo (DRC) and the Platreef palladium-platinum-nickel-copper-rhodium-gold discovery in South Africa; and the extensive redevelopment and upgrading of the historic Kipushi zinc-copper-germanium-silver mine, also in the DRC. Ivanhoe also is exploring for new copper discoveries on its wholly-owned Western Foreland exploration licences in the DRC, near the Kamoa-Kakula Project.

Forward-looking statements and information involve significant risks and uncertainties, should not be read as guarantees of future performance or results and will not necessarily be accurate indicators of whether or not such results will be achieved. A number of factors could cause actual results to differ

materially from the results discussed in the forward-looking statements or information, including, but not limited to, the factors discussed under "Risk Factors" and elsewhere in the company's MD&A, as well as the inability to obtain regulatory approvals in a timely manner; the potential for unknown or unexpected events to cause contractual conditions to not be satisfied; unexpected changes in laws, rules or regulations, or their enforcement by applicable authorities; the failure of parties to contracts with the company to perform as agreed; social or labour unrest; changes in commodity prices; and the failure of exploration programs or studies to deliver anticipated results or results that would justify and support continued exploration, studies, development or operations.

This news release also contains references to estimates of Mineral Resources. The estimation of Mineral Resources is inherently uncertain and involves subjective judgments about many relevant factors. Mineral Resources that are not Mineral Reserves do not have demonstrated economic viability. The accuracy of any such estimates is a function of the quantity and quality of available data, and of the assumptions made and judgments used in engineering and geological interpretation, which may prove to be unreliable and depend, to a certain extent, upon the analysis of drilling results and statistical inferences that may ultimately prove to be inaccurate. Mineral Resource estimates may have to be re-estimated based on, among other things: (i) fluctuations in platinum, palladium, gold, rhodium, copper, nickel or other mineral prices; (ii) results of drilling; (iii) results of metallurgical testing and other studies; (iv) changes to proposed mining operations, including dilution; (v) the evaluation of mine plans subsequent to the date of any estimates; and (vi) the possible failure to receive required permits, approvals and licences.

The company's actual results could differ materially from those anticipated in these forward-looking statements as a result of the factors set forth in the "Risk Factors" section and elsewhere in the company's MD&A for the quarter ended September 30, 2019 and its Annual Information Form.

To view the source version of this press release, please visit https://www.newsfilecorp.com/release/51437