Toronto, Ontario--(Newsfile Corp. - November 7, 2019) - Rockcliff Metals Corporation (CSE: RCLF) (FSE: RO0A) (WKN: A2H60G) ("Rockcliff" or the "Company") is pleased to announce the completion of a phase 2, 17-hole helicopter supported drill program at the Company's Laguna Gold Property ("Laguna") in Snow Lake, Manitoba. KG Exploration (Canada) Inc., an affiliate of Kinross Gold Corporation ("Kinross"), who optioned Laguna from the Company in July 2018, completed the phase 2 exploration work. Kinross may earn up to a 70% interest in Laguna and the Lucky Jack gold properties by spending $5,500,000 over the 6 year term of the option agreement. Rockcliff is a major junior developer and explorer in the Flin Flon-Snow Lake greenstone belt, the largest Paleoproterozoic Volcanogenic Massive Sulphide ("VMS") district in the world, hosting mines and deposits containing copper, zinc, gold and silver and also primary gold deposits and mines.

Laguna hosts the historic Rex-Laguna gold mine, Manitoba's first and highest-grade former gold mine located within the Flin Flon-Snow Lake greenstone belt. Periodic gold mining from the Laguna quartz vein, between 1916 and 1939, produced over 60,000 ounces of gold with an average of 18.7 gpt. Laguna includes 28 contiguous mining claims totalling 3,501 hectares.

Kinross completed a total of 3,203 metres of drilling in 17 holes over a portion of the Laguna gold mine trend, a six kilometre long corridor of prospective geology and quartz veining. All drill holes intersected quartz veining with 11 of 17 holes intersecting veining/shearing over a minimum of one metre in core length. The program centered on the extension of the Laguna Vein System and the Kiski Vein System

Laguna Vein System (see Figure 1): Nine of 14 holes intersected the the main quartz vein estimated to be extensions of the Laguna quartz vein. Three of the holes intersected visible gold. Typical mineralization included 1% arsenopyrite in strongly sericitized bands over one to three metres in proximity to quartz veins in a strongly silicified rhyolite. Arsenopyrite is predominantly disseminated within sericitized zones and follow along hairline fractures and vein margins. Secondary quartz veins were observed often in areas above mined out stopes, with variable widths and mineralized with approximately 1% to 5% disseminated and fracture filling arsenopyrite.

All holes have been sampled and assay results are presently pending. 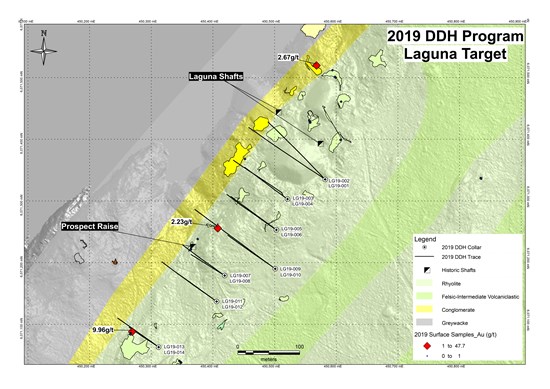 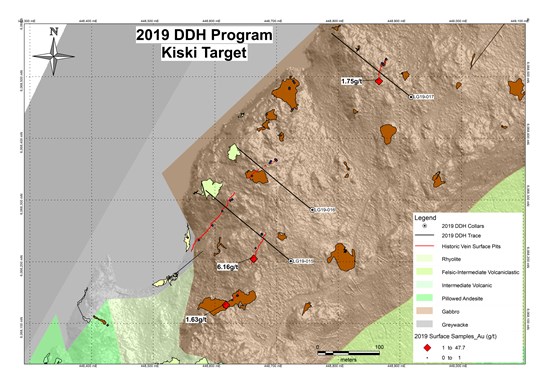 Ken Lapierre P.Geo., VP Exploration of Rockcliff, a Qualified Person in accordance with Canadian regulatory requirements as set out in NI 43-101, has read and approved the scientific and technical information that forms the basis for the disclosure contained in this press release.

The main terms of the DOA, dated July 19, 2018, provide Kinross with the right to earn a 70% interest in both properties by spending a minimum of $5,500,000 collectively in exploration expenditures over six years.

Rockcliff is a well-funded Canadian resource development and exploration company with near-term copper production potential, and a fully functional +1000 tpd permitted leased processing and tailings facility. The Company owns and options several advanced-stage, high-grade copper and zinc dominant VMS deposits in the Snow Lake area of Manitoba. The Company is a major landholder in the Flin Flon-Snow Lake greenstone belt which is home to the largest Paleoproterozoic VMS district in the world, hosting mines and deposits containing copper, zinc, gold and silver. The Company's extensive portfolio of properties totals over 4,500 square kilometres and includes eight of the highest-grade, undeveloped VMS deposits and several lode-gold properties including the historic Rex-Laguna gold mine, Manitoba's first and highest-grade gold mine.

The Canadian Securities Exchange does not accept responsibility for the adequacy or accuracy of this news release.

To view the source version of this press release, please visit https://www.newsfilecorp.com/release/49537

Sign up to receive news releases by email for Rockcliff Metals Corp. or all companies belonging to the Mining/Metals, Energy Metals industries.