CannaVcell Announces Stable Production of Cannabis Cells, Trichomes, and Cannabinoids Without the Need to Grow the Cannabis Plant Itself

Vancouver, British Columbia--(Newsfile Corp. - September 26, 2019) - Using breakthrough proprietary and patented technology developed by BioHarvest Ltd, CannaVcell (CSE: CNVC) (the worldwide exclusive licensee of this technology for Cannabis applications) is announcing today the first ever production of Cannabis cells in suspension, with a cannabinoid profile identical to that of the source plant - without the need to grow the plant itself.

This represents the successful completion of the development program that commenced in October of 2018 and aimed to prove the feasibility of BioHarvest's previously proven technology for the production of Cannabinoids and other Cannabis derived compounds.

The program was successfully completed 4 months ahead of schedule. The goals for this development stage have been exceeded, as CannaVcell went one step beyond production in liquid media (or suspension) at lab-scale, where it demonstrated fully grown trichomes, and stably produced Cannabis cells and cannabinoids in a small scale bioreactor (Figure 04).

This achievement marks a turning point in the Cannabis industry as it will enable to commercially produce Cannabis derived active ingredients without the need to grow the plant. BioHarvest's technology platform ensures lower cost of production, contaminate-free, reduced capital expenditure requirements, and most importantly - a consistent contaminate-free product.

“It is nothing short of a revolution in the Cannabis world and should be celebrated by the entire industry” said Dr. ZakiRakib co-founder and CEO. He added “we have been waiting for this milestone since we embarked on this journey. We can now check the mark on the feasibility of using BioHarvest’s biofarming technology for the production of Cannabis derived products. In fact, we now shift our attention and resources to the large-scale production process”.

BioHarvest expects to complete an initial scale-up process, and reach a commercial production capacity of 2 tons/year by year-end 2020. A significantly larger facility is expected to be completed by year-end 2021. The Bioharvest team has successfully developed industrial scale production processes for other (non-Cannabis) plant cells in the past, and has commercially produced and distributed such products.

“This is a substantial milestone for CannaVcell and a great achievement for BioHarvest’s R&D team. To the best of myknowledge, no other research group or company in the industry has been able to show stable trichome and cannabinoid production through Cannabis cells grown in suspension.

It appears as if all other research groups that have been focusing on Cannabis cell production have only been able to stably grow trichomes and/or produce cannabinoids in solid media. Doing so in suspension brings CannaVcell and BioHarvest one step closer to commercial scale-up.

I’ve been following CannaVcell’s and BioHarvest’s R&D progress for over a year, and I believe this team has crossed asignificant technology threshold. This technology platform can potentially be used for low cost Cannabis derived compound production, for efficient cannabis breeding and secondary metabolite elicitation, as well as for a wide range of R&Dapplications.” said Mr. Eitan Popper former President and Co-Founder of MedReleaf.

We are delighted to have achieved this milestone” said Dr. Yochi Hagay, CTO of BioHarvest. Dr. Hagay added “when westarted the program in October we were tasked to prove the feasibility of the biofarming technology for Cannabis. We ex- ceeded all expectations. We are the first company in the world that has been able to grow cannabis cells that produce six different types of cannabinoids THCA, THC, CBDA, CBD, CBN, CBC, all of which are identical to the cannabinoids produced in the relevant Cannabis flower. I believe this ground breaking technology will usher the cannabis space into a future thatenjoys the benefits of low-cost, consistent sources of a complex of cannabinoids at industrial scale with all characteristics that are crucial to global Pharma and CPG companies”.

To view an enhanced version of Figure 1, please visit:
https://orders.newsfilecorp.com/files/6168/48185_cv6.jpg 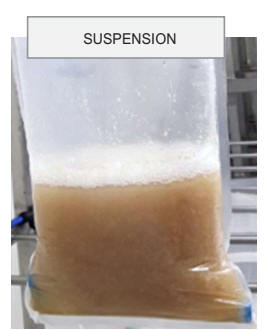 To view an enhanced version of Figure 2, please visit:
https://orders.newsfilecorp.com/files/6168/48185_cv8.jpg 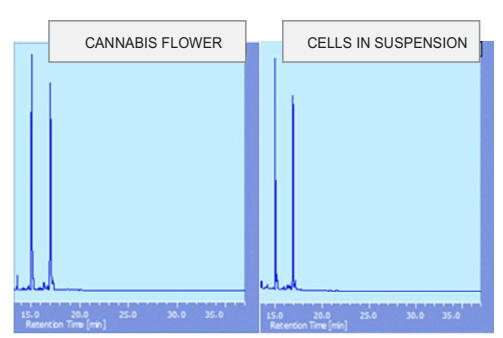 Figure 3: presents a THCA and CBDA profile produced in cannabis cells grown in liquid media (3B) which is identical to the profile of cannabis flowers (3A). CBDA and THCA were analyzed by HPLC.

Figure 4: (A & B) shows Cannabis cells powder that was produced in a small scale bioreactor.

A Webinar with Dr. Zaki Rakib, Co-Founder and CEO of CannaVcell will be held next
Wednesday October 2nd, 2019. More information will soon be announced.

Based in Vancouver BC, Canna-V-Cell Sciences Inc. (CNVC) is the exclusive Cannabis worldwide licensee of the proprietary and patent protected BioHarvest technology. It is the first and only industrial large-scale plant cell growth technology  capable of directly and constantly producing the active plant ingredients without the necessity to grow the plant itself. By adopting this technology and building adequate cells production capacity, Canna-V-Cell's objective is to become the lead- ing supplier of Cannabis for both the medicinal and recreational legal use.

Forward-Looking Statements Information set forth in this news release contains forward-looking statements that are based on assumptions as of the date of this news release. These statements reflect management's current estimates, beliefs, intentions and expectations. They are not guarantees of future performance. The Company cautions that all forward looking statements are inherently uncertain and that actual performance may be affected by a number of material factors, many of which are beyond the Company's control. Such factors include, among other things, risks and uncertainties relating to the fact that the Company would require additional funds in order to construct a commercial biochamber facility and risks related to the adaption of the BioHarvest technology to cannabis. Accordingly, actual and future events, conditions and results may differ materially from the estimates, beliefs, intentions and expectations expressed or implied in the forward looking information. Except as required under applicable securities legislation, the Company undertakes no obligation to publicly update or revise forward-looking information.

Neither Canadian Securities Exchange nor its Regulation Services Provider accepts responsibility for the adequacy or accuracy of this release.

To view the source version of this press release, please visit https://www.newsfilecorp.com/release/48185

Sign up to receive news releases by email for BioHarvest Sciences Inc. or all companies belonging to the Cannabis Cultivator, Biotechnology, Pharmaceuticals, Cannabis industries.