In preparation for upcoming drilling, the Company completed a mapping, prospecting and sampling program. The Company recently reported significant copper and gold results from trenches at the "Man" area including 0.89% copper over 46.0 metres (see news release dated August 22, 2019) and the remainder of this work is reported herein. Dunnedin is very encouraged by these new results, which have generated new target areas and helped focus our upcoming drill program.

Select assay results from prospecting work at MPD are provided in Table 1. Highlights include:

Claudia Tornquist, President and CEO of Dunnedin said, "Results from surface sampling continue to identify significant surface mineralization across the MPD property, highlighting the opportunity for a major discovery within this under-explored, consolidated land package. We are looking forward to the imminent start of our drill program and are especially excited that our first soil sampling program has already recognized new targets for follow-up in areas of the property not yet drilled by previous explorers."

*Interval represents trench sample length and is not intended to reflect true width. Grab samples are selective in nature and not necessarily representative of mineralization on the property 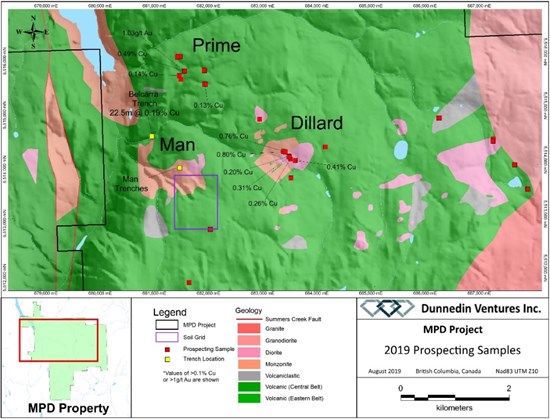 A series of six grab samples from copper-bearing boulders in the Dillard area are described as volcanic rocks hosting irregular quartz-carbonate veining with disseminations and stringers of chalcopyrite, pyrite and minor malachite. Similarly, mineralized rocks were also noted in the Prime area where a chip and grab sample contained significant gold and silver. Historic mapping in both areas reference Nicola Group volcano-sedimentary rocks being intruded by porphyritic syenite-monzodiorite dykes and stocks.

A steep slope referred to as the Belcarra trench was sampled one kilometre northwest of the Man trenches. Copper at Belcarra occurs as malachite on fracture/contact surfaces, or as chalcopyrite disseminations over a 22.5 metre section of exposed and altered bedrock. Mineralized host rocks at Belcarra look very similar to the variably-altered porphyritic intrusive and volcanic assemblage observed in the copper-bearing Man trenches.

The Company has identified significant copper and gold-in-soil anomalies on the SE Man soil grid in an area south east of Man and not yet tested by drilling.

Samples of "B" horizon subsoil were collected at 50 metre intervals along sample lines spaced 100 metres apart. Historic grids in the area did not test for trace elements or precious metals. New assay results from the 2019 soil survey highlight gold values immediately south of the Man trenches and pronounced copper, gold and silver anomalies central to the grid and 550 metres south of the Man trenches. These anomalies reflect the metallic suite targeted in porphyritic host rocks and are analogous to known mineralization and the copper-in-soil anomaly present at Man. (see Figure 2). 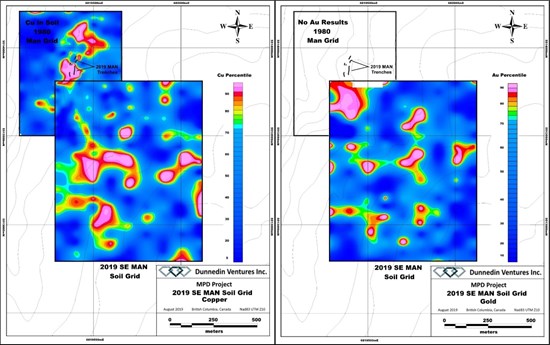 Anomalous copper values up to 201 ppm and gold values up to 136 ppb overlap in the north central portion of soil survey, with some offsets either due to peripheral zoning or depth of overburden. Table 2 shows value ranges and anomalous thresholds for copper-gold-silver on the 2019 SE Man soil geochemical survey.

The MPD Project's Nicola Belt geology has many similar characteristics to nearby alkalic porphyry systems at the Copper Mountain Mine to the south, and New Gold's New Afton Mine to the north. Past exploration has identified numerous copper showings over a large, 10 square kilometre area. Copper and gold mineralization extend from surface, with earlier drilling on the property rarely testing below 200 metres vertical depth. Several historic holes that exceeded 200 metres indicate the potential for porphyry-type mineralization of significant depth and size.

Dunnedin has applied for a multi-year area-based Exploration Permit with the British Columbia Ministry of Energy, Mines and Petroleum Resources requesting authorizations allowing up to 18 drill pads and up to 10 mechanical trenching sites in 2019 and 2020. This application is in the final stages of the review process by regulators and drilling will commence upon receipt of the permit, which the Company expects in September.

Jeff Ward, P.Geo, Vice President Exploration and the Qualified Person as defined by National Instrument 43-101, has reviewed and approved the technical information contained in this release.

The advanced-stage Kahuna diamond project in Nunavut hosts a high-grade, near surface inferred diamond resource and numerous kimberlite pipe targets. Dunnedin has title to 809 km2 of mineral tenure, with diamond rights covering 1,664 km2 in Nunavut, 26 kilometres from Rankin Inlet and adjacent to Agnico Eagle's Meliadine gold mine. Working with its advisor and largest shareholder Dr. Chuck Fipke Dunnedin's exploration at Kahuna is focused toward the discovery of diamondiferous kimberlite pipes.

Based in Vancouver, Dunnedin is backed by a world-renowned team of exploration experts with decades of combined exploration experience and significant capital market strength. Dunnedin is part of the Discovery Group of companies led by John Robins, one of the most successful mining entrepreneurs in Canada.

To view the source version of this press release, please visit https://www.newsfilecorp.com/release/47384

Sign up to receive news releases by email for Kodiak Copper Corp. or all companies belonging to the Mining and Metals, Precious Metals, Diamonds industries.