Toronto, Ontario--(Newsfile Corp. - August 19, 2019) - Romios Gold Resources Inc. (TSXV: RG) (OTC Pink: RMIOF) (FSE: D4R) ("Romios" or the "Company") is pleased to announce that all assay results from the June diamond drilling program on the Company's Lundmark-Akow Lake Cu-Au-Ag Project in Northwestern Ontario have been received and have significantly expanded the potential of the gold discovery announced in July (8.64 g/t Au over 4.75 m, see Romios news release July 10, 2019). The gold-bearing quartz-pyrrhotite discovery vein was intersected in hole RGR-19-5 at the eastern end of a coincident VTEMTM airborne EM conductor which is 300 to 400 metres long. A similar but lower grade vein was intersected in hole RGR-19-6, drilled from the same set-up as hole RGR-19-5 but in the opposite direction to test a parallel series of multiple conductors. This vein was intersected 330 m NE of the discovery vein at the tail end of a 700 m long conductor and assayed 0.5 g/t Au over 7.35 m with individual assays between 96 ppb and 1.9 g/t Au. Drilling is planned in September to test the stronger central portions of both EM conductors. Assay results of the 2019 program are summarised in Table One below and drill hole locations are shown on Figure One below.

A potentially very significant additional discovery in both holes RGR-19-5 and RGR-19-6 is the occurrence of several large, sporadically gold-mineralized carbonate (mainly calcite) veins in close proximity to the gold-bearing quartz-pyrrhotite veins. These veins have distinctive, well developed open-space filling textures typical of the barren to weakly mineralized carbonate veins found near the high-grade gold veins in the Newmont Goldcorp Red Lake mine as well as some of the major deposits in the Timmins-Porcupine gold camp. Such vein textures are thought to reflect high pressure, deep seated and long lived fluid systems that were an integral part of gold ore formation in these major gold camps. A 6.5 m wide carbonate vein in drill hole RGR-19-6 returned individual gold values ranging from nil to 2.96 g/t Au and averaged 0.54 g/t Au. A large calcite vein in RGR-19-5 averaged 0.7 g/t Au over 5.7 m with individual assays from ~nil to 1.85 g/t Au. A second, 7.5 m wide, calcite vein in this hole returned lower, but still anomalous values between 15 and 730 ppb Au. This latter vein is particularly significant for the presence of a one metre wide lamprophyre dyke within the vein, suggesting that the mineralized vein structures are deep seated. This same type of carbonate vein is generally barren to weakly mineralized in the Red Lake and Timmins-Porcupine camps consequently the presence of gold grades up to 2.96 g/t Au in the Lundmark-Akow Lake veins is considered encouraging for the overall potential of this area.

In addition to the gold bearing Quartz-Pyrrhotite vein, drill hole RGR-19-6, as well as the adjacent drill hole RGR-19-5, intersected scattered zones of chalcopyrite vein mineralization in otherwise fresh looking basalt. These veinlets were observed from the bedrock surface (~4 metres depth) to a hole depth of 41m in RGR-19-6, and assayed 0.26% Cu over 33.7 m with gold values ranging from nil to 2.85 g/t Au. This mineralization flanks a blue quartz-eye - feldspar porphyry which is also locally mineralized and returned an intercept of 2.3 m grading 2.2 g/t Au and 0.37 % Cu. This type of intrusion is associated with many VMS (volcanogenic massive sulphide) deposits and its discovery along with the widespread copper mineralization in the adjacent volcanic rocks greatly enhances the geological potential of this area. Six VTEMTM conductors remain to be tested in the immediate vicinity of holes RGR-19-5 and RGR-19-6 while another seven conductors occur along strike within 3 km. The drill used in this program is on site for a follow-up program expected to begin in September, 2019.

Drill holes RGR-19-1 to 4 targeted the northward continuation of the same VMS style alteration zone that led to the discovery of the high grade Cu-Au-Ag massive sulphide at Atim Lake North in 2017 (see Romios news release September 19, 2017). These holes were successful in extending the known length of this impressive alteration zone from 3 km to 7 km. Several conductors flanking this alteration pathway are now considered high priority VMS targets which will be tested in a future drill program.

In addition to the aforementioned gold and massive sulphide targets, Romios' Lundmark-Akow Lake claims cover the shear zone-hosted Spence showing which returned grab sample assays in 1997 ranging from 0.358 to 38.6 oz/t Au from a blast trench in copper-mineralized sheeted veins. Soil sampling conducted in June 2019 revealed a prominent copper anomaly up to 1,660 ppm Cu over a linear magnetic low that flanks the mineralized outcrops. Additional sampling will be undertaken in September to delineate the extent of this anomalous structure.

The Company has a 100% working interest in the 5,035 hectare (12,442 acres) Lundmark-Akow Lake property, part of which is subject to a 3% net smelter return royalty held by a corporation controlled by the president and CEO of the Company.

John Biczok, P. Geo., Vice-President, Exploration for Romios commented "Results from holes RGR-19-5 and RGR-19-6 confirm the presence of significant gold and copper mineralization across a 330 m wide portion of a large and previously untested cluster of EM conductors that is at least 800 m wide and 3 km long. The significant length of the individual conductors, which are coincident with the wide mineralized veins, plus the broad zones of copper-gold mineralization, the presence of the large mineralized calcite veins, and the abundance of quartz-feldspar porphyry intrusions, all suggest that there is a high probability of finding a significant mineralized system in this area. The presence of the large carbonate veins with distinctive Red Lake style open-space filling textures and associated lamprophyre dykes in particular is compelling evidence for the deep-seated and potentially widespread nature of the mineralizing fluids".

All samples were submitted to the ISO/IEC 17025 accredited Actlabs laboratory in Thunder Bay, Ontario for assay. As a matter of procedure, a rigorous quality assurance and quality control program was implemented to ensure reliable assay results. The technical information in this news release has been reviewed and approved by John Biczok, P. Geo., VP-Exploration for Romios and a Qualified Person as defined by National Instrument 43-101. In addition to his extensive experience exploring for a wide variety of ore deposit types across Canada and India, Mr. Biczok spent 12 years conducting exploration and research at the Musselwhite mine just 18 km from the Lundmark-Akow Lake property.

Romios Gold Resources Inc., a progressive Canadian mineral exploration company established in 1995, is engaged in precious and base metal exploration primarily focused on gold, silver and copper. In addition to the Lundmark-Akow Lake property in Ontario, it has extensive claim holdings covering porphyry copper-gold prospects in the "Golden Triangle" of British Columbia as well as the La Corne molybdenum property in Quebec and the Scossa gold property in Nevada. The Company also retains a 2% NSR on the Hislop gold property in Ontario.

This News Release contains forward-looking statements which are typically preceded by, followed by or including the words "believes", "expects", "anticipates", "estimates", "intends", "plans" or similar expressions. Forward-looking statements are not guarantees of future performance as they involve risks, uncertainties and assumptions. We do not intend and do not assume any obligation to update these forward- looking statements and shareholders are cautioned not to put undue reliance on such statements. 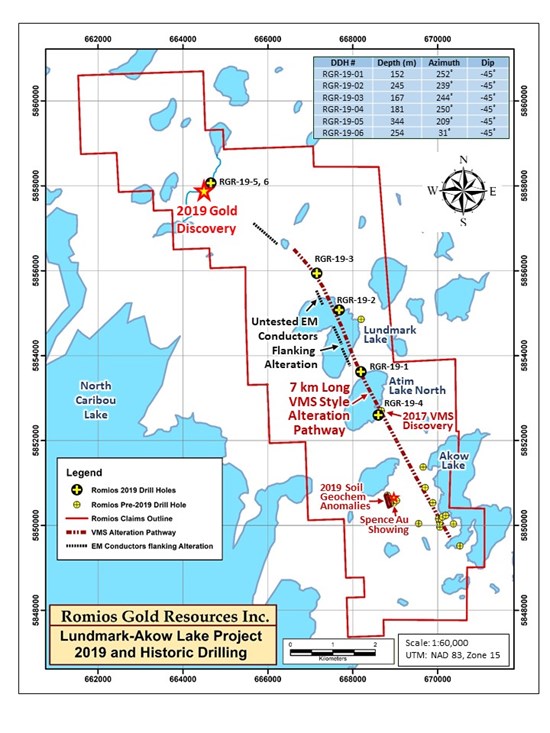 Figure 1: Map of the 2019 and historic drilling at Lundmark-Akow Lake

To view the source version of this press release, please visit https://www.newsfilecorp.com/release/47037